Warning: Use of undefined constant wp_cumulus_widget - assumed 'wp_cumulus_widget' (this will throw an Error in a future version of PHP) in /home/customer/www/whatifpost.com/public_html/wp-content/plugins/wp-cumulus/wp-cumulus.php on line 375
 Want to know why the GOP health plan will be devastating for millions of Americans? Follow the money.
≡ Menu

Want to know why the GOP health plan will be devastating for millions of Americans? Follow the money. 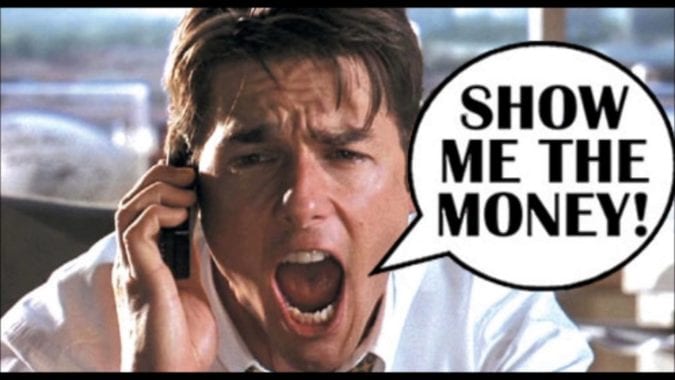 You on the phone with your Senator, asking about the AHCA.

Senate majority leader Mitch McConnell is reportedly planning a vote on the Republican healthcare bill sometime next week. It’s hard to overstate how crazy that is– a draft of the bill still hasn’t been released, and the vast majority of Senators (Democratic or Republican) still haven’t seen it. When the Affordable Care Act was passed, senators had months to read the bill (and that was after months of bipartisan negotiations). The ACA had 25 consecutive days of floor time for senators to debate and amend the bill; McConnell wouldn’t commit to more than 10 hours for this one. Meanwhile, Republican senators can’t answer simple yet critical questions about the bill, like “what problems is it trying to solve” or “what would the bill accomplish?”

It’s pretty clear that Republicans believe that if Americans knew what’s in the bill, they’d hate it— so the strategy seems to be to pass it before most people find out. There will be just a week between the release of the Senate’s bill and the actual vote, and just a few days between the CBO score and the vote.

But here’s the thing– based on what we do know, we can already tell that the Senate bill will be worse than the ACA. We know this because of well, math.

For all their talk about repealing Obamacare, House Republicans kept most of the basic structure intact when they passed the American Health Care Act. The AHCA, like Obamacare:

While the AHCA keeps most of the ACA’s basic provisions in one form or another, it absolutely devastates the funding that makes them work. Check out this chart from the Congressional Budget Office’s score of the AHCA: 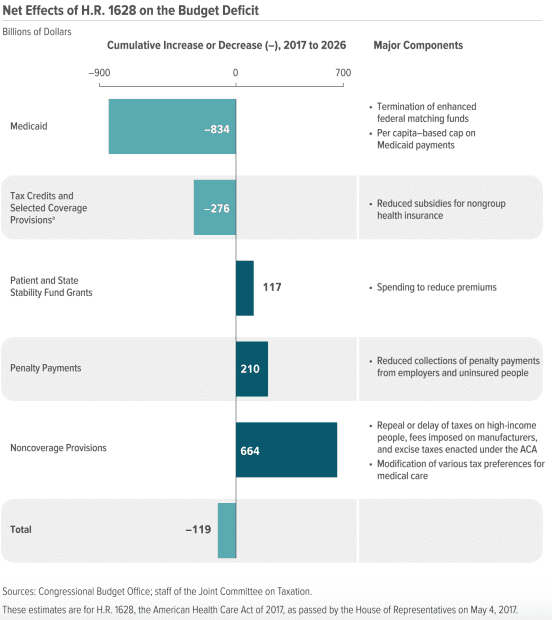 Over ten years, the AHCA cuts an enormous $864 billion from Medicaid. Most of that comes from eliminating the ACA’s Medicaid expansion, which provides coverage to anyone making below 138% of the poverty line (currently that’s $16,400 for an individual, $33,600 for a family of four), in states that chose to expand. Another $276 billion comes from cuts to assistance for people who purchase private coverage. The House version of the AHCA cuts funding from the tax credits that help make premiums affordable; and it ditches another provision in Obamacare that makes lowers deductibles for people making less than 250% of the poverty line (that’s $29,700 for an individual, $60,750 for a family of four).

Altogether that’s $1.1 trillion in cuts to health spending. The AHCA then replaces a little over $100 billion of that with grants that states can use to shore up various health programs. That means the ACA cuts $1 trillion dollars in spending on healthcare, mainly for poor and middle class Americans, and uses that money to offset tax cuts on corporations and the wealthy (individuals who make over $200,000 per year, and couples who make more than $250,000).

Now sometimes cutting health spending is a good thing. The U.S. spends about $3.4 trillion dollars on healthcare annually— thousands of dollars more per person than any other industrialized country. One thing that Democrats and Republicans agree on is that we need to provide care more efficiently, so that we can bring spending down while ensuring that people have access to quality care. The Affordable Care Act is full of examples where Congress tried to do that: for example hospitals are now penalized for avoidable readmissions, which are both expensive and dangerous for patients. It also cut Medicare reimbursement rates to hospitals and cut overpayments to Medicare Advantage, saving the government money while maintaining access to care for patients.

The spending cuts in the AHCA don’t do any of that. The AHCA saves money by simply reducing access to any kind of care. A few Republicans have tried to argue that the AHCA’s changes to Medicaid will make the program more efficient, and that its small tweaks to health savings account (HSA) rules will encourage health consumers to shop around for better deals. Even if that were true, and it probably is not (Medicaid in most states is administered by managed care organizations, which already have an incentive to keep per capita costs down; as for HSA’s, if you’ve ever tried to “shop around” for a deal on a health procedure, you know what a nightmare that is), the scale of the Republican bill’s cuts are so massive that there’s no way they can be made up with increased efficiency. Millions of Americans will lose coverage:

Which brings us back to the Senate bill. This week, Republican senators released a video saying that the status quo is unacceptable. Maybe– the ACA isn’t perfect after all. But by keeping the structure of the Affordable Care Act, while gutting the money that makes it work (and the taxes on the wealthy that pay for that spending), Senate Republicans have all but guaranteed that their bill will be worse.

Previous post: An American Health Care Act explainer: what it does, the few who will benefit, and the millions who will lose coverage