Warning: Use of undefined constant wp_cumulus_widget - assumed 'wp_cumulus_widget' (this will throw an Error in a future version of PHP) in /home/customer/www/whatifpost.com/public_html/wp-content/plugins/wp-cumulus/wp-cumulus.php on line 375
 Ten OTHER ways health reform helps women
≡ Menu

It seems like we only hear about health reform’s effect on women when the subject turns to reproductive rights, like it did last week. But there’s much more to the new law, as Marcia D. Greenburger, founder and co-president of the National Women’s Law Center points out:

“The health care industry and health care insurance in general has been riddled with the most discriminatory and unfair practices to women. This law is a giant leap forward to dismantling the unfairness that has been a part of the system.”

Here are ten things in the Affordable Care Act that will help end discrimination and improve women’s health. We bet you haven’t heard of most of them.

Before the Affordable Care Act, insurers in most states could charge women more than men for the exact same coverage (even for policies that didn’t include maternity care)– a practice called “gender rating.”

“Gender rating has taken a particular toll on smaller or midsize businesses with many women, like home-health care, child care and nonprofits. As a result, some businesses have been unable to offer health coverage or have been able to afford it only by using plans with very high deductibles.”

Starting in 2014, insurance companies will no longer be able to charge women more than men.

A number of the “pre-existing conditions” insurers used to deny coverage were specific to women:

Advocates for women’s health said one of the new law’s benefits would be to ban the denial of health coverage to women who have had a prior Caesarean section or been victims of domestic violence. Some companies providing individual policies have refused coverage in those circumstances, regarding Caesareans or beatings as pre-existing conditions that were likely to be predictors of higher expenses in the future.

The Times article cites the example of one woman who was denied coverage because she had a medically mandated C-section. The insurance company explained in a letter that if she had been “sterilized” she would have been eligible for coverage.

Starting in 2014, insurers can no longer deny coverage based on pre-existing conditions.

3. Insurance companies have to include maternity coverage

Often this was excluded in individual policies. Now it is considered an “essential health benefit.”

The Affordable Care Act says that preventative services deemed “highly effective” by the U.S. Preventive Services Task Force have to be covered without a copay or deductible. These included a number of services particularly important for women: 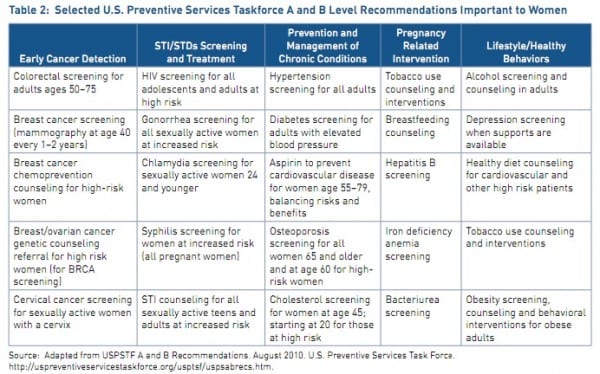 Senator Barbara Mikulski (D-Maryland) also pushed for an amendment instructing the Dept. of Health and Human Services to look into additional preventive services that women might need, based on recommendations from the nonpartisan Institute of Medicine. Those services, which insurers also have to provide for free starting this August, include:

It’s especially important that these services will be covered without a copay or deductible, since women are more likely to be low income, get paid less for the same work as men, and are more likely to report cost as a barrier to care: 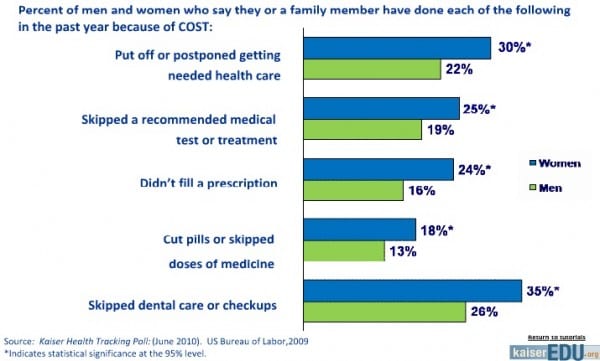 Working mothers have had to carefully tailor their schedules so that they can pump milk in the middle of the day, and avoid stares when they put bottles in the communal refrigerators. Some have to use a bathroom stall to pump milk, as there is no other space available.

Nursing mothers will now get additional support, thanks to page 1239 of the health care bill that President Obama recently signed into law. It requires employers to provide “a place, other than a bathroom, that is shielded from view and free from intrusion from co-workers and the public, which may be used by an employee to express breast milk.” Only companies with less than 50 employees can claim it’s an undue hardship.

Besides requiring large employers to provide a place where nursing mothers can express breast milk, the new law also says that employers have to provide a reasonable break time to do so.

The new law provides grants to local community organizations, hospitals and even state or local governments to provide education and services for the diagnosis and management of postpartum depression. Senator Robert Menendez (D-NJ), who sponsored the bill, which was added to the Affordable Care Act, has more information on his website.

7. Changes to Medicaid to benefit women

Medicaid covers more than 4o% of all births nationwide, but many women lose coverage after having the baby, because Medicaid’s post-pregnancy income guidelines are much more restrictive. 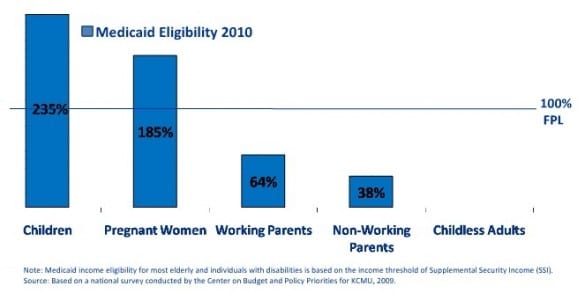 Currently, pregnant women are eligible if they make up to 185% of the federal poverty line (FPL), but most working parents have to make less than 64% of FPL to qualify. Under the new law anyone making less than 138% of FPL will be eligible for Medicaid, allowing many low income mothers to maintain their coverage after giving birth. 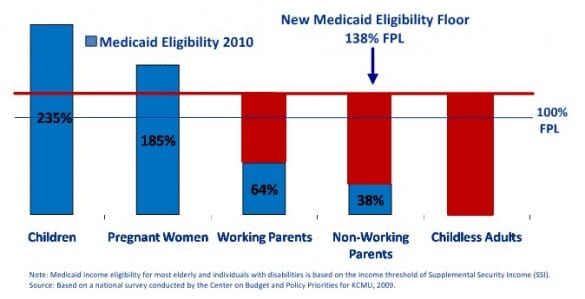 Under the new law 100% of nurse midwife services will be covered under Medicare. It may not sound like a big deal since Medicare covers very few births, but the Medicare payment schedule is used by many insurers and state Medicaid programs to determine what services they’ll cover. The new law also guarantees that Medicaid will cover services provided by free-standing birth centers.

The Maternal, Infant, and Early Childhood Home Visiting Program will provide $1.5 billion in grants to states to develop home-visitation programs for pregnant women and families with young children. Through these programs, nurses, social workers, or other professionals will meet with at-risk families in their homes and connect them to needed services like health care, developmental services for children, early education, parenting skills, child abuse prevention, and nutrition education or assistance.

According to a statement from the Department of Health and Human Services, the program is based upon “strong research evidence that these programs can improve outcomes for children and families and also yield Medicaid savings by reducing preterm births and the need for emergency room visits.”

For way more information on the benefits of home-visitation programs, the Center for American Progress has a great (and thorough) brief on the issue.

The new law formally establishes Offices on Women’s Health in major federal agencies, including Health and Human Services, the Centers for Disease Control, and the FDA among others.

The law also creates a National Women’s Health Information Center to facilitate exchange of information regarding health promotion, prevention, major advances in research, and other relevant developments in women’s health.

[Note on Sources: Graphs and charts were taken from Kaiser Family Foundation’s issue brief (PDF) and multimedia tutorial on the Impact of Health Reform on Women’s Access to Coverage and Care.]

Next post: Story of the week: The Latest “Doc Fix”