Warning: Use of undefined constant wp_cumulus_widget - assumed 'wp_cumulus_widget' (this will throw an Error in a future version of PHP) in /home/customer/www/whatifpost.com/public_html/wp-content/plugins/wp-cumulus/wp-cumulus.php on line 375
 Tally in the courts so far: Individual mandate 2, Opponents 1
≡ Menu

Tally in the courts so far: Individual mandate 2, Opponents 1 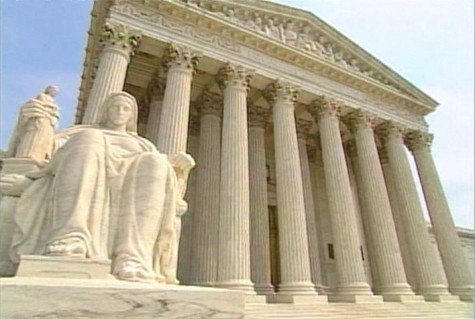 You may have seen in the news recently  one federal judge ruled that a key part of the new health reform law is unconstitutional. Despite the fact that this was the top headline on every newspaper at my local corner store, the ruling actually isn’t that big a deal.  Here’s why.

1. Other federal judges have ruled that the same provision IS constitutional
There are currently twenty-four lawsuits making their way through federal courts around the country that challenge the constitutionality of the new law.  Nearly every case deals with the individual mandate— the law’s requirement that most Americans obtain health insurance.  Two federal judges have already ruled that the individual mandate is constitutional.  The latest decision, by Judge Henry Hudson, is the first to rule that it’s not.

The rulings have been split along partisan lines- the judges who found the individual mandate constitutional were both President Clinton appointees, while Hudson was appointed by George W. Bush.  It’s also interesting that:

Hudson’s annual financial disclosures show that he owns a sizable chunk of Campaign Solutions, Inc., a Republican consulting firm that worked this election cycle for John Boehner, Michele Bachmann, John McCain, and a whole host of other GOP candidates who’ve placed the purported unconstitutionality of health care reform at the center of their political platforms.

In other words, the judge makes money off a company that works for Republicans who are fighting health reform.  (However, we agree with the New Republic’s Jonathan Chait— we don’t think Hudson ruled as he did for financial reasons, but “his financial interests are a window into the fact that he’s unusually likely to bend over backward to accept Republican arguments.”)

With a number of conflicting rulings, the case will almost certainly go before the Supreme Court.  Opponents of health reform say that the individual mandate goes beyond Congress’s power to regulate interstate commerce under the Constitution, but historically:

The Supreme Court has interpreted the Commerce Clause broadly, and Congress has relied on the court’s precedents to enact laws that prohibit racial discrimination in hotels and restaurants, protect endangered species and provide employees family and medical leave.

The real danger to health-care reform is not that the individual mandate will be struck down by the courts. That’d be a problem, but there are a variety of ways to restructure the individual mandate such that it doesn’t penalize anyone for deciding not to do something (which is the core of the conservative’s legal argument against the provision). The danger is that, in striking down the individual mandate, the court would also strike down the rest of the bill. In fact, that’s exactly what the plaintiff has asked Hudson to do.

Hudson pointedly refused. “The Court will sever only Section 1501 [the individual mandate] and directly-dependent provisions which make specific reference to 1501.” That last clause has made a lot of pro-reform legal analysts very happy. Go to the text of the health-care law and run a search for “1501.” It appears exactly twice in the bill: In the table of contents, and in the title of the section. There do not appear to be other sections that make “specific reference” to the provision, even if you could argue that they are “directly dependent” on the provision. The attachment of the “specific reference” language appears to sharply limit the scope of the court’s action.

3.  There may be alternatives to the individual mandate
Jonathan Gruber is an economics professor at MIT, who specializes in health policy.  He describes health reform as a three-legged stool:

Removing the individual mandate kicks out one leg of the stool.  It will stand, but only barely.  Gruber ran the numbers and found that without a mandate premiums would be 27% more expensive.  Also:

Retaining the law but repealing the mandate would newly cover fewer than 7 million people in 2019 rather than the 32 million projected to be newly covered by the law. Federal spending, however, would decline by only about a quarter under this scenario since the sickest and most costly uninsured are the ones most likely to gain coverage.

Translation: the individual mandate prevents mooching. Health insurance is really just a bunch of people pooling their money together– the money in the pool is then used to pay the medical expenses if any one of them gets sick.  If people will wait until they get sick to buy insurance, their medical bills will be paid by money in the pool, even though they didn’t contribute anything.  The individual mandate is the easiest way to prevent this type of mooching, but, according to the New York Times, there might be other ways:

One alternative to the individual mandate would create financial incentives for people to buy insurance. For example, health policy experts said, insurers could offer discounts to people who sign up early, and they could increase premiums for people who delay enrollment. Medicare imposes such late-enrollment penalties on some people who delay signing up for Part B, which covers doctors’ services, and Part D, which covers prescription drugs.

Another approach would be for insurers to limit enrollment to one or two months a year, so that consumers could not sign up on the spur of the moment, when they need care.

The individual mandate is unpopular, so it makes political sense for Republicans to oppose it.  But at the end of the day, it also makes a system that relies on private insurance possible.  As Washington Post columnist Matt Miller put it:

Conservatives, either from confusion, or for the sheer fun of taking a political bite out of Democrats, are fighting the one measure that’s essential if private insurance is to retain its central role in American health care …

[But] be careful what you wish for. By fighting the mandate needed to make private insurance solutions work, and doing nothing to ease the health cost burden on everyday Americans, you’ll hasten the day when the public throws up its hands and says, “Just give us single-payer and price controls.” Don’t think the anti-government wave this fall won’t reverse itself on health care if the most private sector-oriented health care system on earth keeps delivering the world’s costliest, most inefficient care.

Republicans really should be careful what they wish for.  As we wrote before, in the past Republicans have supported an individual mandate.  But if they continue to fight the mandate just for the sake of defeating Democrats, they may ultimately defeat the insurance industry too!

Next post: How will new EPA regulations affect our health?