Warning: Use of undefined constant wp_cumulus_widget - assumed 'wp_cumulus_widget' (this will throw an Error in a future version of PHP) in /home/customer/www/whatifpost.com/public_html/wp-content/plugins/wp-cumulus/wp-cumulus.php on line 375
 Story of the week: Birth control controversy
≡ Menu

“This is an outrage. A woman’s health decisions are a private matter between her priest and her husband.” — Stephen Colbert

It’s a little hard to believe that in 2012 providing birth control coverage for women is a controversial issue, but here we are. In this post, we’ll look at how the controversy started and what the law actually says about contraceptives.

Starting this summer, the new health law requires health insurers to cover preventive care for women without a copay. But the law didn’t specify which services counted as “preventive care”– instead the Obama Administration would make the final decision, based on recommendations from the nonpartisan Institute of Medicine (IOM). Under the final rule, women’s preventive services now covered include:

The new regulation also includes a conscience clause: churches (and other religious employers who employ mostly people of that faith) can opt out of the birth control coverage requirement.

What’s the problem then?

The Washington Post’s Sarah Kliff, in a fantastic FAQ on the contraceptive issue, explains:

“Some religious leaders say that the exemption wasn’t wide enough: That the Obama administration should allow all faith-based employers regardless of who they employ, to opt out of the new requirement if they object to contraceptives. This wider definition would exempt, among others, Catholic hospitals.”

Catholic hospitals and universities are massive employers (and the recipients of a lot of federal money)– an exemption for them could affect millions of women, as Linda Greenhouse points out in a great New York Times op-ed:

Permitting Catholic hospitals to withhold contraception coverage from their 765,000 employees would blow a gaping hole in the regulation. The 629-hospital Catholic health care system is a major and respected health care provider, serving one in every six hospital patients and employing nearly 14 percent of all hospital staff in the country.

Which is why, despite aggressive lobbying by the U.S. Conference of Catholic Bishops, the Obama administration did not expand the exemption. They argue that the new regulation strikes the right balance between protecting religious freedom and protecting women’s access to preventive services. Secretary of Health Kathleen Sebelius wrote in an editorial:

“It’s important to note that our rule has no effect on the longstanding conscience clause protections for providers, which allow a Catholic doctor, for example, to refuse to write a prescription for contraception. Nor does it affect an individual woman’s freedom to decide not to use birth control. And the president and this administration continue to support existing conscience protections.”

Republicans and the U.S. Conference of Catholic Bishops on the other hand are claiming that President Obama has declared war on religious freedom.

Why this is a dumb controversy

1. Most Catholics support the president’s decision: 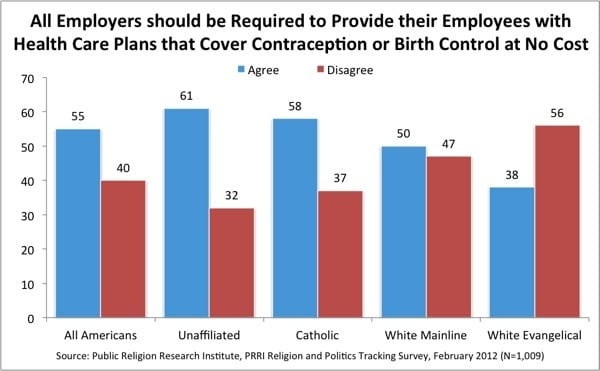 A similar poll asked voters specifically whether Catholic hospitals and universities should be included under the birth control requirement, with roughly the same results:

It’s no surprise then, many Catholic universities already offer birth control coverage as part of their health plans.

2. It’s not that different from the existing law

In December 2000, the Equal Employment Opportunity Commission ruled that companies that provided prescription drugs to their employees but didn’t provide birth control were in violation of Title VII of the 1964 Civil Rights Act, which prevents discrimination on the basis of sex. That opinion, which the George W. Bush administration did nothing to alter or withdraw when it took office the next month, is still in effect today—and because it relies on Title VII of the Civil Rights Act, it applies to all employers with 15 or more employees. Employers that don’t offer prescription coverage or don’t offer insurance at all are exempt, because they treat men and women equally—but under the EEOC’s interpretation of the law, you can’t offer other preventative care coverage without offering birth control coverage, too.

Reproductive rights groups and employees who wanted birth control access sued employers that refused to comply, and a federal court upheld the EEOC’s opinion. And religious groups are not exempt. DePaul University, the largest Roman Catholic university in America, added birth control coverage to its plans after receiving an EEOC complaint several years ago.

“We have used [the EEOC ruling] many times in negotiating with various employers,” says Judy Waxman, the vice president for health and reproductive rights at the National Women’s Law Center. “It has been in active use all this time. [President Obama’s] policy is only new in the sense that it covers employers with less than 15 employees and with no copay for the individual. The basic rule has been in place since 2000.”

Besides the federal rule, 28 states require all insurance plans to cover contraceptives. Nine of them have no conscience clause, and four have “narrow” exceptions, similar to the one in the rules the White House just released.

3. Health insurance is really your money, not your employer’s

“In an employer-based system, like the one the Affordable Care Act reinforces, you pay for your insurance through wages that your employers withholds and dumps into a health insurance fund on your behalf. Either way, though, it’s really your money that’s paying for your health insurance, not your company’s. The only objection that ought to matter is yours.”

One possible compromise then would be something similar to laws in Hawaii and New York. There, if a woman works for an objecting religious institution, she can get that coverage straight from the insurer at the same price.

What will happen now?

Republican House Speaker John Boehner has promised the rule “won’t stand” and Republicans might try to pass a bill repealing the coverage requirement. However, the administration seems to be standing firm on this issue. White House press secretary Jay Carney says President Obama is sensitive to the concerns of religious institutions (and may work with them on a compromise similar to the Hawaii law), but won’t back down from its insistence that all women have equal access:

“We’re not trying to win an argument here. We’re trying to implement a policy that will affect millions of women.”

UPDATE: Well that was fast. As we were posting this, the White House announced a revision of the contraceptive rules, similar to the Hawaiian law we mentioned above:

“Today, we’ve reached a decision on how to move forward. Under the rule, women will still have access to free preventive care that includes contraceptive services -– no matter where they work. So that core principle remains. But if a woman’s employer is a charity or a hospital that has a religious objection to providing contraceptive services as part of their health plan, the insurance company -– not the hospital, not the charity -– will be required to reach out and offer the woman contraceptive care free of charge, without co-pays and without hassles.

The result will be that religious organizations won’t have to pay for these services, and no religious institution will have to provide these services directly. Let me repeat: These employers will not have to pay for, or provide, contraceptive services. But women who work at these institutions will have access to free contraceptive services, just like other women, and they’ll no longer have to pay hundreds of dollars a year that could go towards paying the rent or buying groceries.”

Previous post: How to avoid getting gouged by hospital bills