Warning: Use of undefined constant wp_cumulus_widget - assumed 'wp_cumulus_widget' (this will throw an Error in a future version of PHP) in /home/customer/www/whatifpost.com/public_html/wp-content/plugins/wp-cumulus/wp-cumulus.php on line 375
 Story of the week: A national plan to fight Alzheimer’s
≡ Menu

Story of the week: A national plan to fight Alzheimer’s

Last week, the Obama administration has released an ambitious national plan to prevent Alzheimer’s disease by 2025, while improving the treatment of today’s Alzheimer’s patients. As a first step towards better Alzheimer’s care, the Department of Health and Human Services launched the website alzheimers.gov, a “one-stop shop” for patients and their families, with information on diagnosing Alzheimer’s, treatment options, and support for caregivers.

It’s the result of a bill passed unanimously by both the House and Senate calling for a national plan to combat Alzheimer’s. Unfortunately, while everyone in Congress says they want to make fighting the disease a priority, one party’s proposed budget could make life much harder for Alzheimer’s patients and their families.

About 5.3 million Americans currently suffer from Alzheimer’s, a number that’s expected to more than double by 2050. Most Alzheimer’s care is paid for by Medicare and Medicaid, at a cost of $170 billion annually. By 2050, the cost of Alzheimer’s care will grow to over $800 billion each year– more than our entire military budget.

To deal with this rapidly growing problem, the National Alzheimer’s Project Act was introduced before Congress in February 2010 and passed in December of that year. The Act created an office within the Department of Health and Human services that would, for the first time, develop a plan to combat Alzheimer’s disease with the same intensity as the fights against AIDS and cancer.

The New York Times talked to some of the bill’s cosponsors shortly before it passed:

“If you go to war, you have planning, planning, planning,” said Representative Christopher H. Smith, Republican of New Jersey, who co-sponsored the bill. “Well, this is a war on a dreaded disease. We need to bring all the disparate elements together for the greatest possible result.”

While the act itself does not authorize more money, one of the recommendations of the national plan “is likely to be for an increase in research money for Alzheimer’s,” said another co-sponsor of the bill, Senator Susan Collins, Republican of Maine.

“We spend one penny on research for every dollar the federal government spends on care for patients with Alzheimer’s,” she said. “That just doesn’t make sense. We really need to step up the investment.”

The National Alzheimer’s plan released by the Obama administration does just that– devoting $130 million over the next two years towards Alzheimer’s-related research by the National Institutes of Health (NIH). It’s a drop in the bucket compared to what we spend to combat diseases like cancer, but it’s still a 25% increase in federal money for Alzheimer’s research.

Reuters reports on two studies that will receive immediate funding under the new plan: 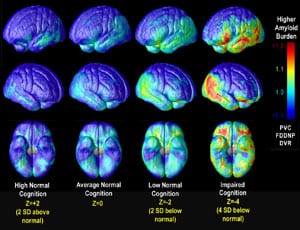 Among the immediate actions will be funding for a study involving an antibody drug that attacks amyloid — a protein thought to be a cause of Alzheimer’s — in an international study of people who are genetically predisposed to develop the disease early.

The second will test the use of an insulin nasal spray to restore memory in patients with Alzheimer’s.

An earlier, small study of the latter approach by Suzanne Craft of the University of Washington published last year showed memory improvements in people with mild to moderate Alzheimer’s or a pre-Alzheimer’s condition called amnestic mild cognitive impairment.

The plan also calls for an additional $26 million to go towards caregiver support and public awareness of the disease. Kaiser Health News describes some of these initiatives:

Chief among those is a government website, alzheimers.gov, also launched Tuesday[…] It features information on Alzheimer’s diagnosis, caregiver support, insurance coverage and clinical trials for new treatments. A radio, TV and print campaign will promote the site beginning this summer and encourage families to plan ahead for the care of their loved ones.

The site will also serve as a resource for health care providers, featuring up-to-date information on how to diagnose and treat Alzheimer’s. Sebelius noted that the health law requires Medicare providers to check patients for cognitive impairment during annual wellness visits, but it will be increasingly important for all providers to have guidelines for Alzheimer’s diagnosis and to look for signs of illness prior to age 65.

The online resources will complement several on-the-ground initiatives. Grants are being awarded this summer to educational centers that work with geriatricians, nurses and others to develop new curricula and training programs. Sebelius said that the administration’s goal is to “improve the care, immediately, that people with the disease receive.”

Funding for the plan remains an issue though. Effective immediately, $50 million will be transfered from this year’s NIH budget to Alzheimer’s-related research, like the two studies mentioned in the Reuters article. But the remaining $80 million for research, and much of the $26 million for care and awareness, were requested in President Obama’s 2013 budget, which has yet to be passed. 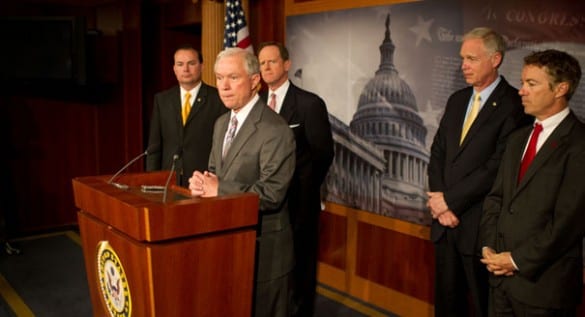 Last Wednesday, the Senate held five meaningless budget votes, in what Politico calls “the latest chapter in Washington’s dysfunctional spending wars.” In an attempt to embarrass the President, Republicans introduced a proposal supposedly based on Obama’s budget blueprint, but with no actual policy details included, that was defeated 99-0. Four actual Republican budget proposals also failed in lopsided votes.

So it’s looking like Congress won’t pass any budget this year, which is actually fine– last year’s bipartisan debt deal already set spending levels for the rest of this year. The bigger problem– at least for Alzheimer’s funding– is what happens if Congress doesn’t reach an agreement on deficit reduction.

You might remember that the debt deal included a “trigger”: if Congress fails to enact its own deficit reduction bill by December 23, 2011, it will trigger an automatic 7.8% spending cut on all domestic programs. A report by the advocacy group United for Medical Research says 33,000 NIH jobs would be lost as a result. It seems unlikely that the NIH would be able to increase funding for Alzheimer’s research if these cuts take effect.

Although if Republicans get their way, Alzheimer’s research and treatment could still be in trouble. For one thing, the House budget, authored by Paul Ryan, includes what the White House’s Office of Management and Budget acting director Jeff Zients calls a “magic asterisk— or in more technical parlance an ‘allowance’” for $897 billion in unspecified cuts. House Republicans refuse to say what would be cut, so Zients applies the cut evenly across the budget, and finds that:

Investments in science, medical research, space, and technology would be cut by more than $100 billion over the next decade. The number of new grants  from NIH for promising research projects would shrink by more than 1,600 in 2014 and by over 16,000 over a decade, potentially curtailing or slowing research to fight Alzheimer’s disease, cancer, and AIDS.

Even if Republicans chose to spare health research grants, there’s still the matter of their massive cuts to Medicaid. Medicare doesn’t cover long-term care, so many people with Alzheimer’s rely on Medicaid to pay for nursing homes or home care workers. Paul Ryan’s budget proposal would cut Medicaid spending by $810 billion over the next ten years (to get a sense of how big that cut is, total Medicaid spending in 2011 was $400 billion).

It’s hard to say how states will make up this shortfall, but it’s likely that they’ll be forced to scale back coverage for long term care. While low income seniors and people with disabilities make up only 25% of Medicaid beneficiaries, they account for over two-thirds of all Medicaid spending.

It’s great that the two parties could come together to say they wanted to fight Alzheimer’s disease. But when Republican politicians talk about cutting discretionary spending and Medicaid to pay for tax cuts for the wealthy, they’re making that fight much more difficult.