Warning: Use of undefined constant wp_cumulus_widget - assumed 'wp_cumulus_widget' (this will throw an Error in a future version of PHP) in /home/customer/www/whatifpost.com/public_html/wp-content/plugins/wp-cumulus/wp-cumulus.php on line 375
 Stephen Colbert explains the Medicaid expansion
≡ Menu

Our favorite conservative pundit breaks it down:

Now folks, Obamacare raises eligibility for Medicaid to 133% of the poverty line, allowing it to cover 30 million more Americans by 2022. 30 million medical moochers. To put that in perspective, if you laid them all end to end, they would stretch to Canada… which is where they should move if they want free health care.

And folks, I tell ya, here is Obama’s trap. The feds are picking up 100% of the cost of each state’s Medicaid expansion until 2017. But then, over the next four years, the percentage the fed pays plunges all the way down… to 90%.

By then, your state is hooked like a diabetic jonesing for his insulin fix. Oh, they love it. Get help, junkies!

He then compares Obama’s Medicaid plan to one state’s current system for providing coverage to the poor: twice a year Tennessee opens a state hotline and sends an application for health coverage to the first 2500 people who call. Stephen loves this concept, saying, “It finally adds some suspense to that old, boring question, “Will I see tomorrow?”

State residents who have high medical bills but would not normally qualify for Medicaid, the government health care program for the poor, can call a state phone line and request an application. But the window is tight — the line shuts down after 2,500 calls, typically within an hour — and the demand is so high that it is difficult to get through […]

“It’s like the Oklahoma land rush for an hour,” said Russell Overby, a lawyer with the Legal Aid Society in Nashville. “We encourage people to use multiple phones and to dial and dial and dial.”

The phone line opened at 6 p.m. on Thursday for the first time in six months. At 5:58, Ida Gordon of Nashville picked up her cordless phone and started dialing. Ms. Gordon, 63, had qualified for TennCare until her grandson, who had been in her custody, graduated from high school last spring. Now she is uninsured, with crippling arthritis and a few recent trips to the emergency room haunting her.

“I don’t ask for that much,” Ms. Gordon said as she got her first busy signal, hanging up and fruitlessly trying again, and then again. “I just want some insurance.”

Meanwhile, as the Washington Post’s Ezra Klein points out, the Republicans’ proposed budget would make things even harder for poor people in states like Tennessee, by repealing Obamacare and block-granting Medicaid:

This is where Republicans stop being polite and start getting real. The first three policies on [the Republicans’] list could, depending on the details, help increase insurance coverage. This policy just kicks millions of poor people off health-care insurance. […]

Block-granting changes Medicaid in two ways. First, rather than being a federal-state partnership, states run the entire program themselves, and the federal role is limited to reduced to handing states a pre-determined amount of money each year. The idea here is that freed from federal meddling about who needs to be eligible and what needs to be covered, states will unleash their innovation machines and develop better, cheaper ways to run Medicaid. This is the part Republicans like to talk about.

But it’s the second change that really matters. Right now, Medicaid’s funding is decided by how many people need it and how much health care they use. The Republican block granting proposals tie it to a formula that grows more slowly than health-care costs. The result is the block granting program in the Ryan budget, for instance, would cut Medicaid by more than $800 billion over the next decade, and assuming no dramatic change in health-care costs, that will mean 20 million people lose their coverage. 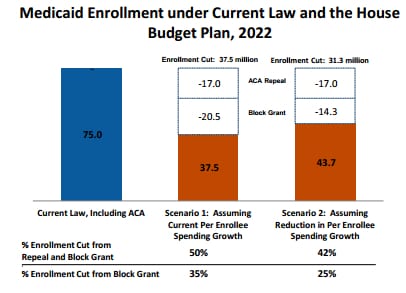 Make no mistake: This policy saves a lot of money. But it saves that money by taking health care away from poor people. There is no way to cut $800 billion from Medicaid without hurting the people who rely on it.

If you’re wondering why Republicans seem so eager to repeal Obamacare and enact policies that would kick millions of people off of Medicaid, Stephen might have an answer:

“House Republicans have done their part.  They have voted to repeal Obamacare 39 times. One more, and they get free health care for life. Just kidding, they get that now.”

Next post: Some big employers are trying to avoid providing health benefits under Obamacare- can they get away with it?