Warning: Use of undefined constant wp_cumulus_widget - assumed 'wp_cumulus_widget' (this will throw an Error in a future version of PHP) in /home/customer/www/whatifpost.com/public_html/wp-content/plugins/wp-cumulus/wp-cumulus.php on line 375
 Some New Rules for Talking About Health Reform
≡ Menu

Some New Rules for Talking About Health Reform 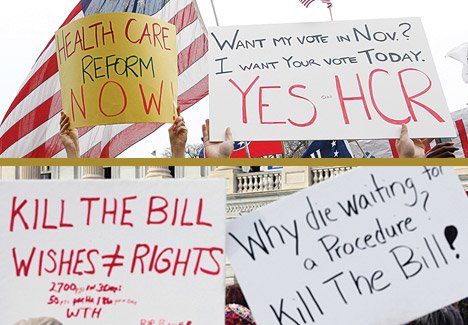 It’s hard to have a productive debate about health reform, when the same misinformation is being repeated over and over. How about a list of rules to guide the conversation?

The Pulitzer Prize winning, nonpartisan website Politifact chose this as its Lie of the Year, because:

Now, as we’ve written before, more government involvement in health care could actually be a good thing– and a recent study backs that up. But a health reform law which will INCREASE the number of Americans with private insurance is far from a government takeover.

Rule #2: No complaining about the Affordable Care Act until you can offer a better alternative.

Look, we support the new law, and we could still spend hours talking about all the things we think are wrong with it or that might not work.

Any health care plan is going to have some popular parts and some tough parts. In the Affordable Care Act there’s plenty of popular stuff:

The list goes on. But there are some tough parts, that are necessary for the popular things to work:

Republicans have been quick to criticize the unpopular parts of the Affordable Care Act, but they’ve also said that they don’t want to return to the old status quo either. “Repeal and replace” has been their mantra. The question is, “Replace with what?” After nearly two years of debating health care reform, Republicans still haven’t offered an alternative plan.

The problem they have is that “replace” is easier said than done. Republicans are finding that any plan they offer is going to have its own tough parts– possibly worse coverage for far fewer people– that the public might like even less than the individual mandate. Still, if Republicans are serious about “repealing and replacing,” then the American people deserve to hear their alternative.

As Ezra Klein put it, in an excellent column in the Washington Post:

It’s put-up-or-shut-up time for Republicans. They managed to make it through the health-care debate without offering serious solutions of their own, and – perhaps more impressive – through the election by promising to tell us their solutions after they’d won. But the jig is up. They need a health-care plan – and quickly.

Rule #3: No citing polls that the American people are against “Obamacare” UNTIL:

Opponents keep trying to say that Americans oppose the new health law, but a look at the polling shows a different story.

The nonpartisan Kaiser Family Foundation tracks attitudes towards health reform with a monthly poll asking people if they view the new law “favorably” or “unfavorably.” What they’ve found is a divided public– there’s been slight variation from month to month, but neither side has received more than 50% support, and there’s no clear trend: 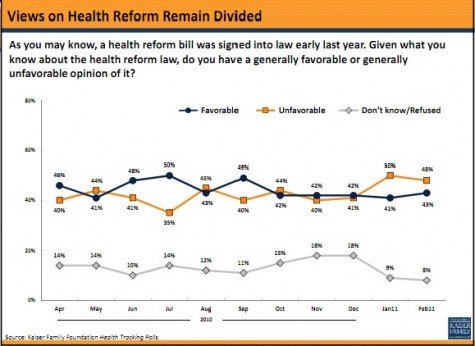 The public is also divided on what to do next for health reform. In January, 50% of the public said they viewed the law unfavorably– the highest percentage that ever responded unfavorably. But when KFF asked what should happen next, keeping or even expanding the new law got more votes than repealing it: 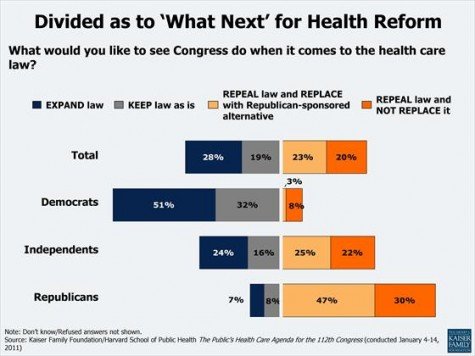 But even more important than whether or not the public supports the Affordable Care Act– most people still don’t know what’s in it. Kaiser Foundation did another survey asking people whether they thought a series of provisions were included in the new law:

Five items (ie. subsidies for low- and-moderate-income families, tax credits to businesses that provide health insurance) are in the measure and five items (ie. the aforementioned “death panels,” coverage for illegal immigrants) are not.

Kaiser found that a quarter of respondents got seven out of 10 answers right, but less than one percent responded to all 10 questions correctly. Overall, 65 percent got five or more answers right.

On the other hand, fully a third scored zero to four, with two percent failing to get a single question right.

Along party lines, Democrats, who largely favor the law, received the highest scores. Fully 32 percent of Democrats got seven to 10 answers right.  Only 18 percent of Republicans answered seven to 10 questions correctly.

And here’s the thing– if you tell people what’s in the new law, even people who said they want to repeal it want to keep most of the specific provisions:

But it’s easy to see why the public is confused. There’s a lot of misinformation out there. Which brings us to the next rule…

Rule #4: Stop using the phrases “job killing” and “budget busting” until you can back that up with actual facts.

We looked into the claim that health reform is “job-killing” in an earlier post, and were unsurprised to discover that it’s false.  The CBO estimates that the labor supply will shrink slightly, as some people might choose to leave their jobs or retire early, because they won’t have to wait until they turn 65 to get decent health coverage. Voluntarily choosing not to work is clearly different from losing your job, but opponents intentionally blur the distinction  with their “job killing” catch phrase.

Same deal with budget busting. The CBO estimates that the Affordable Care Act will reduce the deficit by $230 billion over the next ten years(and more after that). Republicans have complained about the CBO’s math, but the Washington Post’s Ezra Klein thoroughly rebuts each of their major points here.

[The nonpartisan website Factcheck.org has more on these false job-killing and budget-busting claims.]

These rules are just a start. If you have your own ideas that would make the discussion about health reform more constructive, we’d love to hear them. Leave your rules in the comments.