Warning: Use of undefined constant wp_cumulus_widget - assumed 'wp_cumulus_widget' (this will throw an Error in a future version of PHP) in /home/customer/www/whatifpost.com/public_html/wp-content/plugins/wp-cumulus/wp-cumulus.php on line 375
 Serious question: why are anti-abortion activists targeting Planned Parenthood?
≡ Menu

In response to a series of undercover videos taken by anti-abortion activists posing as medical researchers, Republicans in Congress quickly pushed for a vote to strip Planned Parenthood of federal funding. The vote failed in the Senate, but as the Washington Post reports, the fight is far from over:

Defunding Planned Parenthood is now a centerpiece of the Republican agenda going into the summer congressional recess, and some hard-liners have said they are willing to force a government shutdown in October if federal support for the group is not curtailed.

Since clearly the issue isn’t going away anytime soon, here’s a serious question for Congressional Republicans and other anti-abortion activists: what is it from the videos that disturbs you about Planned Parenthood?

Is it the fact that Planned Parenthood is making aborted fetal tissue available to researchers? That’s perfectly legal, thanks to legislation that members of both parties– including some who are now spearheading the movement to defund Planned Parenthood– have supported; and most religious leaders, ethicists, and most of the American public consider it moral, regardless of their stance on abortion. Is it that the organization seems to be selling fetal body parts for a profit? The unedited videos actually show the opposite.

Or is it simply that Planned Parenthood provides abortions? Because, even if you’re opposed to that aspect of their work, the majority of the services they provide– and the only family planning services for which they receive federal funding– are meant to reduce unintended pregnancies that end in abortion.

1. Research on fetal tissue from abortions is legal– and has bipartisan support

In 1988, a panel of medical, religious, legal, and ethical experts appointed by the Reagan administration to advise the National Institutes of Health concluded in a 19-0 vote that it is morally acceptable to use fetal tissue from abortions in scientific research.

As Alta Charo, a professor of law and bioethics at the University of Wisconsin told The Atlantic, “They went through all of the arguments, like ‘Does it make you complicit and evil if you take advantage of what had been a legally aborted fetus and you think that abortion was evil?’ And the answer was, ‘Well no, because we have transplants of organs of homicide victims all the time. So even if you call it a homicide, we take advantage of it.”

Since then, members of both parties have supported the use of aborted fetal tissue in medical research. The website ThinkProgress outlines how even some of the senators spearheading the current movement to defund Planned Parenthood in response to the videos have, in the past, voted to legalize fetal tissue research:

In 1993, members of Congress on both sides of the aisle voted to legalize fetal tissue research, even in cases when the samples were obtained from legal abortion procedures, when they approved the National Institutes of Health Revitalization Act.

Spurred by pressure from groups looking for cures for degenerative diseases, that legislation lifted a previous ban on using fetal tissue in scientific research put in place during the Reagan administration. McConnell voted in favor — along with several other staunchly pro-life Republican lawmakers, like John McCain, Orrin Hatch, Fred Upton, and Lamar Smith.

In addition to the National Institutes of Health Revitalization Act, the Senate had several other opportunities to vote on the issue of fetal tissue donation during the 1990s. Each time, a bipartisan majority indicated support for the practice. In 1992, for instance, most Republicans — including McConnell — voted against a proposal to limit fetal tissue research to samples procured from miscarriages and ectopic pregnancies. In 1997, the Senate voted down an amendment to the Udall Parkinson’s Research Act that would have prohibited funding for research on aborted fetal tissue.

Fetal tissue has a long history in medical research— the polio (which saves an estimated 550,000 lives every year), chickenpox, rubella, and shingles vaccines were all developed using fetal tissue, and it’s currently used in research on neurological diseases, like Alzheimer’s, ALS and Parkinson’s. Two thirds of Americans believe this research is morally acceptable.

McConnell says that the issue current issue isn’t the research itself, but Planned Parenthood’s apparent trafficking of fetal body parts in the video. Which brings us to point two…

2. The videos DO NOT show Planned Parenthood selling baby parts

As the Vox video notes, selling fetuses or fetal tissue from abortions for a profit is illegal, but federal law allows women who have abortions to donate the fetal tissue for research. Abortion providers can charge researchers a small fee to cover the costs of storing and shipping the tissue. In the unedited videos, it’s clear that it’s these fees being discussed, and the Planned Parenthood staff members repeatedly state that they’re not selling the fetuses for a profit.

Anti-abortion groups say that the prices discussed in the video are much more than it costs to store and transport fetal tissue, so the organization is making money off these transfers. The website FactCheck.org looked into this claim and found it bogus:

Four experts in the field of human tissue procurement told us the price range discussed in the video — $30 to $100 per patient — represents a reasonable fee. “There’s no way there’s a profit at that price,” said Sherilyn J. Sawyer, the director of Harvard University and Brigham and Women’s Hospital’s biorepository.

3. Defunding Planned Parenthood could increase the number of abortions 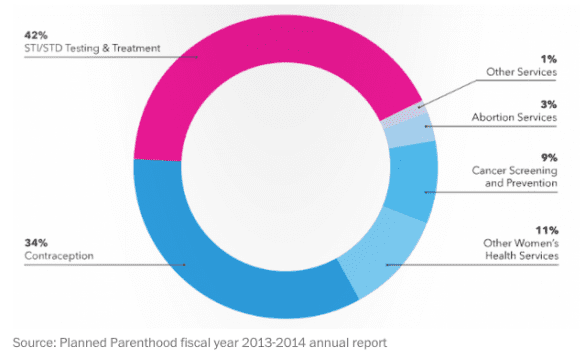 Statistics provided by Planned Parenthood show that just 3% of the services it provides are abortions, and while the same woman might use multiple services, only 10% of its 3 million annual clients receive an abortion. In Louisiana, where governor Bobby Jindal announced he was cutting off state funding to Planned Parenthood following the video controversy, the organization’s two clinics in the state do not provide abortions.

The Hyde amendment (a federal law which, you may remember, featured prominently in Congressional debates leading up to the passage of Obamacare) says that federal funds cannot be used on abortions. Planned Parenthood’s federal funding comes from two sources: the Title X Family Planning Program and Medicaid. Both pay for the organization to provide contraception, cancer screening, and STD testing to low income women.

According to the Guttmacher Institute, a think tank that does research on reproductive health, in 2013 Title X funding (of which Planned Parenthood is the largest recipient) prevents 1 million unintended pregnancies annually, about 345,000 of which would have ended in abortion. We don’t have data on how many unintended pregnancies and abortions are avoided thanks to Medicaid funding, but since Medicaid covers the same services as Title X for women who qualify, and the largest source of Planned Parenthood’s federal funding is Medicaid, it’s safe to say that this funding also means many fewer abortions every year.

Anti-abortion advocates say that the government could simply give Planned Parenthood’s share of that money to other organizations that don’t also provide abortion. However, the Congressional Budget Office says that if Planned Parenthood were defunded, “Most of the Medicaid services that would have been obtained from Planned Parenthood Federation of America would instead be obtained from other health clinics and medical practitioners—but not all of them.” The CBO expects an increase in unintended pregnancies, at least some of which presumably will end in abortion.

As the Guttmacher Institute told msnbc, community health centers are unlikely to fill the gap because, “Planned Parenthood health centers offer a broader range of contraceptive methods, are more likely to offer same-day appointments and have shorter wait times for women to get into care than any other type of provider.” Researchers at George Washington University looked at what happened in five Texas counties after the state cut off funding to Planned Parenthood by kicking the organization out of its Women’s Health Program, and found that other clinics would “need to expand their capacity by two- to five-fold, in order to absorb the patients now being served by Planned Parenthood,” but there was “no evidence” that other providers would be able to handle the very large caseload increases, particularly in poorer, less urban areas where there are few alternatives. And as msnbc reports, “According to the state’s own numbers, the first two years of its multi-pronged attempt to make sure Planned Parenthood got no public funding in the state resulted in 9% fewer women being helped. That’s 18,796 women who didn’t get access to contraceptive counseling and prescriptions, pelvic exams, pap smears and testing for sexually-transmitted infections.” A study published in the American Journal of Public Health says that the reduction in service was even greater, it found that family planning organizations served 54% fewer clients after the cuts.

Meanwhile, it’s hard to see how defunding would lead Planned Parenthood itself to perform fewer abortions since, again, that service is paid for by fees and foundation money, and never by the federal government.

As Janell Ross, a reporter for the Washington Post put it:

This year, when unwanted pregnancy and abortion rates fell, those opposed to abortion and in favor of a range of policies that have made abortions more difficult to obtain sought to take credit. But the most apolitical public health experts agree that critical combination — access to care and contraception — should take most of the credit.

In other words, anti-abortion activists spent two years setting up a video sting operation (which came away with nothing, save some Planned Parenthood employees speaking perhaps too cavalierly about its legal fetal tissue donation program), in an effort to take away funding that experts agree reduces the number of abortions. It’s a strange strategy.

Next post: The three most (well, really only) interesting healthcare moments in the Republican debate

Previous post: The 7 biggest problems with our healthcare system that Obamacare didn’t fix (and ideas for how it still might)