Warning: Use of undefined constant wp_cumulus_widget - assumed 'wp_cumulus_widget' (this will throw an Error in a future version of PHP) in /home/customer/www/whatifpost.com/public_html/wp-content/plugins/wp-cumulus/wp-cumulus.php on line 375
 Republicans are suing the President over Obamacare– but is it a case they actually want to win?
≡ Menu

Republicans are suing the President over Obamacare– but is it a case they actually want to win? 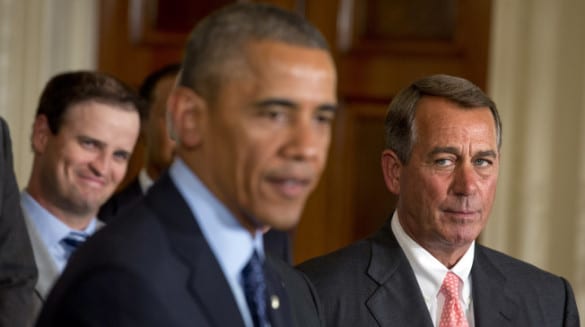 We’ve been talking a lot about the Supreme Court’s decision to hear yet another Obamacare case, but that wasn’t the only big legal news in November. Last month, House Republicans finally filed a lawsuit against the Obama administration over how the law has been implemented.

We say “finally” because House Speaker John Boehner announced that Republicans would be suing the president over, well… something back in June, and picked Obamacare’s employer mandate as a target a couple weeks later. However, since then House Republicans had struggled to find a lawyer who would represent them.

The lawsuit, which was filed immediately after President Obama announced executive action on immigration, seems as though it was put together solely to get newspapers to run headlines with the words “Congress sues” and “Obamacare” in them. It’ll be a tough case for Republicans to win, but more importantly, we’re not sure they even want to win it.

There are three questions the court will have to answer:

1. Does Congress even have the standing to sue?

In order to sue someone, you have be able to show “standing”– in other words, that you’ve suffered some specific injury– otherwise courts won’t even look at the case. Pretty much every other time members of Congress have tried to sue a president, the cases were dismissed because they didn’t have the standing to sue.

Conservatives argue that this time is different because, instead of individual members filing the lawsuit, for the first time ever the House as an institution voted to authorize it (with the vote split along party lines). They also say that the House should be granted standing because no other plaintiff would be able to demonstrate harm, so there’s no other way, short of impeachment, to get the President to enforce the mandate.

However, most legal experts are incredibly skeptical. At the website Vox, Sarah Kliff rounds up some of their opinions:

“I see this every day now, being covered as if it’s real, as if it’s somehow not a joke,” Yale law professor Akhil Reed Amar says. “But can they name a single successful lawsuit in American history that is of close precedent to what they are proposing?” If not, he says, “At a certain point, I get to call Birther-ism. I get to call bullshit.” And Harvard law professor Jack Goldsmith wrote, “The lawsuit will almost certainly fail, and should fail, for lack of congressional standing.”

Some staunch conservatives have been downright scornful of Boehner’s effort. Former Bush Department of Justice prosecutor Andrew McCarthy, who just wrote a book making the case for impeaching Obama, wrote that Boehner’s arguments — and, by extension, Rivkin and Foley’s — were “either untrue or abject nonsense.” He added that “judges are not there to resolve power disputes between the political branches.”

2. Did the White House break the law by delaying the employer mandate?

The employer mandate provision of the ACA says that large employers (those with more than 50 full-time employees) have to offer health coverage or pay a penalty. It was originally scheduled to take effect in 2014, but the White House has postponed it twice— now for most employers it won’t start until 2016.

To comply with the mandate, employers will have to report a ton of detailed information about health insurance for each of their workers; the Obama administration has said the delays would (1) give it time to simplify the reporting process and (2) give businesses more time to set up systems for gathering this info.

House Republicans counter that the White House simply doesn’t want to go forward with one of the law’s more unpopular provisions. Boehner said in a press release, “In 2013, the president changed the health care law without a vote of Congress, effectively creating his own law by literally waiving the employer mandate and the penalties for failing to comply with it.”

So did the White House really “create its own law” here? As we wrote back in February, the answer is probably not:

While the President can’t simply refuse to set up a law– the constitution says the executive branch “shall take care that the laws be faithfully executed”– he does get leeway in how it’s done. The 1946 Administrative Procedures Act gives the executive branch some discretion in establishing regulations (like the employer mandate), although courts can step in if a required action has been “unreasonably delayed.” However, writes Simon Lazarus, senior counsel at the Constitutional Accountability Center:

“Courts have found delays to be unreasonable only in rare cases where, unlike this one, inaction had lasted for several years, and the recalcitrant agency could offer neither a persuasive excuse nor a credible end to its dithering.”

Since then, the nonpartisan Congressional Research Services looked into the employer mandate delay; its report found that the White House did indeed follow the law. As Lazarus writes, “Having been asked whether the Obama administration had crossed all its t’s and dotted its i’s, the CRS’ answer was unequivocal: yes it had.”

3. Did Congress appropriate money for the cost-sharing subsidies?

While Boehner had talked about suing over the employer mandate for months, this second part of the lawsuit was a surprise.

Hopefully by now you’ve heard that under Obamacare there are subsidies available to help pay the cost of premiums for many Americans. Fewer people are aware that there’s an additional subsidy for those making less than 250% of the poverty line– if you purchase a silver plan, this second subsidy reduces your cost-sharing (that’s anything you pay besides premiums: copays, coinsurance, and deductibles). So say the deductible on a silver plan is normally $2500– the cost-sharing subsidy, which the government sends directly to insurers, could bring it down to $500, or possibly even less if your income is low enough. (For a more detailed explanation check out our post on “The OTHER Obamacare subsidy that hardly anyone knows about.”)

The lawsuit filed by House Republicans says that the White House doesn’t have the authority to pay out these cost-sharing subsidies. Obamacare created the subsidy program, but under a law called the Antideficiency Act, for the subsidies to actually be paid out, Congress also has to specify what account the money is coming from through an appropriations bill. And according to The New York Times:

President Obama requested the money as part of the budget he sent Congress in April 2013, but Congress did not act on the request. Seeing the issue as an urgent priority, the administration began making the payments early this year, using money from a separate account established for tax refunds and tax credits.

Congress provided an open-ended appropriation for tax refunds more than 30 years ago, and in the health care law it said the money could be used for tax credits that subsidize insurance premiums.

But in their lawsuit, House Republicans say, “Congress has not, and never has, appropriated any funds” for the cost-sharing reductions.

It appears that House Republicans may have a case– the Congressional Research Service also thinks there’s been no appropriation for this other subsidy. But again, for a judge to even hear the case, they’ll will have to show they’ve been harmed, which will be tricky. According to University of Michigan law professor Nicholas Bagley:

“The typical rule is that where the U.S. Treasury is making payments to someone else that you think they ought not be making, that’s not an injury to you.”

Also, do House Republicans want to win this case?

We see why Republicans want to sue the President– it gives them another tool to block laws if they can’t get their way politically, and it plays into their narrative that the president is acting like an “emperor” by taking executive action. But let’s take a step back to look at what the suit would actually accomplish if House Republicans get their way.

First, with the employer mandate, the GOP is suing to get the White House to implement the one part of the law that most experts think should be scrapped. As we’ve pointed out before, it’s a huge administrative hassle, it could lead to employers cutting hours, and workers might still be left without adequate coverage. And even Republicans themselves don’t like it– we expect the Senate to vote on changing or repealing the employer mandate when the GOP takes control of the chamber in January.

The cost-sharing subsidies seem like an even dumber target. The House might have a legitimate case here, but if it does go forward, more people will be paying attention. Do Republicans really want to take ownership of a lawsuit that, if successful, would drastically increase out-of-pocket costs for millions of working Americans?

Next post: How common are police shootings? No one knows because no one’s counting.

Previous post: The “Denny’s Grand Slam option” and other ways to fix Obamacare if the Supreme Court rules against it