Warning: Use of undefined constant wp_cumulus_widget - assumed 'wp_cumulus_widget' (this will throw an Error in a future version of PHP) in /home/customer/www/whatifpost.com/public_html/wp-content/plugins/wp-cumulus/wp-cumulus.php on line 375
 Proposed rules from the White House could trigger more insurance cancellations. And that’s probably a good thing.
≡ Menu 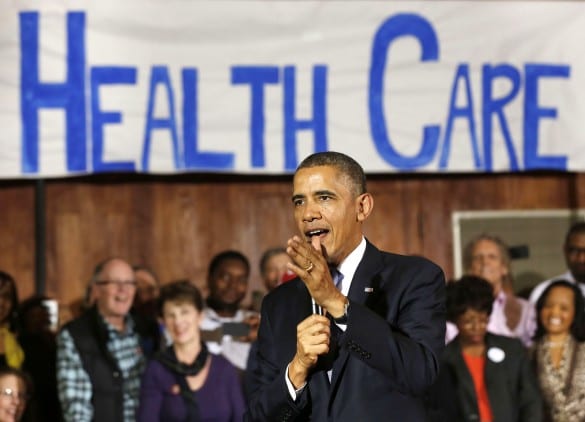 This is weird. On this site, we often cite reporting from Ezra Klein and Sarah Kliff to explain why the latest media hype about Obamacare is wrong or misleading. Today though, we saw a story from them that’s a bit misleading.

Recently the Obama administration proposed new regulations targeting a type of health coverage known as “fixed benefit” or “indemnity” insurance. Unlike traditional comprehensive coverage, which pays the entire cost of medical services (minus your deductible, copay, or coinsurance), these fixed benefit plans pay out a set sum of money if you get sick. The proposed regulations would prevent insurers from selling them as stand-alone coverage– instead people would only be able to buy these plans to supplement more comprehensive coverage.

Vox, the news site that Klein launched recently, ran the story with the headline, “If you like your health plan, you might lose it. Again” and one of those Obama-looking-sad pictures that seem to top any article containing bad news for the White House. At the end of the article there are quotes from insurance companies and regulators about how for certain at-risk popuations, like undocumented immigrants and poor people who live in states that aren’t expanding Medicaid, these plans may be the only coverage option. Vox editor Ezra Klein tweeted a link to the story, saying “I don’t understand why the Obama administration is doing this.”

It sounds bad, right? But if you take a closer look at these plans, you find that they’re generally what Consumer reports calls “junk health insurance.” Most people would be better off with no insurance than one of these fixed-benefit plans.

The media tends to focus on how Obamacare deals with the problem of uninsurance, but just as importantly it’s meant to address underinsurance as well. That’s why plans sold on the online marketplaces have to meet certain minimum standards:

Fixed benefit plans are cheaper than plans sold through the Obamacare marketplaces because they don’t have to follow these same rules. Now because of that, they also don’t satisfy the individual mandate, so the people buying these plans are either (1) choosing to pay the penalty, or (2) are exempt from the mandate because they couldn’t get an affordable plan under Obamacare (say, because their income was below too low in a state that didn’t expand Medicaid) but still want something.

The complaint from the insurance companies and state regulators cited in the Vox article is that eliminating fixed-benefit plans will leave the folks who opted out of Obamacare plans with significantly fewer coverage options. But should these plans, which are often sold by companies you’ve never heard of through late-night infomercials, robocalls, even be considered by those without insurance?

Consumer Reports looked into them a few years ago and described them this way:

These plans will reimburse you a set sum, generally low, for medical services, after which you’re on your own, most likely with a load of medical debt if you experience a major health problem. The $450-a-month plan Ted Tenenbaum [59, of Hawaii]  was sold was a typical one: it pays $100 apiece for up to five doctor visits a year, $50 a year for screening tests, and $1,000 a day for up to 30 days in the hospital. A typical hospital stay runs about $1,850 a day, and these plans cover little if any of the associated costs, such as tests, medications, and surgery. Unlike mini-meds, which though stingy function like real insurance policies and charge very low premiums, indemnity plans can cost as much as major medical insurance. […]

So let’s say Ted gets sick, and ends up in the hospital for five days. And let’s assume that he’s not there just hanging out, but they’re actually doing tests, giving, him medication, or doing surgery, so instead of $1,850 per day, the actual cost is $4,293 per day, which according to Vox, is the average daily price of a hospital visit. His plan will cover just $5,000, leaving Ted on the hook for $16,500. If it was something more serious he’d be paying an even greater share of the cost. The only way Ted’s plan would make any kind of financial sense is if he had only paid a few months of premiums, and got sick… but not too sick.

The Consumer Reports article quotes Karen Pollitz, a senior fellow at the nonpartisan Kaiser Family Foundation and an expert on individual insurance, who puts it bluntly:

“Don’t buy fixed benefit plans. You’ll still be uninsured but out a bunch of money.”

Since fixed-benefit plans don’t technically count as health insurance, they aren’t covered by Obamacare’s reforms and were thus left untouched when insurers started canceling non-grandfathered plans. So the White House was left with three options:

By themselves fixed-benefit probably be eliminated. However, as the Vox article notes, some people are using them just to cover high deductibles on more comprehensive plans purchased through Obamacare’s online marketplaces. That could be helpful to some people, and the Obama administration’s proposed rule accommodates exactly this use of fixed-benefit plans.

It might also make sense to allow them as stand-alone plans temporarily– in the example above Ted’s plan might have been helpful in the short-term, like if he was waiting for a job that provided coverage to start in a month or two. The thing to keep in mind though is that there is very little regulation of these plans, which are often sold by companies you’ve never heard of on late-night infomercials, robocalls, and, of course, the internet. Often they have worse benefits than Ted’s plan, so customers could still end up screwed even if they were only available for temporary gaps in coverage.

Really the only reason it doesn’t make sense to issue rules regulating fixed-benefit plans is political: it could trigger fresh accusations of breaking Obama’s “if you like your coverage, you can keep it” promise. But maybe not. The last round of stories and attack ads about Obamacare cancellations featured compelling anecdotes from people who were losing plans that they really did like (although many of them were actually eligible for cheaper, better plans under the new law). It would be a lot harder to find similar stories for fixed-benefit plans (the Vox article for example talked to nobody who actually has one), since most people that have them are getting screwed.

Next post: Nearly half of all Americans live in places with unsafe levels of air pollution. Here’s how the EPA is trying to change that.

Previous post: Tons of good news about Obamacare this week