Warning: Use of undefined constant wp_cumulus_widget - assumed 'wp_cumulus_widget' (this will throw an Error in a future version of PHP) in /home/customer/www/whatifpost.com/public_html/wp-content/plugins/wp-cumulus/wp-cumulus.php on line 375
 Pennsylvania’s governor reverses course on Medicaid… sort of
≡ Menu 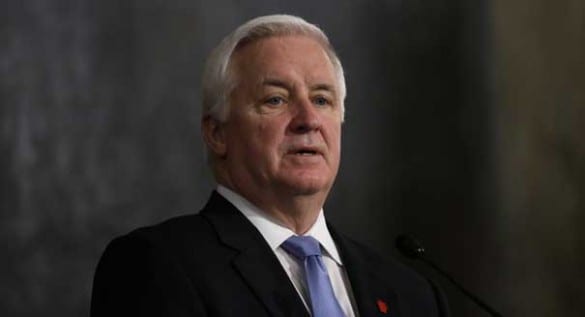 When Pennsylvania Governor Tom Corbett announced back in February that he opposed Medicaid expansion, we really couldn’t understand why. After all, that would leave over 500,000 residents without access to coverage, it would be a missed opportunity to create tens of thousands of jobs, and, for at least the next few years, it would actually cost the state more NOT to expand.

Well, it seems that the Republican governor has finally come around… sort of. On Monday, Corbett released a plan he calls “Healthy Pennsylvania” that he insists is NOT a Medicaid expansion. Instead, he wants to use Obamacare’s expansion money to buy private insurance for those who would have been covered by Medicaid– and he’s demanding major changes to the state’s existing Medicaid program as well.

Here’s a look at what his plan would mean for Pennsylvania.

How the Medicaid expansion was supposed to work

For those making more than 133% of the federal poverty level (the FPL is $11,490 for individuals), Obamacare creates an online marketplace where they can shop for private insurance, and get subsidies to help pay for it. Meanwhile, everyone making less than 133% of the FPL is now eligible for Medicaid… if they live in a state that chooses to expand. In Pennsylvania, 542,000 newly eligible adults would enroll.

Instead of expanding Medicaid, Corbett wants to use that federal funding to pay for private insurance policies that Medicaid-eligible Pennsylvanians would buy on the Obamacare exchange.

There would be a couple exceptions. The “medically frail” could choose to opt out of private coverage and just get traditional Medicaid. (“Medically frail” means having one or more of the following: a disabling mental disorder, chronic substance abuse, a serious/complex medical condition, or a physical, intellectual, or developmental disability.) Also, people who are currently eligible for Medicaid under the old, pre-Obamacare rules would continue to receive traditional Medicaid as well.

Right off the bat, we see two glaring issues. First, if Pennsylvania simply opts into the Medicaid expansion, coverage would start this January 1. Corbett’s privatization plan will take much longer to implement, and likely wouldn’t start until 2015 at the earliest. That means half a million Pennsylvanians will have to go yet another year without coverage, and the state will lose out on billions in federal funding.

An even bigger long-term problem is that private insurance is much more expensive than Medicaid. Estimates vary, ranging anywhere from $850 more per person (according to a 2005 study published in Health Affairs) to $3,000 more (that’s the Congressional Budget Office’s estimate). Multiply those figures by the 542,000 adults expected to receive Medicaid under the expansion, and privatization will cost an extra $460 million to $1.63 billion per year.

Officials in Arkansas– the first state to propose privatizing the expansion— argue that competition on the exchanges will drive private insurance costs down to near-Medicaid levels. Adrianna McIntyre, of the fantastic health policy site Project Millennial doesn’t buy it though, for some pretty good reasons:

I have a hard time with the competition-as-panacea argument; Medicaid managed care doesn’t provide evidence for it—this isn’t managed care, but it’s similar. At any rate, the argument that Medicaid rates must reach private levels seems inconsistent with the […] experience in Massachusetts (whose Medicaid rates are still below private and Medicare rates, even with exchanges that have been operating since 2006).

Corbett’s plan does address one actual problem with the Affordable Care Act– something called “churning.” (That’s the movement of people between the exchanges and Medicaid as a result of changes in income.) Income change can happen a lot to people making less than 200% of the FPL (remember the Medicaid cutoff is 133% of the FPL). One study found that half of people in this group would have experienced a change in eligibility within a year, and one in four would have had at least two eligibility changes.

Churn is a problem because these people might get tired of applying for new coverage every few months– or simply forget– and just drop out. That’s bad news for these individuals (because if they do get sick they‘ll be screwed), and it’s also bad news for the exchanges (people who stop enrolling in coverage would tend to be healthier, and for the exchanges to work, healthy people have to sign up).

According to Corbett, privatization would reduce churn since individuals could sign up for one plan, and if their incomes change they could stay on it– just the price they pay for coverage would change.

Whereas privatization only applies to those who are newly eligible for Medicaid under Obamacare, Corbett has some other demands that would apply to everyone on Medicaid– both those currently enrolled and those who would get private coverage under his expansion alternative.

1. New premiums: People who make between 50% and 133% of the FPL would have to pay a monthly premium for coverage on a sliding scale based on income. He hasn’t say what the scale will look like, but the maximum is $25 for individuals, and $35 for couples. The proposal also says there would be premium reductions for those who engage in wellness programs or engage in job search activities.

Numerous studies have shown that for people with low incomes, even seemingly small premiums and enrollment fees are a barrier to obtaining and maintaining coverage. Says Shannon Mace Heller, a Philadelphia-based public health attorney:

2. Eliminate copays: This section is a little vague, but apparently Corbett wants to eliminate all copays, with the exception of a $10 co-pay for inappropriate use of ER services. This is… actually not a bad idea.

3. Job search requirements: To get Medicaid if you’re unemployed, you’d have to show that you’re looking for work, with “limited exceptions” (which aren’t spelled out in the plan summary). The wording of this one is also a little confusing, so we’re a little unclear on whether the job search requirement is actually mandatory, or just a way to reduce your premium.

If it is mandatory, Joan Alker, director of Georgetown University’s Center for Children and Families, said it would be an unprecedented change in the safety net structure, adding, “I don’t believe people’s health care should be conditioned upon their job search requirements.”

4. “Benefit design reforms”: Corbett’s plan proposes “simplifying the existing 14 adult benefit packages into two commercial-like alternative benefit packages,” and “aligning Medicaid benefits with the health care benefits available in the commercial market.” Again, no specifics here– according to the plan summary, the benefits will be based on a “comprehensive analysis of existing Medicaid services.”

It seems strange that Corbett proposes eliminating Medicaid benefits and benefit packages before doing the analysis. Also, Corbett claims that Pennsylvania’s Medicaid costs are high because its benefits are too generous, but in fact, Pennsylvania’s Medicaid program has many more seniors and disabled people than other states—  two groups that cost much more to cover (75% of all PA Medicaid spending goes to these groups). 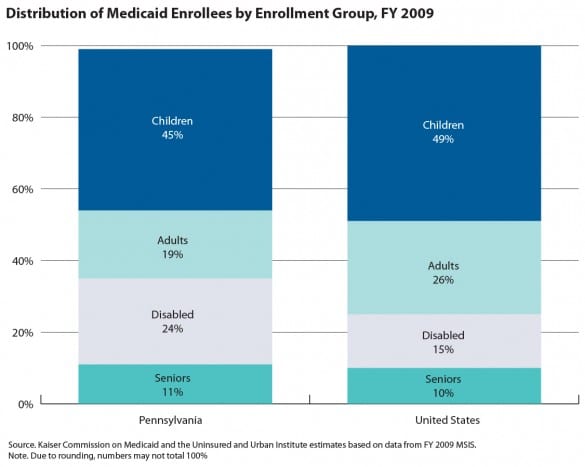 The TLDR summary: is this plan a good idea?

We have to say that it’s definitely better than doing nothing– this way at least low income adults will have access to coverage… eventually.

But compared to simply opting into Obamacare’s Medicaid expansion, Corbett’s plan falls short. It will likely cost hundreds of millions of dollars more each year, cut back benefits for existing Medicaid beneficiaries, and leave half a million Pennsylvanians without any coverage for at least another year.

The one advantage of Corbett’s plan is it might address churning, but by adding premiums and work requirements, his plan has it’s own equally problematic churning problem. The income of poor people often jumps around significantly– adding healthcare to the list of utilities that might get shut off if they don’t have the cash that month is not a good thing.

There’s a certain political logic to Corbett’s plan. It is an election year, and it could be a way to fend off tea party challengers while trying to appeal to moderate voters. In response, Matthew Major, an opinion editor at Chamberburg’s newspaper, The Public Opinion, put it the best we’ve seen:

There’s nothing inherently wrong with attempting to craft a custom deal that reflects Pennsylvania’s needs. But the goal should be covering the most people for the least amount of money, and not creating policy contortions aimed at ideological and political cover to a governor whose opposition to one of the most important laws of the land has painted him into a corner.

It would be a real shame if Corbett’s ideology undermined or watered down a crucial break for a great number of Pennsylvanians.

Next post: What the “actuarial value” of an insurance plan means (and why you should ignore it)