Warning: Use of undefined constant wp_cumulus_widget - assumed 'wp_cumulus_widget' (this will throw an Error in a future version of PHP) in /home/customer/www/whatifpost.com/public_html/wp-content/plugins/wp-cumulus/wp-cumulus.php on line 375
 Obamacare open enrollment has begun– here’s our guide to getting covered (updated for 2016)!
≡ Menu

Obamacare open enrollment has begun– here’s our guide to getting covered (updated for 2016)!

It’s open enrollment time for the Affordable Care Act, which means that now through January 31 anyone who needs coverage can buy a plan. The ACA means that millions more Americans can get affordable coverage, but shopping for health insurance can still be incredibly confusing and stressful. Don’t worry though: to help make the process a little easier, we have a new guide to getting covered under Obamacare for 2016!

Deadlines: Open enrollment lasts for three months– from November 1, 2015 to January 31, 2016. If you want your coverage to start on January 1, you have to enroll by December 15.

Income guidelines: The cutoffs for Medicaid and subsidies to help pay for premiums are both based on the federal poverty level (FPL), which is a little higher this year than it was last year. (For example, last year the FPL for a single adult was $11,670– this year it’s $11,770.)  You can see the new guidelines in this chart: 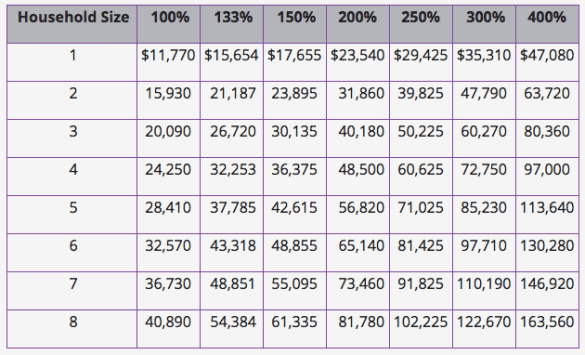 The penalty for not having coverage: For the first couple of years after Obamacare took effect, the individual mandate was phased in slowly, giving people a chance to get used to the new system. This year, though, the individual mandate is in full effect. The penalty for going without coverage in 2016 is $695 per adult (and $347.50 per child), up to a maximum of $2,085 per household; or 2% of your household’s income– whichever is greater. You’d pay that amount on your 2017 taxes.

Why you should NOT just auto-renew your Obamacare plan next year: If you already have coverage through the Obamacare exchanges and don’t do anything, you’ll automatically be enrolled in your current plan. This is a terrible idea for a bunch of reasons. For starters, the details of your plan might have changed– and as this tool from ProPublica illustrates (it’s from 2015, but the principle will be the same this year), sometimes the difference can be dramatic:

But also, just as importantly, even if your plan doesn’t change, what you pay may be totally different. Most people are getting a federal subsidy to help pay for coverage, which is calculated based on three things: (1) the sticker price of your plan, (2) your income, and (3) the price of a “benchmark” silver plan. Even if your plan’s sticker price and your income will be exactly the same in 2016 (and chances are they won’t), if the price of that benchmark plan changed, then what you pay for your premium could be very different this year.

If you don’t log back onto the Obamacare marketplace to ask for a redetermination of your subsidy, it will automatically apply the subsidy you got last year– even though it’s probably wrong– and if it’s too large, you’ll have to pay some of it back when you file your 2016 taxes. Also, you may find that another plan is much cheaper this year– so it pays to shop around.

The basics of getting coverage

Next post: Economists love Obamacare’s “Cadillac” tax, but is it really a good idea?

Previous post: Drug companies have been jacking up the price of generics for years– here’s how Congress could stop them