Obamacare is clearly working – so why is public opinion on it still split? 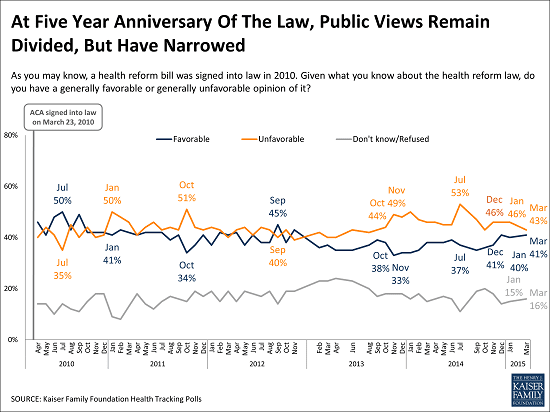 On Friday, we looked at how the Affordable Care Act is doing on its fifth birthday, and if nothing else, it’s clear that Obamacare has proven it’s critics wrong. Before the exchanges launched, opponents claimed that no one would sign up, that premiums would skyrocket, that it would wreck the economy. Instead, nearly 12 million people have purchased coverage through the exchanges so far, premiums were lower than expected in 2014 and rose by just 2% in 2015 (before Obamacare, the norm was around 10%) and last year was the biggest year of job creation in more than a decade.

And yet… despite all this good news, as the chart above shows, public opinion on the ACA is still split, with slightly more people reporting an unfavorable view than a favorable one. So what gives? We have a few theories.

Much of the good news is still relatively new. We heard a year ago that over 7 million people signed up for coverage under Obamacare, but opponents of the law claimed most of those people would have had coverage without it. They were wrong, as Gallup tracking polls over the past year have shown a steady decline in the uninsurance rate, but other than those quarterly polls and Charles Gaba’s painstaking work compiling enrollment numbers there’s been very little data. We’re only just beginning to see how Obamacare really has expanded access to coverage. For example, that report from HHS showing that 16.4 million previously uninsured Americans are now covered (based on the Gallup surveys) came out just last week. It may just take a while for public opinion to catch up with these new facts.

People still don’t know what Obamacare does. The website Vox recently commissioned a poll asking what people know about the law. The thing that most people were aware of is also the law’s most unpopular provision: 75% of respondents know there’s a mandate to buy insurance. Just 64% were aware that pre-existing conditions no longer exist and only slightly more than half (54%) know that there’s financial help to buy a plan.

Those are just the key parts– awareness of other aspects of the law is even worse. For example, many people think the law is getting more expensive; only 5% of respondents were aware that budget estimates for the ACA have consistently fallen since it became law.

Navigating the new system can be confusing. Steven Brill pretty much nails it in this this Time magazine piece, reporting that while Obamacare has been a godsend for many Americans, the process of buying that coverage is often difficult:

Obamacare doesn’t change things much for most Americans. With such fierce debate about the ACA over the past five years, people tend to forget that it is not a complete overhaul of our existing health system. That was intentional. There wasn’t enough support in Congress for a more radical shift (like single-payer), so the law was designed to get health coverage to the uninsured without disturbing health coverage for everyone else.

For the most part, that’s exactly what’s happened. President Obama rightly took a lot of flack for his “If you like your plan, you can keep it” comments; but what got lost in all the controversy is that only 2.6 million people got cancelation letters– that’s less than 1% of the country (and after the White House said that states could grant extensions to noncompliant plans, only 400,000 actually had their coverage canceled). Meanwhile, a similarly small number of employers who were offering really crappy coverage or who realized that their employees could get a better deal on the exchanges dropped their plans.

But for the vast majority of the 260 million people who had coverage before Obamacare, the law only made smaller tweaks (like eliminating annual/lifetime limits, adding preventive services, etc.)– otherwise things have continued pretty much as before.

The problem is that not disturbing America’s healthcare system too much also meant not addressing many of its problems. As the AP pointed out in its own look at Obamacare’s fifth anniversary, the average annual premium for an employer-based plan for a single adult has gone up nearly $1,000, from $5,049 in 2010 to $6,025 in 2014. The cost of family coverage increased $3,000. Employers have also been shifting more and more costs onto employees. In Pennsylvania, where we live, 37% of adults reported an increase in out-of-pocket costs. Nationally, the average employee share of premiums has gone up and the average annual deductible for single coverage was $1,217 in 2014, up from $917 in 2010.

The ACA mostly isn’t responsible for these increases (although we can’t count the number of times we’ve seen employers blame Obamacare for unpopular changes that weren’t required by anything in the law), but it is getting blamed for not addressing them.

Perhaps that’s unfair, but either way it highlights an important point. On it’s fifth anniversary, Obamacare really has proven to be a huge improvement over the old system, but there’s still work to do.

Next post: It’s getting harder and harder for conservatives to claim that Obamacare isn’t working