Warning: Use of undefined constant wp_cumulus_widget - assumed 'wp_cumulus_widget' (this will throw an Error in a future version of PHP) in /home/customer/www/whatifpost.com/public_html/wp-content/plugins/wp-cumulus/wp-cumulus.php on line 375
 Non-story of the Week: Misleading study claims that “Obamacare” increases the deficit
≡ Menu

Non-story of the Week: Misleading study claims that “Obamacare” increases the deficit 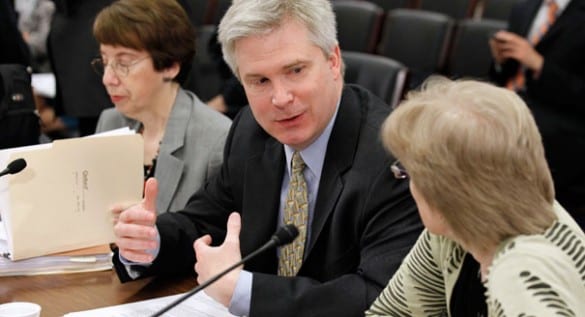 If you were following the news this week, you might have seen this story:

President Obama’s landmark health-care initiative, long touted as a means to control costs, will actually add more than $340 billion to the nation’s budget woes over the next decade, according to a new study by a Republican member of the board that oversees Medicare financing.

Sounds bad, right? Well it turns out that every part of that sentence is misleading.

For starters, while the author, Charles Blahous, is a trustee of Medicare (the President traditionally appoints one member of each party), the study wasn’t published by Medicare, or any other government agency. It was published by the Mercatus Center, a conservative think tank funded by the Koch family. But more importantly, it’s just as wrong as past claims that “Obamacare” will increase the deficit. Here’s why.

In order to tell whether a given bill will increase or decrease the deficit, the nonpartisan Congressional Budget Office (CBO) first figures out a baseline deficit– in other words, what the deficit would be over the next ten years if we follow all the policies Congress has already enacted. Then it looks at how much the bill would add to, or subtract from, that baseline.

Now, Balhous’ study doesn’t argue that the CBO’s estimate of the cost of health reform is wrong– which is what you’d think when you read headlines like: “Study: Health care law to add billions to budget.” Instead, Balhous is saying that the way the CBO calculates its baseline is wrong.

The Current CBO Baseline: Technically Medicare is separate from the rest of the federal budget– the Medicare tax that’s taken out of our paychecks goes into a special Medicare trust fund. Now, the law says that Medicare can’t spend more than what’s in that trust fund. But the law also says that Congress can move money into the trust fund pretty much whenever. So when the CBO figures out its baseline, it basically ignores the fact that there’s a separate fund, assuming that if it starts to run out of money, Congress will simply add however much it needs to keep paying out the same benefits. The money that Congress puts in is usually borrowed, which is why we have a deficit.

This new baseline is kind of a trick to make health reform look bad. The Affordable Care Act pays for itself, in part, by cutting $500 billion in Medicare spending (mostly by reducing payments to private insurers in Medicare Advantage and to certain types of health care providers). Using Balhous’s baseline, these cuts don’t count, because it assumes Medicare was already going to cut that spending automatically. Take away that $500 billion in savings, and suddenly “Obamacare” adds $340 billion to the deficit.

But if you’re going to apply Blahous’s baseline to health reform, you have to apply it to everything else Congress does. No one wants to do that, because it’s a really weird way of looking at the federal budget. The Washington Post’s Ezra Klein explains:

When you hear people talk about our future deficits, what they’re saying is that the trust funds that support disability insurance, Medicare, Social Security, and highway spending will run out, but the programs will keep spending. That’s where the deficits come from. Blahous argues that these programs will never spend a dollar more than is in their trust funds. And when you assume that, all our deficit problems go away: 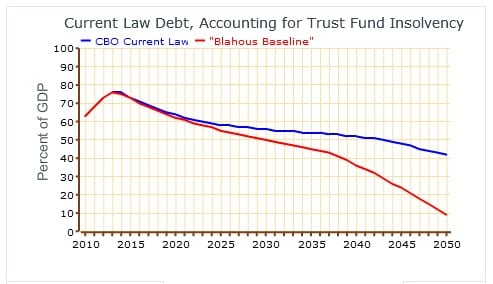 This graph compares our debt (as a percentage of GDP) using the two baselines. As you can see from the red line, Blahous's method assumes that the deficit somehow magically disappears on its own.

In other words, sure, you can use Balhous’ new baseline if you want to make Obamacare look bad. But in order to do that you also have to say, “There is no deficit problem,” which of course no one believes.

Really, all the talk about the trust fund is just smoke and mirrors. The study didn’t uncover any new information– it simply changed the yardstick we measure bills against in a way that specifically disadvantages the Affordable Care Act. The real question we should be asking: If we add up all the new spending, taxes, and cuts to old spending in the new law, does it save money? And the answer is clearly yes.

Next post: Health reform in the Supreme Court: Why one word could determine the fate of health reform