Warning: Use of undefined constant wp_cumulus_widget - assumed 'wp_cumulus_widget' (this will throw an Error in a future version of PHP) in /home/customer/www/whatifpost.com/public_html/wp-content/plugins/wp-cumulus/wp-cumulus.php on line 375
 No, Obamacare is not the largest tax increase ever
≡ Menu

No, Obamacare is not the largest tax increase ever

Obamacare isn't even close to the "largest tax increase in the history of the world." But if you still want to see the largest of something, here's the world's biggest piñata.

The Supreme Court ruling that the individual mandate is a tax may have saved health reform, but it’s opened a new line of attack for opponents of the law. Republicans in Congress are claiming that it’s the largest tax increase in U.S. history, while Rush Limbaugh went a step further calling it “nothing more than the largest tax increase in the history of the world.” As you might suspect given Limbaugh’s involvement, these claims are both totally false.

Yes, the Affordable Care Act does raise some taxes some individuals, but mainly on the wealthy, those with “Cadillac” insurance plans, and indoor tanners:

There are also new taxes on pharmaceutical companies, medical device makers, and insurance companies. But there are also tax cuts– in the form of tax credits to help lower-income individuals and families as well as some very small businesses pay for insurance.

All together, by 2019, when the entire law is in place, the government will see increased revenues of $104 billion per year, or about 0.49% of our GDP. How does this stack up with major tax increases since World War II? The Affordable Care Act isn’t even close to the largest: 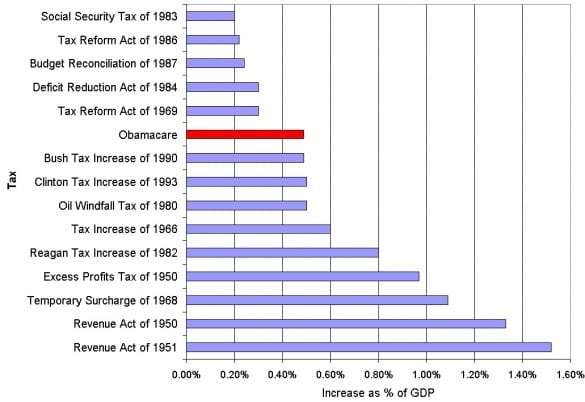 Oh and the mandate, the part that Republicans are specifically calling a massive tax increase since the Court ruling… is actually pretty tiny. You wouldn’t really be able to see it on the chart above, so here’s another one that’s zoomed in some: 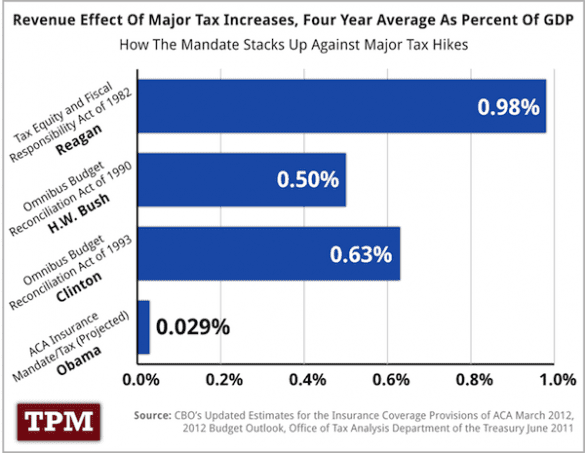 To justify calling it the largest tax increase in U.S. history, some Republicans are claiming that since the law says you have to have insurance or pay a penalty, then you have to include the cost of health insurance as a tax. One writer at Forbes (who should probably know better) says:

The median U.S. family income is about $50,000.  Family health coverage can easily run $20,000 a year — and rising quickly.  In that scenario, the coverage mandate is essentially a 40 percent tax on that family, which is now required by law to ensure that every family member has qualifying coverage.

For starters, most people already have insurance, usually through an employer or through Medicare– in other words the mandate doesn’t apply to 94% of the US population. It is absolutely crazy to claim that the requirement to buy insurance is a $20,000 tax increase on people who already have insurance.

There are only about 26.3 million Americans who are currently uninsured who would have to choose between buying insurance or paying the penalty. Of that group, over 8 million will be eligible for Medicaid or CHIP, at basically no cost, and 11 million more will qualify for subsidies to help pay for insurance.

So let’s take the family making $50,000 in the example from Forbes. Assuming they’re not already covered, the cost of their insurance wouldn’t be $20,000– it would actually be a little less than $3,400 annually. If they don’t want to pay that, they can simply go with the $695 penalty.

They could even choose to ignore the penalty, with little consequence: unlike most other taxes, the IRS will not have the power to charge you criminally or seize your assets if you refuse to pay.

Most families will choose the insurance coverage though, because few people are uninsured by choice– they either can’t afford it or insurers won;t sell to them because they have a pre-existing condition. “Obamacare” addresses both problems.

In the end, the mandate should only count as a tax increase on the few who choose to pay it rather than buy insurance (the CBO estimates it will be about 4 million people, or a little more than 1% of the population). It’s only expected to raise about $4 billion per year, the equivalent of a rounding error in some bills. Calling it the “largest tax increase in US history” is dead wrong, and calling it the largest increase in the history of the world… well, as the Pulitzer-winning fact checking site Politifact puts it:

“Limbaugh’s inflated rhetoric takes a wrong claim and puts it into the realm of the ridiculous. We rate it Pants on Fire.”

Next post: Is the mandate a tax or a penalty? It doesn’t matter

Previous post: The best coverage of the Supreme Court decision