Warning: Use of undefined constant wp_cumulus_widget - assumed 'wp_cumulus_widget' (this will throw an Error in a future version of PHP) in /home/customer/www/whatifpost.com/public_html/wp-content/plugins/wp-cumulus/wp-cumulus.php on line 375
 No, Mitt Romney can’t pay for his defense spending increase by repealing Obamacare
≡ Menu

No, Mitt Romney can’t pay for his defense spending increase by repealing Obamacare 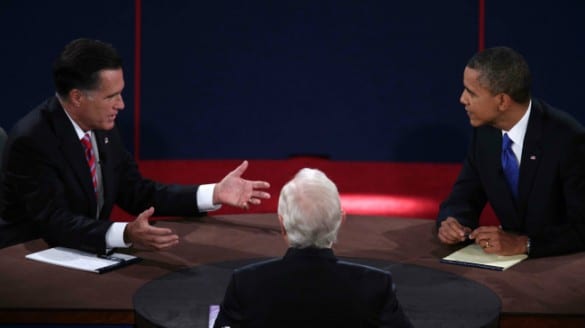 Even though last night’s debate was supposed to focus on foreign policy issues, health care did make a brief appearance. Moderator Bob Scheiffer asked Romney how he would pay for his proposed $2 trillion increase in defense spending without driving the country deep into debt. Here’s Romney’s response:

We do it by getting — by reducing spending in a whole series of programs. By the way, number one I get rid of is “Obamacare.” […] Number two, we take some programs that we are going to keep, like Medicaid, which is a program for the poor. We’re — take that health care program for the poor, and we give it to the states to run because states run these programs more efficiently.

The claim that he’ll save money by repealing “Obamacare” is flat out false. As for Medicaid, it’s not the block grants themselves that will save the federal government money; it’s the massive cut in Medicaid spending that Romney is proposing along with his block grants– a cut that will force millions of people out of the program.

Romney’s first proposal– repealing the Affordable Care Act– would actually increase the deficit by $109 billion over the next ten years. That’s because the new law’s spending to extend health coverage to 32 million Americans (and expand Medicare benefits for seniors) is more than offset by tax revenues and savings in Medicare.

Unlike repealing Obamacare, Romney’s second proposal, block-granting Medicaid does save money… but not because states can run the program better. Romney hopes states can manage Medicaid more efficiently, because either way his plan cuts the federal share of Medicaid funding by over $800 billion.

There are few things states can do to run the program more cheaply though– Medicaid already has very low overhead and pays doctors and hospitals much less than other forms of coverage. Also, most states are already strapped for cash, and will be hesitant to raise taxes to make up for the lost funding. That leaves cutting benefits, cutting people out of the program, or shifting costs onto beneficiaries (who remember, are states’ poorest residents).

Several studies have looked  at how states would respond to these cuts. The Commonwealth Fund found that 10.3 million people would lose coverage as a result of Romney’s block grants. Another report, this one by the Urban Institute, examined a scheme very similar to Romney’s and found that 20 million people could lose Medicaid coverage.

The UI report also modeled what would happen if the block grants did manage to eliminate inefficiencies like Romney claims and somehow held per person Medicaid spending growth to the same rate as the rest of the economy (health care costs historically have grown much more quickly than that). Even then, the report found that 14 million fewer people would have coverage than under the current system, because the funding won’t keep up with population growth. 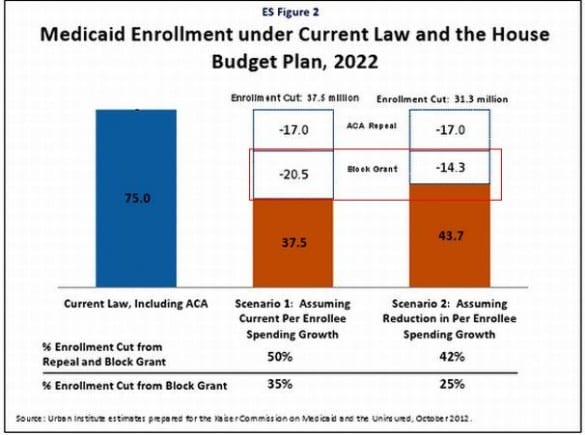 Meanwhile, Romney cites Rhode Island as an example of a state that already has a successful block grant system. However, unlike Romney’s proposal, which drastically cuts Medicaid funding, Rhode Island actually got more federal money when it switched to a block grant. Wonk Room’s Igor Volsky, citing a Center on Budget and Policy Priorities report explains:

Or, as the Incidental Economist’s Aaron Carroll puts it: There’s no magic in block granting.

(For more on Romney’s Medicaid plan, check out our earlier primer on it here.)