Warning: Use of undefined constant wp_cumulus_widget - assumed 'wp_cumulus_widget' (this will throw an Error in a future version of PHP) in /home/customer/www/whatifpost.com/public_html/wp-content/plugins/wp-cumulus/wp-cumulus.php on line 375
 New air pollution rule! How it will effect your health
≡ Menu

New air pollution rule! How it will effect your health 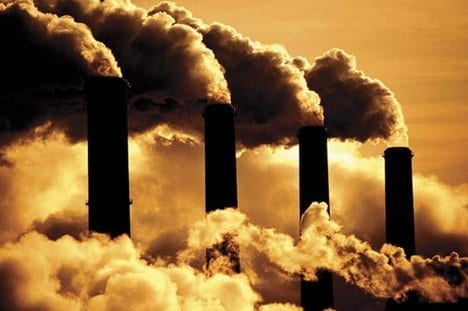 Yesterday, in our look at where the EPA’s new air pollution rules stand, we forgot to mention a new one that slipped under our radar. This rule will help clean up some of the dirtiest coal-fired power plants.  Also, we’ll look at a bill Republicans are trying to pass to undermine the EPA.

What it does: About 23% of the country’s coal-powered electricity comes from old, dirty plants that are about a half century old and aren’t equipped with modern scrubbers. They had effectively been “grandfathered” in by a system that let them trade pollution allowances from newer, cleaner plants. The new rule sets standards that every site must meet, and requires all coal plants to use “Maximum Achievable Control Technology” to clean up their emissions of mercury and other toxic chemicals.

Where it stands now: The rule is due out this week and takes effect in 2015, giving plants three years to clean up their act or shut down.

Cost vs. Health Benefits: The EPA estimates this rule will cost utilities $10.9 billion annually, while providing health benefits worth $100 billion every year. The average consumer will see their electric bill go up just 3.7% or less than $4 per month. It’s a great deal: $10 in benefits for every $1 in cost to industry.

According to the Fiscal Times:

Most of the benefits will come in the form of a sharp reduction in the 13,000 to 17,000 premature deaths that occur annually when elderly Americans are exposed to particulate matter belched from uncontrolled coal plant smokestacks. […]

The clean-up would also sharply reduce mercury and other toxic chemical emission. Those dangerous emissions are associated with as many as 2,675 excess cases a year of mental retardation, according to the EPA, which costs the health care and education systems as much as $3.3 billion a year. […]

Environmentalists also question the claims about lost jobs, since plants that install scrubbers will create thousands of jobs for engineers and construction workers employed to build the facilities. And while some ancient coal-fired plants will undoubtedly be closed, they will in all likelihood be replaced by cleaner natural gas-fired, coal-fired or renewable electricity generation facilities. Manpower to build and operate those new plants  will replace many if not most of the jobs lost at older plants and in the nation’s coal mines, which today employ fewer people than the solar energy industry.

House Republicans have been trying to roll back all of the EPA’s air pollution rules. It hasn’t worked, thanks to a Democratic-controlled Senate and the promise of a veto from President Obama, and so Republicans are now trying to handicap the EPA itself.

What it does: The “Regulations from the Executive in Need of Scrutiny” Act would send any “major rule” that’s estimated to cost the economy more than $100 million, or would have an adverse effect on consumers or individual industries, to Congress for an up-or-down vote. If Congress doesn’t approve the regulation in 70 days, it won’t take effect.

Republicans argue that it would prevent regulatory decisions from being made by “unelected, unaccountable bureaucrats.”  In reality this act would likely usher a lobbying bonanza:

Even after Congress passes major legislation, federal agencies are often tasked to “write” the specific rules that implement the biggest changes. So interest groups routinely spend massive sums of money to persuade federal regulators to make changes or carve-outs, or block rules from being enacted, whether over Wall Street reform, the Affordable Care Act, or the Environmental Protection Agency’s coal ash regulations.

But federal regulators heading up that process don’t have campaign coffers to fill. Shifting the approval of such rules to Congress would, accordingly, shift their lobbying over to elected lawmakers who rely on campaign contributions. So although Republicans argue that the status quo lets “major decisions to be made by unelected, unaccountable bureaucrats,” their alternative accordingly makes more regulations vulnerable to deep-pocketed contributors who shape the electoral cycle.

Where it stands: The bill is basically dead on arrival in the Senate, as it should be.

Previous post: Where are they now?: Air pollution rules edition