Warning: Use of undefined constant wp_cumulus_widget - assumed 'wp_cumulus_widget' (this will throw an Error in a future version of PHP) in /home/customer/www/whatifpost.com/public_html/wp-content/plugins/wp-cumulus/wp-cumulus.php on line 375
 More thoughts on the Oregon Medicaid study
≡ Menu 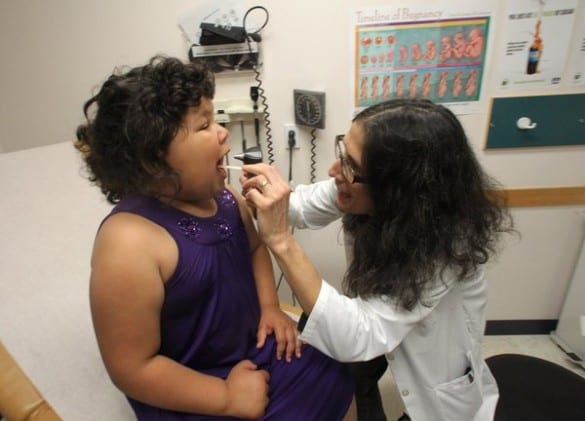 As we explained yesterday, the recent Oregon Medicaid study was simply too small to tell if Medicaid helped control high blood pressure, cholesterol, and diabetes (although it did show Medicaid improved mental health and nearly eliminated catastrophic medical costs). Still, some opponents say that Medicaid patients should have seen huge improvements, and continue to argue that the study “proves” Medicaid had no effect on physical health. Yet if we were to accept the argument that “inconclusive” is the same as “has no effect,” conservatives would have some explaining to do. Because if the study did show that Medicaid doesn’t improve our health, then neither does private insurance.

Remember that Medicaid is simply a way to pay for healthcare, and it works basically the same as private insurance– really the only significant difference between the two is that Medicaid pays doctors and hospitals much less. Conservatives, like Scott Gottlieb, a fellow at the American Enterprise Institute, say that this is why Medicaid causes worse health outcomes:

So why do Medicaid patients fare so badly? Payment to providers has been reduced to literally pennies on each dollar of customary charges because of sequential rounds of indiscriminate rate cuts […] As a result, doctors often cap how many Medicaid patients they’ll see in their practices. Meanwhile, patients can’t get timely access to routine and specialized medical care.

In a Forbes blog post titled “Why Medicaid is a Humanitarian Catastrophe,” Avik Roy, a healthcare adviser to Mitt Romney’s presidential campaign, claims the same thing:

Medicaid reimbursement rates are so low that hospitals, on average, lose money on every Medicaid patient they treat. As a result, most doctors refuse to see Medicaid patients, forcing the poor to get care through hospital emergency rooms. (Emergency rooms are required by federal law to treat all comers.) These patients can’t get access to routine checkups and preventive care, because doctors won’t see them. That, in turn, leads to poorer health outcomes.

Yet what the study shows (with statistically significant confidence) is that Medicaid patients got much more preventive care than people without insurance. The Medicaid group had on average three more doctor visits per year, 70% had a regular place of care (compared to 46% in the non-Medicaid group), 42% had a cholesterol screening (compared to 27%), and had double the rates of mammograms and PSA testing for adults over 50.

As one of the study’s authors, Amy Finkelstein of the Massachusetts Institute of Technology and winner of the John Bates Clark medal (the second most prestigious prize in economics) told the New York Times:

“There was this view that Medicaid coverage would not do much for the low-income uninsured, either because they had access to charity care or because Medicaid is not good insurance. This rejects that notion entirely.”

Ok, so if people on Medicaid are getting care, and getting care that makes sense, and didn’t see huge improvements on certain health indicators, what’s the explanation? There are a few possibilities.

#1. The problem isn’t Medicaid– it’s our healthcare system in general

We’ve written a lot about how more care does not necessarily equal better care, so we’ll let Harvard medical professor and health policy researcher Ashish Jha handle it this time:

In the Oregon study, we see that many people, especially in the high risk groups, have poorly controlled blood pressure, diabetes, hypercholesterolemia, and depression. Yes, Medicaid seemed to help a little, but not enough.  People with Medicaid had, on average, 7.2 office visits over the past 12 months. That’s more than once every 2 months. Yet, their blood pressure, cholesterol, and blood sugars barely budged. This is not an access problem.  This is not about “Medicaid is bad” or “insurance is bad”. This is about what happened (or did not happen) in those visits – namely, evidence-based care that we know improves health.

#2. It takes a while to adjust to having insurance

One of the winners of the Oregon lottery writes about her own experience:

Stepping back into healthcare was like hopping on a merry-go-round. The doctor wanted to do test after test to come up with baselines for me, and I had a hard time showing up at the lab, I hadn’t been going to the doctor to find out new things about what was wrong with me. A huge part of living without insurance is not thinking about your high blood pressure damaging your kidneys. It takes a while to change that. It took me 6 months to change my level of co-operation with my doctor, and she said I was faster than many. Most people got into the groove about their 2nd physical.

Again, from the woman who got Medicaid through the Oregon lottery:

Diabetes and cholesterol are both food-based diseases. The Oregon Medicaid project enrolled very poor adults, I think the income cutoff was much lower than the SNAP benefit limit. So none of us have access to unlimited fresh fruit and low fat meat. We still eat nothing but carbs for most meals.

The mental health benefits are enormous. Changing how you eat and exercise is hard for everyone, but most people can throw a bit of money at the problem and grease their way. With no money for better food, no money for good shoes to go on walks, no rain gear, no walkman for listening to music as a distraction while walking, change is harder.

Notice that all these shortcomings apply to both Medicaid and private insurance. Medicaid probably did improve cholesterol, blood pressure, and blood sugar somewhat– the study was just too small to know for certain. But if access to health coverage should produce much bigger improvements, then the problem isn’t how we’re covered– it’s an issue with the quality of care we get once we have coverage.

As Aaron Carroll and Austin Frakt write on their Incidental Economist blog:

Health insurance is necessary, but not sufficient to improve health. It’s just the first step. We have never claimed that quality would go up just because of the ACA. Access will improve. We need to do a lot more work to improve quality. And, yes, maybe that will require a change to how Medicaid operates, but will quality improve if more poor people don’t have access to the means to afford care? We don’t see how.

Previous post: What to make of the Oregon Medicaid study