Warning: Use of undefined constant wp_cumulus_widget - assumed 'wp_cumulus_widget' (this will throw an Error in a future version of PHP) in /home/customer/www/whatifpost.com/public_html/wp-content/plugins/wp-cumulus/wp-cumulus.php on line 375
 More on the Stupak Amendment
≡ Menu

More on the Stupak Amendment 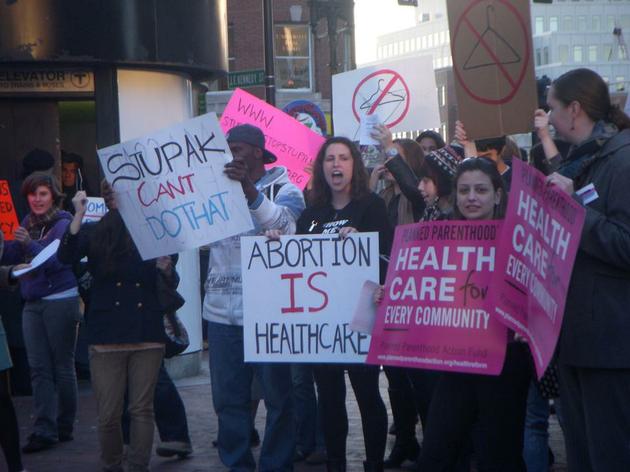 A couple weeks ago, I got into a long debate with a friend over the Stupak Amendment (which we wrote about here).  We both thought that the Stupak amendment was bad news, but we disagreed on how bad the actual effects would be.  Basically, I didn’t think that the Stupak amendment would limit coverage for abortion much more than the bill’s original language.  Even if insurance companies stopped offering coverage for abortions in every basic plan, the amendment states that women could still get coverage for abortion through supplemental insurance plans called “riders.”  The riders might be dumb and insulting and a step backwards for the pro-choice movement, but they would at least provide access to care for women who wanted it.  And I couldn’t see any reason why insurance companies wouldn’t offer these riders.

Anyways, turns out I was wrong.  Super wrong.  Like the kind of wrong where George Washington University releases a fourteen page study proving just how wrong you are.  That kind of wrong.

The key is the way the amendment is worded.  It states that insurance plans can offer supplemental plans covering abortion if:

(1) premiums for such separate supplemental coverage or plan are paid for entirely with funds not authorized or appropriated by this Act;

According to the GWU study, the important part is the second point about administrative costs.  Abortions are usually inexpensive compared to other medical procedures, and relatively few medically necessary abortions are performed each year- so insurance companies should be able to cover them easily.  But because money for administrative costs could not come from outside of the supplemental plan, each insurance company would have to set up a totally separate administrative system to handle abortions– which could be extremely expensive if not totally impossible.

The study focuses on medically necessary abortions, or abortions in which there has been a medical diagnosis that the procedure is needed.  It talks about the difficulty of separating coverage of medically necessary abortions from other health coverage, using the analogy of a car.  It’s easy for car companies to offer different colors for the same model car because it’s not a major structural change.  The insurance equivalent would be adding vision or dental– they don’t have to totally change your plan to offer that coverage.

But supplemental coverage for abortion would be more like changing a specific part of the engine- every piece is interrelated, so you’d have to do some major engineering to remove just one part and still make it work.  Similarly, medically necessary abortions usually involve other major health issues and coverage would require a totally new administrative system– in other words, the insurance companies would have to do some major engineering to make it work.  That work would not be cheap, and it’s not at all clear whether they would have a financial incentive to do it.

To highlight the importance of medically indicated abortions, some women have been stepping forward to tell talk about their own experiences.  Tiffany Campbell, was pregnant with twins in 2006, when an ultrasound revealed a serious complication called Twin-to-twin Transfusion Syndrome (TTS).  A TTS diagnosis means that one twin is getting too much blood, the other too little, and the prognosis for both twins is grim- there is a 60% to 100% mortality rate.  She was told that the best hope for saving the pregnancy was the selective termination of one of the fetuses in the hope that the other would survive.  That’s what she did, and the one baby made it.

If she lost coverage for abortion because of the Stupak amendment, which allows for abortion only when the life of the mother is in danger or in the case of rape or incest, she would not have been able to afford the procedure.  She would have been forced to carry the pregnancy to term and likely lost both babies.

Martha Mendoza, a Pulitzer Prize-winning investigative journalist tells the heart-breaking story of finding out that her unborn baby has died, and then being unable to find a doctor who can do the procedure to remove the dead fetus.  From the article:

I could see my baby’s amazing and perfect spine, a precise, pebbled curl of vertebrae. His little round skull. The curve of his nose. I could even see his small leg floating slowly through my uterus.

My doctor came in a moment later, slid the ultrasound sensor around my growing, round belly and put her hand on my shoulder. “It’s not alive,” she said.

She turned her back to me and started taking notes. I looked at the wall, breathing deeply, trying not to cry.

I can make it through this, I thought. I can handle this.

I didn’t know I was about to become a pariah.

She managed to find a specialist in a neighboring county who could do the procedure, but wasn’t available for almost a week.  In the meantime, her body started trying to expel the fetus in a spontaneous abortion– the least safe option.  She called several medical centers in her area, and all told her not to come in since they didn’t have doctors available who could do the procedure.  Eventually, the abortion was performed on the scheduled day, but by then she was in labor, which again was not the safest option for removing the dead fetus.

Mendoza’s inability to find a doctor to perform the abortion wasn’t insurance related- since the 2003 signing of the “partial birth” abortion ban, very few doctors are trained to do the procedure.  But the effect was the same as not having coverage- the inability to get care for a medically necessary abortion.

We find it more than a little ironic that some of the same people who were most concerned about “government bureaucrats getting between you and your doctor” have introduced an amendment that would effectively do just that for millions of women.

Next post: Does for-profit insurance ever play a positive role in health care?