Warning: Use of undefined constant wp_cumulus_widget - assumed 'wp_cumulus_widget' (this will throw an Error in a future version of PHP) in /home/customer/www/whatifpost.com/public_html/wp-content/plugins/wp-cumulus/wp-cumulus.php on line 375
 Members of Congress will be back in their districts next week. Just sayin’
≡ Menu

Members of Congress will be back in their districts next week. Just sayin’ 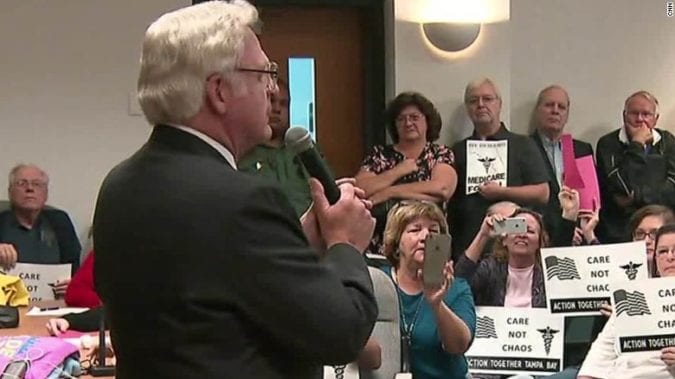 We wanted to share three pieces of related information that might be of interest to anyone who is concerned about possible repeal the Affordable Care Act.

1. A breakdown of who could lose coverage, by Congressional district

Ever since the Affordable Care Act first took effect, Charles Gaba has been tracking how many people have enrolled in health coverage as a result of the law. His website, ACASignups.net, has been cited by everyone from The Washington Post and The New York Times to Fox News and Breitbart as the most accurate source of estimates about the ACA’s coverage expansion

Lately Gaba has been working on a new project: estimating how many people would lose coverage in every Congressional district if Obamacare was repealed without a replacement. To give a sense of what that looks like, here are the figures for Pennsylvania: 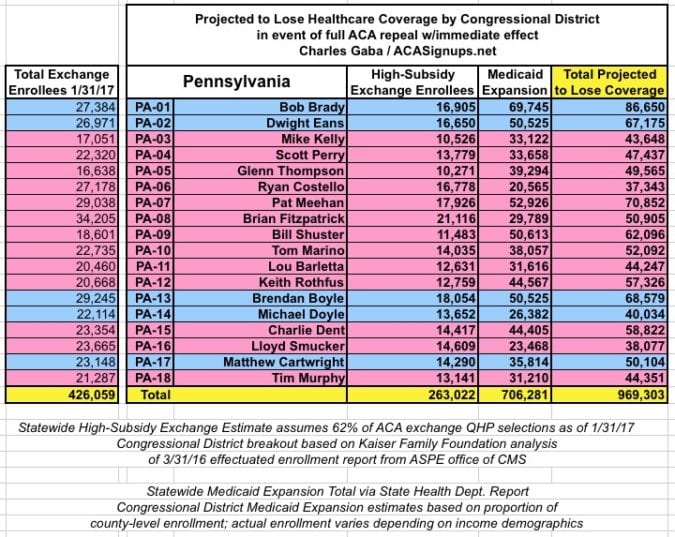 2. Congress will be on recess next week

The recess means that most members of Congress will be back home in their districts, meeting with constituents and holding townhall events. There are a bunch of different ways to find out what your representative will be up to. You can call their office and ask (if you type in your address at the website Call to Action, it will give you the number of their district office). Or you can check out the Townhall Project Google doc, where volunteers have been compiling a list of every Congressional townhall they can find throughout the country.

There’s also the website Resistance Recess, where if you type in your zip code, it will show you not only if your representative is holding a townhall, but, if they’re not, whether constituents have organized their own townhall and invited your rep to attend.

3. Townhall events are a great opportunity to share how you feel about Obamacare

For example, at a townhall held by Rep. Diane Black (R-TN), a 35 year-old French teacher who lives in Cookeville, Tennessee gave one of the best defenses of the ACA we’ve ever seen, saying:

“My name is Jessi Bohon and I’m in your district. It’s from my understanding the ACA mandate requires everybody to have insurance because the healthy people pull up the sick people, right? And as a Christian, my whole philosophy on life is pull up the unfortunate. So the individual mandate, that’s what it does. The healthy people pull up the sick. If we take those people and put them in high-risk insurance pools, they’re costlier and there’s less coverage for them. That’s the way it’s been in the past, and that’s the way it will be again. So we are effectively punishing our sickest people. And I want to know why not, instead of fix what’s wrong with Obamacare, make companies like Aetna that pulled out and lied to their consumers about why they pulled out, and said they pulled out because Obamacare was too expensive, but they really pulled out because of a merger. Why don’t we expand Medicaid and have everybody have insurance?”

Seriously urge everyone to watch this entire question from a woman at GOP #Obamacare townhall in Tennessee: pic.twitter.com/8mBGE1z6Rj

At a townhall held by Rep. Gus Bilirakis (R-FL), residents of Pascoe County got to demonstrate how they felt being lied to about death panels in the ACA:

But the best part of townhalls is that it’s a chance for those whose lives have been saved by the ACA to share their stories with the people who are trying to repeal it:

Hopefully this info helps when you’re making your own plans for the coming week.

Next post: The GOP’s American Health Care Act: the Nickelback of health reform