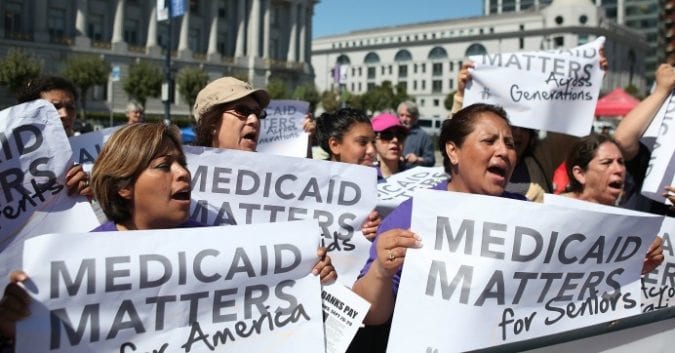 Republicans in Congress weren’t able to repeal the Affordable Care Act last year, but the Trump administration had a Plan B– using executive authority to chip away at the number of people covered under the law. Over the past year, they’ve taken a number of steps to “reform” the law by making it harder for people to get coverage, including stricter verification requirements, shortening the open enrollment period, and cutting funding for Navigators (outreach groups that help people sign up for coverage).

Those steps mostly targeted people signing up for private insurance coverage, but in 2018 the Trump administration has apparently set its sights on Medicaid as well. Earlier this year, Trump’s Medicaid director announced that for the first time in the history of the program, states will be allowed to introduce work requirements for Medicaid beneficiaries. It has already accepted work requirement plans from two states– Kentucky and Indiana— and ten other states have announced plans to follow suit.

On the surface, these work requirement programs sound reasonable. Republicans argue that if a person can work and simply chooses not to, why should the hard-earned tax dollars from people who do work go to pay for that person’s benefits? Asking them to contribute to society by working is not only fair, it could also improve their health, since being employed is also associated with better health outcomes. Or so the argument goes.

In reality, most Medicaid recipients who are able to work are already working. Meanwhile, not only will work requirements like fail to encourage employment among the “able-bodied,” these requirements will force many people who can’t work– due to illness or disability– out of the program.

Most Medicaid recipients who can work are working

Before we look at how these work requirements could affect Medicaid recipients, let’s take a look at how many people on Medicaid really are able to work, but choosing not to. The Kaiser Family Foundation is considered the “gold standard” of health policy polling and analysis– they found that among non-elderly adults with Medicaid coverage, nearly 80% are in a family where at least one adult works, and 60% are working themselves. Of the people who aren’t working, most are either disabled, in school, or not working due to caregiving: 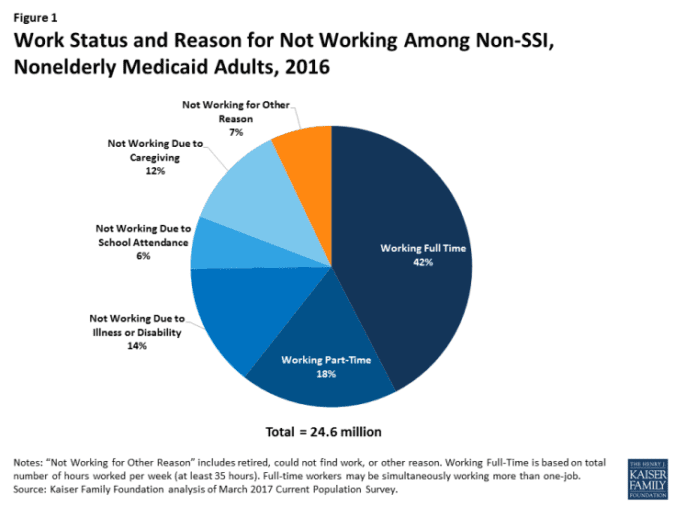 Kaiser also asked adults on Medicaid who weren’t working why they were unemployed– in addition to the reasons listed above (illness/disability, acting as a caregiver, going to school), some were retired and others were looking but couldn’t find work. That left just 3% who could be defined as “able-bodied” and choosing not to work: 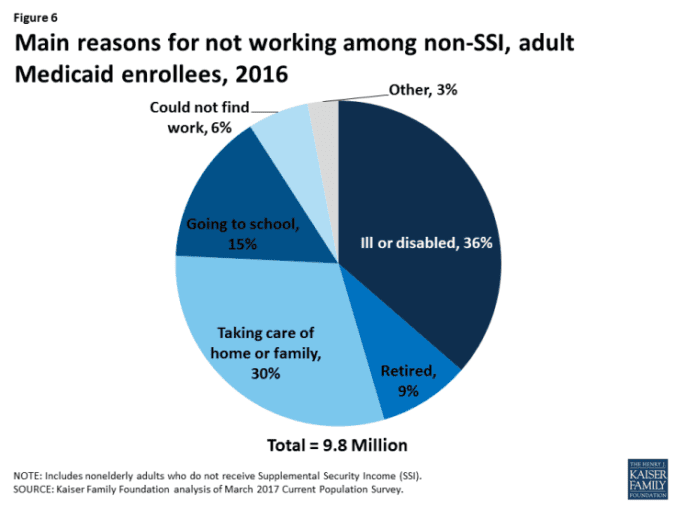 Still though, even though just a tiny fraction of Medicaid recipients would be the targets of a work requirement, you could make the case that it would be worth it if work requirements improved the lives of those “able-bodied” unemployed– or at least encouraged them to find employment– without harming the folks who can’t work. Unfortunately neither is true…

In a letter providing guidance to states who want to implement work requirements in Medicaid, Trump’s Medicaid director cited the health benefits of work promotion:

CMS recognizes that a broad range of social, economic, and behavioral factors can have a major impact on an individual’s health and wellness, and a growing body of evidence suggests that targeting certain health determinants, including productive work and community engagement, may improve health outcomes. For example, higher earnings are positively correlated with longer lifespan. One comprehensive review of existing studies found strong evidence that unemployment is generally harmful to health, including higher mortality; poorer general health; poorer mental health; and higher medical consultation and hospital admission rates.

First, we should note that the Trump administration has to make the case for the health benefits of work requirements– whether true or not– to prevent courts from blocking them. The administration is using its authority under section 1115 of the Social Security Act, a provision that lets it grant waivers to states who want to experiment in making changes to their Medicaid programs, just so long as those experiments will potentially “assist in promoting [Medicaid’s] objectives.” Medicaid was never meant to be an employment program, so in the letter Trump’s Medicaid director is reminding states that work requirements “should be designed to promote better mental, physical, and emotional health in furtherance of Medicaid program objectives.”

Still, it’s true that employment is often associated with better physical and mental health. However, there is little evidence that work requirements in social welfare programs lead to increased employment in the long term. The Temporary Assistance for Needy Families program that came out of welfare reform in the 1990s has work requirements similar to what the Trump administration is encouraging states to implement in their Medicaid programs. Margot Sanger-Katz of the New York Times Upshot blog summarizes the evidence on the effect of TANF’s work requirements:

The general conclusion is that the work requirement increased the number of welfare beneficiaries who worked in the short term but had little impact on their long-term employment prospects or their long-term earnings. While work requirements appear to have nudged some beneficiaries who were close to the poverty line above it, they do not appear to have meaningfully improved the long-term financial circumstances of eligible people, who were predominantly parents of young children with low levels of education.

“In reality, it is difficult to get eligible able-bodied adults without dependent children to enroll in Medicaid. After all, they do not need to enroll in the program to receive free medical care. They know that if they get sick and walk into a clinic or emergency room they will get enrolled in Medicaid prospectively or receive treatment pro bono.

A work requirement would just make it less likely for able-bodied adults without dependent children, known as ABAWDs, to register for the program. The work requirement would reduce Medicaid enrollments, but Medicaid costs might well go up because the eligible ABAWDs would go to the emergency room rather than receive routine care elsewhere.

Also, it would be politically very difficult to enforce a work requirement for medical services […] Suppose a Medicaid eligible ABAWD enrolls in Medicaid and then fails to do his work assignment (a very likely outcome based on experience with other work requirements). This individual then shows up sick in the emergency room or clinic. Is the government going to deny him medical care because he did not do his workfare assignment? Of course not.

Meanwhile, people who are unable to work could lose coverage

Ok, so if Medicaid work requirements probably won’t work, and would instead be, as Rector puts it, “theoretical and symbolic,” why are healthcare advocates fighting so hard against them? After all, these work requirements could lead to more red states expanding their Medicaid programs under the Affordable Care Act. Just this week, Virginia’s Republican-controlled legislature backed a budget that would expand Medicaid under the ACA, as long as it could institute work requirements. The expansion would bring coverage to an estimated 300,000 uninsured Virginians.

The problem is that instituting a work requirement means that every Medicaid recipient will have to verify that they are either working or exempt from the requirement. The Kaiser Family Foundation points out:

Because of complex documentation and administrative processes, some eligible individuals could lose coverage. There is a real risk of eligible people losing coverage due to their inability to navigate these processes, miscommunication, or other breakdowns in the administrative process. People with disabilities may have challenges navigating the system to obtain an exemption for which they qualify and end up losing coverage.

So, for example, states could decide to use eligibility for Social Security Disability benefits to determine who is exempt from the work requirement because they’re not “able-bodied.” What about the tens of thousands of people currently receiving Medicaid who haven’t qualified for social security, but who have an illness or chronic health problem that prevents them from working?

Or say you’re a working parent who simply forgets to send in the form verifying your employment one month– will you get kicked off your coverage? If you think that’s an exaggeration, consider Indiana, which just received the go-ahead to institute work requirements in Medicaid. When it switched to an automated welfare system in 2008, there were over a million benefit denials in three years (including Medicaid denials), often because paperwork was lost or recipients forgot to sign a form somewhere. (One woman lost her Medicaid benefits because she couldn’t attend a recertification appointment on a day she was being treated for cancer– her benefits weren’t restored until the day after she died).

Or say you’re the mother of two autistic children, and your kids are school-aged, which means that you might not qualify for a caregiver exemption to the work requirement (depending on your state’s rules). However, finding and keeping a full-time job can be nearly impossible given the number of meetings and appointments with teachers, psychologists, and therapists that parenting two autistic sons requires. With the new work requirements you’d still be unable to work– and now have no health insurance.

Some of these problems could be avoided if states invest a ton of resources into ensuring that the work requirements are administered effectively, but the Trump administration will not be providing any extra funds. Also, the states that are pushing for these work requirements see them as a way to save money. As Judy Solomon of the left-leaning Center Center on Budget and Policy Priorities, told Vox, “At the end of the day, it’s going to have people who need health care lose coverage.”

A number of reporters have noticed what Andrew Sprung of the Xpostfactoid blog has termed “Medicaid envy.” Lower to middle income Americans who get private coverage on the ACA marketplaces or through an insurer have expressed anxiety about rising premiums, deductibles, copays and drug costs, anger at surprise bills, and confusion at the complexity of their health plans. And as Drew Altman, president of the Kaiser Family Foundation, pointed out last year, these folks “saw Medicaid as a much better deal than their insurance and were resentful that people with incomes lower than theirs could get it.”

It’s understandable why they’re angry– despite Republican claims to the contrary, Medicaid really is a great deal compared to private insurance. But as Atul Gawande, a surgeon and professor with the Harvard T.H. Chan School of Public Health (and also a New Yorker writer) has argued, there’s a better way to achieve a fairer healthcare system than work requirements that could take coverage away from the sick, disabled, and caregivers along with a very small number of people who may be unfairly mooching. A better solution, he says, is to give more people access:

“Anger about Medicaid is not surprising. We have taxpayers with jobs that provide no health coverage paying for poorer people to have coverage they couldn’t dream of — with no premiums, copays, or deductibles. This is bound to create bitterness about who is deserving and who is not. The solution isn’t to cut more people off.  That won’t soften the anger. What would is opening up Medicaid more widely, like Medicare. We don’t have these debates about Medicare because everyone contributes as they are able and everyone benefits.

“Work is an important goal. Health care is an important way to ensure that people can be well enough to work. Refusing health coverage to people unless they work is a proven recipe for more sick people, not more work.”