Warning: Use of undefined constant wp_cumulus_widget - assumed 'wp_cumulus_widget' (this will throw an Error in a future version of PHP) in /home/customer/www/whatifpost.com/public_html/wp-content/plugins/wp-cumulus/wp-cumulus.php on line 375
 Matt Taibbi’s misdiagnosis of our ailing health care system
≡ Menu 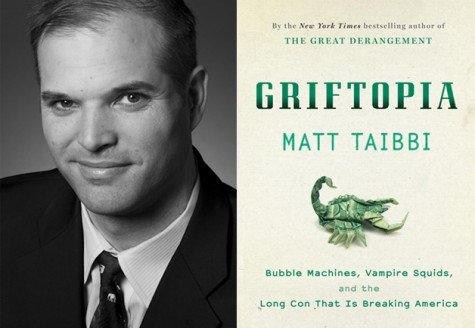 Earlier this month, with the What If computer out of commission after an incident with a space heater, I figured it was a good time to catch up on some reading.  The first book I picked up was Griftopia by Matt Taibbi.

Taibbi writes about politics for Rolling Stone, and lately he’s spent a lot of time covering the financial crisis, which is what Griftopia is about.  Most of the book is well-researched and fun to read- it’s hard to explain how international finance works and still be funny, but Taibbi pulls it off.  That said, in the book there is one chapter on the passage of health care reform called “The Trillion Dollar Band-aid” which is easily one of the worst pieces of reporting on the issue that we’ve seen so far.  Taibbi may know his stuff when it comes to banks and the federal reserve, but on health care he seems clueless.

Here’s why Taibbi thinks health reform, “might very well have been the worst bill ever to make its way through Congress”… and why he’s wrong.

In 1890, the Sherman Antitrust Act became the first measure ever passed by Congress to prohibit anti-competitive practices in business– price-fixing, monopolies, cartels, things like that.  For decades the Sherman Act didn’t apply to insurance companies.  Insurance wasn’t considered interstate commerce (at the time the Act passed, the few insurance companies that existed were small and local) and was regulated by individual states.

But the 1944 Supreme Court ruling in United States v. South-Eastern Underwriters Association changed all that.  In its decision, the court found that federal antitrust laws did in fact apply to insurance.

In response to the ruling, Congress passed the McCarran-Ferguson Act:

For Taibbi, the McCarran-Ferguson Act is the cause of everything that’s wrong with our health care system.  He says:

“Here you have a cartel system in which individual customers, hospitals, and doctors alike are at the mercy of an unaccountable industry that can deny coverage or fix prices as it pleases, resulting in the crappy or even openly threatening service and ballooning costs that necessitated the call for health reform in the first place.  And all this is because of one law.”

“Anything less than a full repeal of McCarran Ferguson in a health care bill would be pointless.”

We’re still not sure how he came to this conclusion, which puts him at odds with, well, almost everyone who studies health care– including many people who support repealing McCarran-Ferguson.

Back in October 2009, the insurance lobby released a sham study claiming that health reform would cause premiums to go up.  Congress responded by announcing that they would seek to remove the industry’s antitrust exemption.  Health care policy experts were unimpressed.

“This is just barking up the wrong tree for health insurance,” said Scott Harrington, a professor of health care management at the Wharton School at the University of Pennsylvania. While many lawmakers are eager to pass some kind of health care bill, they “don’t have a clue how the antitrust exemption works. It might sound good, but I can think of very few things in the bill that would be less consequential for consumers of health insurance.”

“I see this mainly as a symbolic gesture of ‘we’re mad at the insurers for screwing around’ and this is one way to get back at them.”

“While the threat to repeal the exemption makes for good headlines, we can’t really see how it alters the business for the established publicly traded players.”

“I’m not sure what Congress thinks this will do,” said Hall, who has authored more than a dozen books on health care law and ethics. “There are state antitrust laws and state insurance regulators who carefully scrutinize insurance practices, and while they don’t do a perfect job, they are on the job.”

Meanwhile, the nonpartisan Congressional Budget Office estimated that repealing the antitrust exemption for health insurers “would have no significant effects on either the federal budget or the premiums that private insurers charged for health insurance.”

For example, Taibbi talks a lot about how the McCarran-Feguson Act lets insurance companies fixing prices, but Yale Law and Policy Review points out:

Health insurers are not now—and for the most part never have been—legally sanctioned to fix their prices. Therefore, they are already subject to some federal antitrust for price-fixing. In fact, there are even now pending several price-fixing suits against WellPoint, Inc. and other major health insurers. […] MFA repeal only regarding price-fixing would not outlaw any conduct that is not already illegal.

Meanwhile, the federal government, through the Federal Trade Commission and the Department of Justice, has some power to regulate insurance company mergers.  Mergers are a big reason why there is so little competition between insurance companies.  However (again, from the AP article):

With 94 percent of U.S. health insurance markets meeting the Justice Department standards for “highly concentrated” — meaning dominant insurers face little competition — most academics agree reform is needed.  But they point out that federal regulators could have prevented much of that concentration under existing law.

Since 1996, the federal government has cleared 400 mergers in the health insurance field, according to the American Medical Association.

“Some of the consolidation that took place was not challenged by the Justice Department, maybe because of a lack of will, rather than a lack of legal authority,” said Tom Greaney, a law professor at St. Louis University.

The McCarran-Ferguson Act also explicitly states that boycotts are not exempt from federal antitrust laws.  Taibbi quotes an aid to Mississippi Congressman Gene Taylor, who says that insurance companies threatened to stop issuing malpractice insurance to ob-gyn’s, neurosurgeons, and emergency room doctors if Mississippi didn’t pass tort reform.  This would be a boycott, prosecutable under federal antitrust laws.  Taibbi never explains why it wasn’t.

Instead he  jumps into a long section about how insurance companies didn’t pay for wind damage after Hurricane Katrina– a weird example, because property insurance is very different from health insurance.

Don’t get us wrong: insurance companies are still awful

All of this isn’t to say that repealing the exemption would be a bad thing,  just that compared to the rest of the health reform bill it’s inconsequential.

Claiming that the McCarran Ferguson Act is responsible for everything that’s wrong with the insurance industry and “might be a more shameful chapter in our history than Jim Crow laws,” (which laid the legal basis for the disenfranchisement and segregation of generations of African Americans) as Taibbi does, is a huge exaggeration.

Next post: What the Florida court ruling means for reform