Is Obamacare working? Here’s what we know so far

When President Obama announced last Tuesday that 7.1 million people had enrolled in plans through Obamacare’s online marketplaces, it took a while for the applause and cheering from supporters to die down. They had reason to be excited. Seven million– based on the Congressional Budget Office’s estimate of how many people would sign up in the first year– was their original target for enrollments. After the disastrous launch of healthcare.gov, the CBO said enrollment would likely be more like six million, but at the end of February it looked like they’d fall short of even that.

But while hitting 7 million signups is an important symbolic milestone, it doesn’t answer the most important questions surrounding the new law:

It is however, one of many good signs we’ve seen so far.

7.1 million enrollees: what that really means

One thing that’s important to understand is that the CBO never said enrollment had to hit six or seven million for the Affordable Care Act to be successful. That was just their best estimate of how many people would sign up, based on how health reform went in Massachusetts (which remember was the model for Obamacare). It was the White House that first promoted 7 million marketplace enrollees as the definition of success.

Republicans seized on this seven million figure too, particularly because until this past month, it looked like signups would barely break 5 million, supposedly proving that Obamacare plans were unpopular. However, in the last few days of March there was an enrollment surge bigger than even Obamacare supporters expected. The final tally, along with images of the huge lines of people waiting for help with their applications, pretty much killed the idea that consumers would rather pay the penalty than purchase Obamacare plans:

Effect on the uninsurance rate

Republicans have been trying to pick apart the administration’s final tally a couple ways. The first is by claiming that many of the last minute signups won’t pay their first month’s premiums and thus won’t actually be covered. However, Charles Gaba, who has been tracking signups meticulously on his website ACASignups.net, notes that the trend so far in most states is that “around 80-85% of those enrolled to date are paid up, with another 10% paying up over the following month or so (when their policies actually kick into effect).” There’s really no reason to think that the latest signups will be any different.

Republicans are also arguing that 7.1 million doesn’t represent much of a reduction in the uninsured, since many of them probably had coverage before. There’s some truth to that, writes New York Magazine’s Jonathan Chait. However:

In many ways, seven million wildly understates the number of Obamacare beneficiaries. It ignores people under 26 enrolling in their parents’ plans, and people enrolling in Medicaid. It likewise ignores the fact that probably millions of people have obtained insurance off the exchanges, and millions more can still obtain insurance through the exchanges after the deadline has passed.

According to Gaba, if you add all those sources of coverage, the number of people with “Obamacare coverage” is over 30 million… and growing.

With so many different ways for people to get coverage, the best way to gauge the new law’s effect is by looking at how uninsurance rates have changed. We don’t have official numbers yet, but early data from pollsters and researchers looks promising.

A recent Gallup poll found that the percentage of people without insurance in the first quarter of 2014 dropped to 15.6%– the lowest it’s been since 2008: 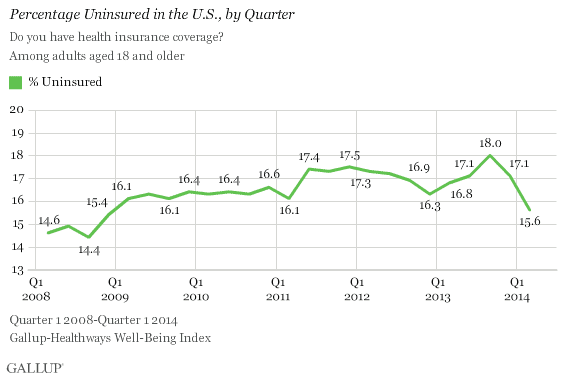 Keep in mind that the graph shows the average of all the interviews they did between January 2 and March 31– since the uninsurance rate was dropping the whole time, the current figure is likely even lower says Gallup:

Even within this year’s first quarter, the uninsured rate fell consistently, from 16.2% in January to 15.6% in February to 15.0% in March. And within March, the rate dropped more than a point, from 15.5% in the first half of the month to 14.5% in the second half — indicating that enrollment through the healthcare exchanges increased as the March 31 deadline approached.

Meanwhile another study– this one from the RAND corporation– found that 9.3 million more people have insurance now than before Obamacare. There are some questions about the accuracy of this one, since it shows a huge increase in employer insurance that surprised most health policy experts, but the overall numbers are similar to other studies.

Two other important things to remember about all this:

1. The number of people with coverage is expected to grow a lot over the next few years. It’s clear that the CBO’s estimate for first year enrollment was pretty freakin’ accurate, so it seems more likely that its other estimates will be correct as well. According to Adrianna McIntyre, a health policy researcher writing for The Week:

There’s a bigger enrollment story on the horizon. The agency expects enrollment though the insurance exchanges to more than triple by the end of 2016, to 22 million. Total enrollment is expected to level out at 24 million to 25 million in 2017.

She explains the “crazy enrollment math” is partly because the penalty for not having insurance will grow over the next couple years and partly because people will become more familiar with the subsidies to help pay for insurance (a Kaiser tracking poll last month found that 40% of Americans were unaware of them).

2. Obamacare addresses the problem of underinsurance too. Even for those who had to buy new coverage because their old plans were canceled, the new law may still be helping. Many plans sold on the individual market before were what Consumer Reports calls “junk insurance.” We gave an example of one of these plans in a recent post:

Take 56-year-old Diane Barrett. CBS News reported that under Obamacare her premiums skyrocketed from $54 a month to $591 a month. Sounds terrible, but when Mediaite’s Tommy Christopher looked into it, he found that Barrett’s old plan only paid the first $50 of the medical services it covered, which would have left Barrett with enormous out-of-pocket costs if she ever did get sick.

Barrett was counted as insured before Obamacare, but if she ever got sick her plan would be basically useless. Everyone that bought new coverage this year got a plan that meets certain basic standards.

Will premiums go up next year?

This is a hard question to answer. Even before the last-minute surge, it did look like there were enough young, healthy people signed up to keep premiums down writes Kaiser Family Foundation president Drew Altman:

Even if enrollment of young adults stays where it is – at about one-quarter instead of 40%, which our analysis shows they make up among potential enrollees – premiums would only increase by two to three percent. Though even that isn’t quite right, since many insurers expected this and already built it into their premiums.

The fact that the last-minute surge of enrollees was so large is also a good sign, because, again looking at Massachusetts, it’s the young healthy people who tend to sign up last, usually right before the penalty hits.

However, even though the mix of young, healthy people looks good nationally, what’s really important is what’s happening at the state level, since each state has its own risk pool. It’s possible that some states will have more young, healthy people than insurers expected (keeping premiums low), while others will have fewer (causing premiums to rise).

Unfortunately we won’t know for sure until insurers release next year’s rates, and we won’t know officially how many uninsured people got coverage for a few months either. But based on what we know so far, it does seem like Obamacare is working as well as supporters hoped.

Next post: Tons of good news about Obamacare this week

Previous post: How to get covered now that the Obamacare deadline has passed