Warning: Use of undefined constant wp_cumulus_widget - assumed 'wp_cumulus_widget' (this will throw an Error in a future version of PHP) in /home/customer/www/whatifpost.com/public_html/wp-content/plugins/wp-cumulus/wp-cumulus.php on line 375
 Is Obamacare “rate shock” real?
≡ Menu

As the Affordable Care Act is implemented, one of the biggest questions is how much insurance will cost on the new exchanges. For most people it actually doesn’t matter– if you make less than four times the poverty line you qualify for subsidies limiting your out of pocket expenses, so no matter how high premiums get, you’d pay the same amount. But for individuals making more than $46,000 a year it could be a big deal– if premiums are too high this “rate shock” as it’s called could keep them from buying coverage. That’s bad news for them and bad news for Obamacare.

So it was a big relief when, in California, the bids from insurance companies came in much lower than expected. The CBO had estimated that “silver level” plans would cost $5,200 a year, but the actual price will be about $3,500– one-third cheaper. Still, some conservative critics say the California bids do, in fact, demonstrate rate shock. For example, Avik Roy, former healthcare advisor to Mitt Romney, claims the bids show Obamacare will increase premiums by 64-146%.

How do these critics get rate shock, when most healthcare experts are finding the opposite?

New York Magazine’s Jonathan Chait notices that Obamacare critics have started paying a lot of attention to one demographic in particular:

Possibly the most misleading part of Roy’s astonishingly dishonest screed is the entry point for his pseudo-investigation:

If you’re a 25 year old male non-smoker, buying insurance for yourself…

For example, a 25-year-old male who lives in San Francisco …

Oregon’s exchange policies are about the same. Today, a 25-year-old male who lives in Portland…

Do you notice a pattern here? This is a bit like the traveling medicine show salesman who picks the same random volunteer from the crowd at every stop. You, sir — the healthy 25-year-old in front who has never been hospitalized or needed medication in his life! Step right up!

There’s a reason these columnists keep “randomly” choosing the healthy, non-smoking 25-year old man (aka, the bro) as an example. Insurers love covering these guys because they’re very unlikely to get seriously ill and need expensive medical care. However, insurers are less happy about covering young women, who may become pregnant which is expensive, and they absolutely do not want to cover older people and those with a history of expensive illness. And so, they offer super low rates to young, healthy men, and much higher rates to everyone else (or simply deny them coverage).

Under the Affordable Care Act insurers can’t do that anymore. While that’s good news for women, those with pre-existing conditions, and older Americans, yes that does mean premiums for young men who don’t get coverage through their employers will go up. Conservatives hope that young men will be shocked, shocked when they see these higher rates…

But before they bolt from Obamacare, says Jonathan Chait, young bros should consider this:

Suppose you are a non-smoking, non-sick, non-poor, completely healthy 25-year-old from a completely healthy family who does not get employer-provided health insurance. Yes, you will be paying higher premiums. Not 146 percent higher, likely Roy falsely claims, but higher. Yet you may also contemplate the varying probabilities that one day you will be one or more of the following:

At that point, the freedom-crushing regulatory burdens of Obamacare may turn into a blessing. And this, of course, is the entire concept of insurance.

We should also point out that young people are also much more likely to qualify for subsidies to help pay for coverage, as this graph from Project Millennial illustrates: 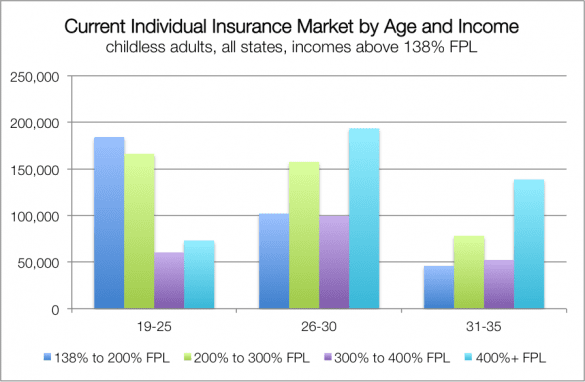 But the real benefit to young adults is the Medicaid expansion. Here’s the same graph as above, only now including those making less than 138% of the poverty line (and thus would qualify for Medicaid under the new law): 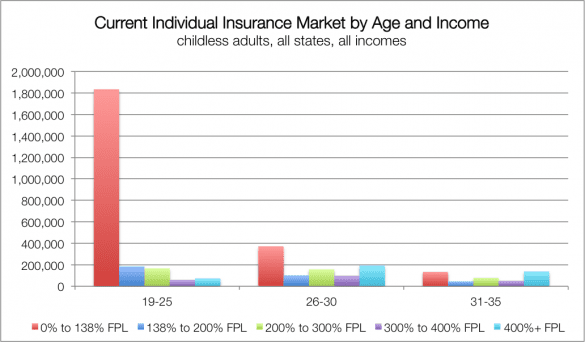 Almost two-thirds (63.4%) of childless young adults who had individual insurance in 2011 had incomes that would qualify for Medicaid in 2014. Medicaid offers generous coverage with little cost sharing. So, when people say that the Medicaid expansion is a BFD for this demographic, it’s not an exaggeration. That’s been largely lost in this debate.

Unfortunately, not all of these young adults will have access to Medicaid, as many states are choosing not to expand. If conservatives are seriously concerned for young adults, they should insist that states opt in.

Step #2: Compare apples to “oranges that the fruit guy may not let you buy”

To determine that Obamacare will supposedly raise premiums in California, Roy compared the price of plans that will be on the exchange to the teaser rates for the cheapest comparable plans on ehealthinsurance.com. Similarly, in Ohio a state Department of Insurance report said residents should expect insurance premium increases of 88% on the states exchanges next year. But it makes no sense to compare plans under Obamacare to those being offered now. Here’s why.

1. Plans on the exchanges have to meet minium standards

Under Obamacare, plans have to cover a set of “essential health benefits” and the most they can charge for deductibles and copays is $6,350. (And that’s for the cheapest plan without including subsidies. If you’re an individual making less than 200% of the poverty line– about $23,000– for example, the out-of-pocket limit is less than $2,000.)

The plans currently offered in Ohio and California don’t have to follow the same rules. The New Republic’s Jonathan Cohn points to the Saver 80 plan from United Health in Ohio. It has a $13,000 deductible, and doesn’t cover maternity, vision, mental health, prescription drugs, or any office visits aside from physicals. And that’s not even the skimpiest plan in Ohio– one of the two plans highlighted in the Department of Insurance analysis has a $25,000 deductible.

When critics compare premiums under Obamacare to the current system, they often fail to mention that insurance under Obamacare will be much better. Still though there’s a legitimate debate over how much plans should have to cover, and conservatives of course would argue that insurers should be allowed to offer less comprehensive plans. But skimpy coverage isn’t the only reason current plans are cheap…

2. Not everyone can get the cheap insurance now

The Washington Post’s Ezra Klein did the same search as Roy, and found that yes there are some really cheap plans (like, for example, HealthNet’s Value 4500, which according to ehealthinsurance, costs only $109 a month). But there’s a catch:

Click to buy the plan and eventually you’ll have to answer pages and pages of questions about your health history. Ever had cancer? How about an ulcer? How about a headache? Do you feel sad when it rains? When it doesn’t rain? Is there a history of cardiovascular disease in your family? Have you ever known anyone who had the flu? The actual cost of the plan will depend on how you answer those questions.

According to HealthCare.gov, 14 percent of people who try to buy that plan are turned away outright. Another 12 percent are told they’ll have to pay more than $109. So a quarter of the people who try to buy this insurance product for $109 a month are told they can’t. Those are the people who need insurance most — they are sick, or were sick, or are likely to get sick. So, again, is $109 really the price of this plan?

Yes some people will find their plans more expensive… but that’s because their insurance was made cheap by turning away sick people. As Klein writes:

To judge it from a baseline that leaves them out — a baseline that asks only what the wealthy and healthy will pay and ignores the benefits to the poor, the sick, the old, and women — well, that is a bit shocking.

Next post: What the DOMA decision means for same-sex health benefits

Previous post: How the sequester is affecting healthcare: Big cuts to medical research