Warning: Use of undefined constant wp_cumulus_widget - assumed 'wp_cumulus_widget' (this will throw an Error in a future version of PHP) in /home/customer/www/whatifpost.com/public_html/wp-content/plugins/wp-cumulus/wp-cumulus.php on line 375
 Introducing the Basic Health Program – the most important Obamacare provision you’ve never heard of
≡ Menu 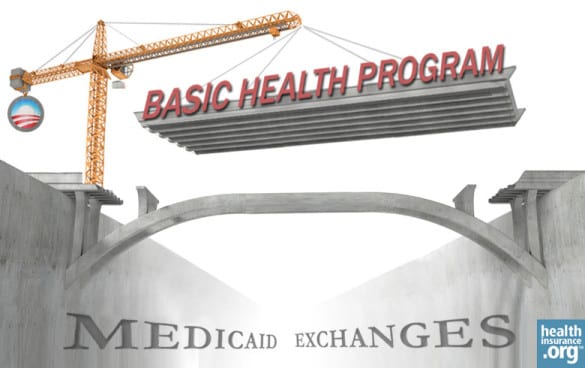 If you ignore the politics, the decision on whether or not a state should choose to participate in Obamacare’s Medicaid expansion should be a no brainer. States pay almost nothing– the federal government is paying for the entire cost of expansion until 2017 and 90% of the cost after that. Meanwhile, hundreds of thousands of their poorest residents gain coverage; hospitals see far fewer unpaid bills (which drive up prices for everyone else); and all that federal money coming in boosts state economies, creating thousands of jobs (and not just in healthcare).

The Medicaid expansion is such a good deal for states that even Republican governors in Ohio, Arizona, Iowa, Michigan, Indiana and New Jersey have signed on. And as more and more red states sign up, the politics become less of an issue; other Republican lawmakers in Utah, Tennessee, Missouri, Alaska and Florida are considering joining as well. Conservative think tanks have realized that they now need more substantive reasons to convince red state leaders not to join the Medicaid expansion. One argument, put forward by the Foundation for Government Accountability (FGA), is that Medicaid expansion will harm state economies by causing 2.6 million “able-bodied” Americans to drop out of the workforce.

For starters, the math in the report is garbage. The FGA “scholars” cherry-picked the highest estimate from just one study showing that Medicaid decreased the employment rate among childless adults– other studies have shown no effect– then applied that rate to everyone expected to enroll in Medicaid under Obamacare. This ignores the fact that that a huge proportion of those gaining coverage are, in fact, people with children. Before Obamacare, the maximum income to qualify for Medicaid was so low in most states that over two-thirds of uninsured, low-income parents were ineligible.

But really, the report isn’t pointing out an overlooked problem so much as trying to reframe a benefit of Obamacare. The whole point of the new law was to provide Americans with a way to get affordable coverage outside of an employer– and as a result, those who were stuck in jobs solely because that’s the only way they could get health coverage may choose to work fewer hours or drop out of the labor force altogether. Most people would say this is a good thing.

The FGA report does touch on an important point though. It says that Obamacare is structured in such a way that some low income Americans who might want to get a full-time job or work more hours will choose not to, because it would mean paying more than they could afford for health coverage. And we’re as surprised as anyone to be saying this, but… they kind of have a point. However, there is an Obamacare program for states (that hardly anyone has heard about) which would help: the Basic Health Program.

The FGA report includes this chart showing how as soon as your income rises above the Medicaid cutoff, you could end up paying hundreds of dollars more for coverage each year; thousands more if you have a medical problem:

Things are a little more complicated than the chart lets on though. For example, it only compares the cost of Medicaid to the cost of a silver plan– most people who are that close to the Medicaid cutoff could enroll in a bronze level plan for free. The downside of that though is that if your income is below 250% of the poverty line, you qualify for reduced out-of-pocket costs, but only if you get a silver plan; for the bronze plan your out-of-pocket costs can be as high as $6,350 annually (and twice that for families).

So really what happens if your income creeps above the Medicaid cutoff is that you have to choose between (1) paying no premiums, but having totally unaffordable out-of-pocket costs if you get sick; or (2) paying an extra $44 per month, and having out-of-pocket costs that are probably still unaffordable, just less so. So if you’re right at the cutoff, it makes more financial sense to turn down raises or extra hours unless they provide enough of an income boost to cover your extra health costs. None of these are great options for low income families.

While the FGA report has identified an actual problem with Obamacare, their proposed solution– states shouldn’t expand Medicaid– is idiotic. Sure, if you eliminate Medicaid, there is no Medicaid cliff, but that’s a little like proposing to stop house fires by getting rid of houses. For a real solution, states could choose to turn to an optional program in the law itself.

The ACA gives states the option of creating a Basic Health Program (BHP) for people who make too much to qualify for Medicaid, but are still considered low income: those with incomes from 133% to 200% of the federal poverty line. If a state does operate a basic health program it will receive federal funding equal to 95% of what enrollees would have received had they signed up for private plans on the exchanges.

New York is one of just two states so far (Minnesota is the other) that have taken up this offer. In an announcement a few weeks, the state outlined what its BHP plans would look like:

Basic health plans like those New York is proposing are obviously a good deal for consumers, since they won’t be stuck with unaffordable deductibles, and they’re obviously a good deal for the federal government, since it saves 5% on every enrollee. However, as Richard Mayhew, a health insurance expert who writes for the blog Balloon Juice has explained, even insurers and providers have reasons to get on board:

Why would insurers want to get in on this plan? For insurers, the answer is simple, this will be basically the only game in town as a $0/$20 Silver like policy will suck up the vast majority of membership from people making under 200% FPL. The other Silvers will be offered, but they are no longer cost competitive for this population group.

Providers are in on this for two reasons. The first is that it will be the only game in town for them even if it pays at a lower rate than they previously had accepted. Secondly, this could improve their cash flow and reduce bad debts due to high deductibles. Individuals who make under 200% FPL still had $500 deductibles and $2,000 to $2,500 maximum out of pocket limits on cost sharing assistance Silvers. Deductibles are smaller and cost sharing maximums are lower under the Basic plan. Docs will see fewer insured patients who can’t pay their deductible. This will benefit primary care providers while it is minor plus for specialists and hospitals.

Another big problem with the Medicaid cliff is what’s known as “churn.” People with incomes right around the Medicaid income cutoff also tend to have frequent income changes, meaning that they’d be bouncing back and forth between Medicaid and private plans. It’s expected that half of those with incomes below 200% of the poverty line will churn between Medicaid and a private health plan over the course of a year. Switching between public and private programs is an administrative hassle for insurers, the government, and enrollees (after Pennsylvania’s exchange enrolled one of my friends in both Medicaid and a private plan– her income means she qualifies for both– it took several weeks and numerous phone calls to the helpline to cancel the private plan), but more importantly, it can also disrupt continuity of care; the doctors who accept Medicaid are often not the same doctors in private health plan networks.

Again, the basic health program is meant to help. As the nonprofit website healthinsurance.org explains: “States can create BHPs that contract with Medicaid managed care organizations and jointly administer BHPs with Medicaid, effectively creating seamless coverage for everyone under 200 percent of poverty level, with continuity of benefits and providers.”

The one downside of basic health plans is that they create a new income cliff/churn point– this one at 200% of the federal poverty line. In New York, when the basic health plans take effect next year, a slight income change to 201% of the FPL could mean paying $100 more per month for coverage. Unfortunately, the only way to eliminate this new cliff would be to increase subsidies for private health coverage so that there’s not such a large jump in premiums and deductibles if you leave the basic health plan.  That would require an act of Congress, which is unlikely, so if there must be a cliff, 200% of the FPL is probably a better spot for it than at 138% of FPL. Incomes tend to fluctuate less at that level, and higher-paying jobs are much more likely to come with health benefits, meaning fewer people will be affected.

An ideal health system would probably have everyone in one system where they could see any provider (*cough single-payer cough*), but until then, the basic health program could be an extremely helpful bridge so that transitioning between Medicaid and private plans isn’t such a mess. Hopefully more states will try it.

Previous post: The deadline for filing your taxes has passed, but you may still be able to avoid Obamacare’s tax penalties