Warning: Use of undefined constant wp_cumulus_widget - assumed 'wp_cumulus_widget' (this will throw an Error in a future version of PHP) in /home/customer/www/whatifpost.com/public_html/wp-content/plugins/wp-cumulus/wp-cumulus.php on line 375
 Introducing “All-Payer”
≡ Menu

After six months of work, the co-chairs of the National Commission on Fiscal Responsibility appointed by President Obama have finally released a draft proposal for dealing with America’s national debt. Rising health care costs are by far the biggest contributor to the long term deficit, so it was no surprise that their proposal included a bunch of possible ways to control health care spending.

One suggestion stood out:

During the health reform debate, we heard plenty about the public option  but almost nothing about all-payer. We’ve been itching to talk about this, so thank you Debt Commission for bringing it up (although some of your other ideas we’re less than thrilled with).

Why are health care costs so high?

If you want to reduce the amount of money you’re spending on something there are two ways to do it:

The Affordable Care Act focuses almost totally on the first part– buying less of it– as the Washington Post explains:

Its many cost-control provisions are geared toward reducing the amount of care we consume, not the price we pay. The law encourages doctors and hospitals to join “accountable care organizations” that have financial incentives to limit unnecessary care; it beefs up “comparative effectiveness research” to weed out inefficient treatments; and it will eventually tax the most expensive insurance plans to restrain consumers’ superfluous use of health care.

Such measures could reduce redundant tests, emergency room visits and hospital readmissions, which would help control the costs of Medicare, where the government sets rates. But they are less likely to lower prices outside Medicare and stem the growth of private insurance rates.

What the new law doesn’t deal with is the fact that we pay more for each bit of care– for every drug, test, procedure, and hospital stay– than any other industrialized nation. That’s why we pay twice as much per person, yet see the doctor less often than they do.

You can see for yourself. This graph shows what some wealthy countries pay on average for a routine doctor visit: 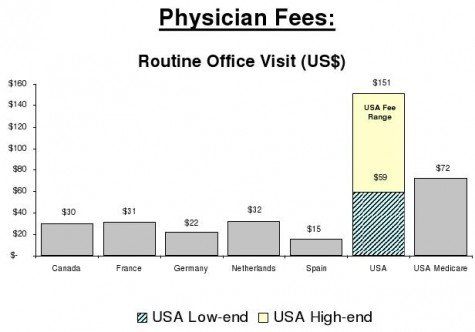 We pay anywhere from twice to ten times as much to see a doctor. We also pay way more for CT scans: 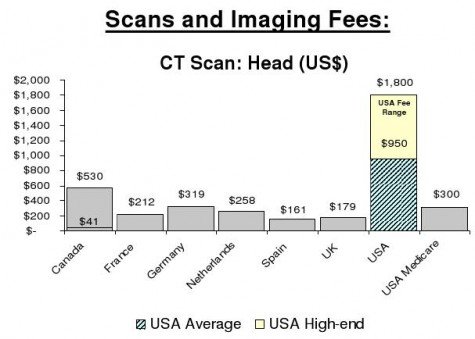 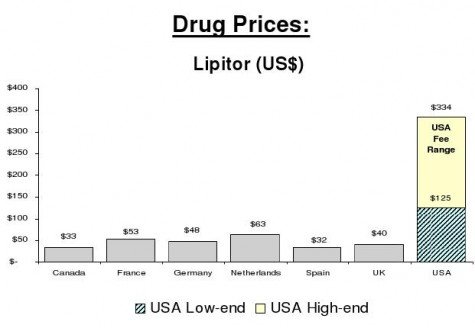 The list goes on. The question then is why we pay so much more than other wealthy countries for the same procedures.

How rates are determined in the U.S.

In public programs like Medicare, the government sets the rates.  But for the rest of us, insurance companies negotiate with providers to determine how much doctors and hospitals will be paid for providing care. That’s why you have a network of providers– “in network” means that your insurance company has a deal with that doctor or hospital.

The problem with this setup is that insurance companies are crappy negotiators. It’s not their fault though… in a way it’s ours. If a hospital charges too much, in theory the insurance company could just cut them out of their network. But we as consumers would be furious if we suddenly didn’t have access to certain prominent hospitals and health systems. Hospitals know this and jack up their rates accordingly.

For example, here’s what one insurer in New Jersey pays various hospitals: 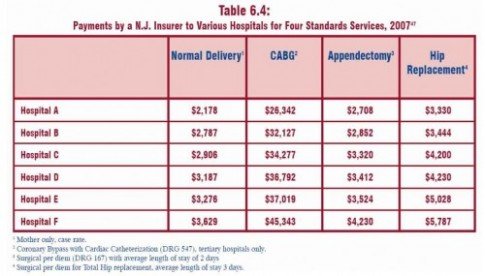 For coronary bypasses (CABG’s) the insurance company might pay anywhere from $26,000 to $45,000 depending on the hospital. That’s a $20,000 difference for the exact same procedure.

Or here’s another example from California:

These huge price differences might be ok if insurance companies did most of their business with the cheaper hospitals, but their customers usually pick the most expensive ones. The cost to us is the same no matter where we go, so we choose the hospital with the best reputation, or the one that’s most convenient because it has branches everywhere. Unfortunately for the insurance companies, these are the ones charging $14,000 for an appendectomy, instead of $1800.

Meanwhile, the hospitals that don’t have the clout to charge as much as more prominent hospitals are on shakier financial footing. Often they get swallowed up by the larger health systems, who can then charge even more. Costs continue to skyrocket, driving our premiums up.

What does all this have to do with an all-payer system?

Good question. Most people have heard of single payer–that’s when the government acts as the only insurance provider (the “single payer”) and pays the health care costs for everyone. That’s the system Canada has, and it’s the system we have for senior citizens (Medicare).

Under an all-payer system you still have competing insurance companies, but the government sets the rates that doctors and hospitals are paid for procedures. Every insurance company pays the same rates. This is the system that many European countries, like France and Germany, use (although we should point out that in these countries insurers are also all nonprofits).

Now, before you dismiss all payer as government price controls, and just another weird, socialist European thing that would never work here, consider this: Maryland has had an all payer system for its hospitals since 1977.

The Wall Street Journal explains how it works:

The state commission has about 30 people on staff to come up with the rates for the state’s 47 acute-care hospitals. It also sets rates for privately insured patients at the state’s specialty hospitals.

The rates take into account each hospital’s wages, charity care and severity of patient illnesses.  The commission, for example, requires St. Joseph Medical Center in suburban Towson, part of Denver-based nonprofit Catholic Health Initiatives, to charge $984 for an overnight stay, and Johns Hopkins, $1,555. For a basic chest X-ray, St. Joseph’s rate is $81 and Hopkins’s rate is $155. The differences reflect Hopkins’s higher costs as a teaching hospital and its care for generally sicker patients.

Now, the typical complaint from conservatives is that government price setting will destroy innovation and lead to poorer quality care. Competition, markets, and all that. Which makes it all the more interesting that Maryland is the only state that has this government price setting, all-payer system. Guess which hospital U.S. News and World Report has ranked number one in its list of best hospitals in the United States for 20 years in a row.

On top of that:

So to recap, Maryland has had an all payer system since 1977 and they have:

If all-payer works, why wasn’t it in the Affordable Care Act?

In a word: politics. From the Washington Post again:

Remember how drawn-out the health-care battle was? It started in the spring of 2009 and was waged for a full year. The bill’s proponents in the White House and in Congress had some inkling of how tough the fight with the insurance companies would be. Taking on hospitals, doctors, and drug and device manufacturers as well — the people you’d face in a showdown over prices — might have been fatal.

And so, in the health reform debate, all-payer and really any other way to deal with the price problem (for example, Medicare negotiating lower prices for prescription drugs) was off the table. For now at least. The Affordable Care Act will provide almost universal coverage and should reduce Medicare costs, but private insurance costs will continue to increase as long as doctors and hospitals continue to charge whatever they can get away with. With single payer off the table nationally, maybe it’s time to modify a slogan from the single payer advocates: “All Payer Now!”

Next post: The Food Safety Bill: Congress (finally) does a thing, Part 1