Warning: Use of undefined constant wp_cumulus_widget - assumed 'wp_cumulus_widget' (this will throw an Error in a future version of PHP) in /home/customer/www/whatifpost.com/public_html/wp-content/plugins/wp-cumulus/wp-cumulus.php on line 375
 In Defense of Canada
≡ Menu

In Defense of Canada

Usually this is the kind of thing we cover in our weekly health snapshots or on our Twitter feed, but it’s so good we thought it deserved its own post. It’s the Incidental Economist’s Aaron Carroll debunking a bunch of false statements about Canada’s health care system made by opponents of health reform.  Here’s a sample:

The wait times that Canada might experience are not caused by its being a single payer system.

Do you know who pays for care for the elderly in the United States?  Medicare.

Do you know what Medicare is?  A single-payer system.

So our single-payer system manages not to have the wait times issue theirs does. There must be some other reason for the wait times. There is, of course. It’s this: 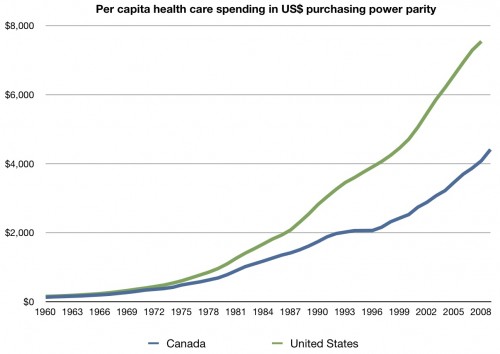 Canada isn’t some dictatorship. They aren’t oppressed. In 1966, the democratically elected government enacted their single-payer health care system (also known as Medicare). Since then, as a country, they have made a conscious decision to hold down costs. One of the ways they do that is by limiting supply, mostly for elective things, which can create wait times. Their outcomes are otherwise comparable to ours.

Please understand, the wait times could be overcome. They could spend more. They don’t want to. We can choose to dislike wait times in principle, but they are a byproduct of Canada’s choice to be fiscally conservative.  They chose this. In a rational world, those who are concerned about health care costs and what they mean to the economy might respect that course of action. But instead, we attack.

Check out the rest of them here.

Previous post: Common ground between Republicans and Democrats on health reform… sort of