Warning: Use of undefined constant wp_cumulus_widget - assumed 'wp_cumulus_widget' (this will throw an Error in a future version of PHP) in /home/customer/www/whatifpost.com/public_html/wp-content/plugins/wp-cumulus/wp-cumulus.php on line 375
 How the sequester is affecting healthcare: Patients turned away from cancer clinics
≡ Menu

How the sequester is affecting healthcare: Patients turned away from cancer clinics

With Washington distracted by so-called scandals, one of the biggest problems that Congress should be working on– $1.2 trillion in indiscriminate spending cuts, aka the sequester– hasn’t received much attention. Meanwhile the effects of the sequester are starting to ramp up– in a recent poll 37% of Americans report being affected by the cuts, up from 25% two months ago, and according to National Journal, we won’t feel the full impact until later this summer. 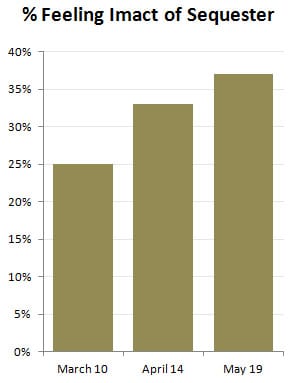 The Washington Post’s Ezra Klein can tell you why the sequester and its short-term, short-sighted deficit reduction is “pretty much insane” for the U.S. economy right now. (“It’s as if we took all the good ideas people had to help the economy and reduce the deficit and did the opposite.”) But we wanted to look at the ways the sequester is affecting healthcare in particular– it’s too wide-reaching for one post, so this is just the start of a series we’ll continue over the coming weeks.

First up: sequester cuts have caused cancer clinics to turn away thousands of patients and caused airline delays for business travellers. Guess which issue Congress fixed…

How the sequester cuts funding for cancer clinics

Remember that the sequester was structured so that both parties would hate it– half the $1.2 trillion in cuts would come from defense (which Republicans tend to like), and the rest from domestic programs (which Democrats like). On the domestic side, Social Security, Medicaid, and certain programs for the poor were exempt from any cuts. Medicare was partially shielded– payments to providers were cut just 2%, a fraction of the cuts made to other programs.

That 2% might not sound like a lot, but it’s a huge problem for cancer clinics, because of the way they get paid by Medicare. The website The Hill explains:

Cancer clinics believe their budgets were cut excessively because of the way Medicare determines their payments. Medicare pays clinics the cost of the drugs they buy, plus 6 percent to cover the clinics’ administrative costs. And the drug costs are set by law.

When Medicare applied the sequester, it cut clinics’ entire payment. They argue that the cost of their drugs should have been exempt, and the cut should have only come from the additional 6 percent reserved for clinics. When the cut is applied to the entire payment, clinics say, every patient comes at a financial loss.

So say for example a dose of a cancer drug costs $100. The cancer clinic would get $100 to pay for the drug, and then $6 to cover the cost of storing and administering it. If the 2% cut only applied to the administrative costs, that wouldn’t be a huge deal– the clinic would be losing only 12 cents for each dose they administer. But the way the sequester works, the cost of the drug itself as well as administering it are both hit by the sequester. That 2% works out to a loss of $2.12 per dose. And since the drug prices are set by law, clinics can’t simply pay drug companies less for the drugs– so the entire $2.12 comes out of their $6 administrative fee, meaning cancer clinics are facing a 35% cut.

As Ted Okon, director of the Community Oncology Alliance told the Washington Post:

“If you get cut on the service side, you can either absorb it or make do with fewer nurses. This is a drug that we’re purchasing. The costs don’t change and you can’t do without it. There isn’t really wiggle room.”

The effect of these cuts

It’s hard to feel too bad for these cancer clinics– many have pretty large profit margins (for example, Cancer Treatment Centers of America founder Richard Stephenson made enough money off cancer patients that he was able to funnel millions of dollars to Tea Party groups like FreedomWorks) and some have been accused of turning away Medicaid patients and less healthy patients to pad their success rates (again CTCA was a big offender here).

Still, the sequester cuts are large enough that some clinics are turning away patients. There aren’t hard numbers on how many patients will be affected, but there are plenty of anecdotal reports– the Post article describes clinics in New York and Charleston, South Carolina that have told patients to begin seeking treatment elsewhere.

Most will be able to get treatment in hospitals, but it will likely be much be more expensive for both Medicare and the patients themselves:

One study from actuarial firm Milliman found that chemotherapy delivered in a hospital setting costs the federal government an average of $6,500 more annually than care delivered in a community clinic.

Those costs can trickle down to patients, who are responsible for picking up a certain amount of the medical bills. Milliman found that Medicare patients ended up with an average of $650 more in out-of-pocket costs when they were seen only in a hospital setting.

For patients taking part in clinical trials, however, the situation is more dire:

Devin Goodman, an administrator at Glacier Oncology in Kalispell, Mont., the last private cancer clinic in the state, told The Huffington Post that funding cuts from sequestration may make it too costly for patients undergoing clinical trials to continue chemotherapy there. Since a cancer care facility has to be approved for a clinical trial, the patients can’t just go to the hospital in town. Instead, some may have to travel more than 2,000 miles to Washington, D.C., or Boston to continue treatment.

A number of lawmakers have asked Secretary of Health and Human Services Kathleen Sebelius to reconsider how Medicare is implementing the cuts or use her authority to soften the impact. But that’s the thing about big, dumb across-the-board cuts like the sequester– they’re indiscriminate, and Sebelius says she doesn’t have the power to soften the cuts for cancer clinics. If Congress want to provide relief to cancer patients it’s going to have to act.

Oh and by the way, not only is the sequester making it harder for current cancer patients to get treatment, it will make life harder for future patients as well, by slashing funding to scientists looking for cancer cures. We’ll look at how the sequester is affecting health research next time.

Next post: How the sequester is affecting healthcare: Big cuts to medical research