Warning: Use of undefined constant wp_cumulus_widget - assumed 'wp_cumulus_widget' (this will throw an Error in a future version of PHP) in /home/customer/www/whatifpost.com/public_html/wp-content/plugins/wp-cumulus/wp-cumulus.php on line 375
 How the sequester is affecting healthcare: Big cuts to medical research
≡ Menu

How the sequester is affecting healthcare: Big cuts to medical research 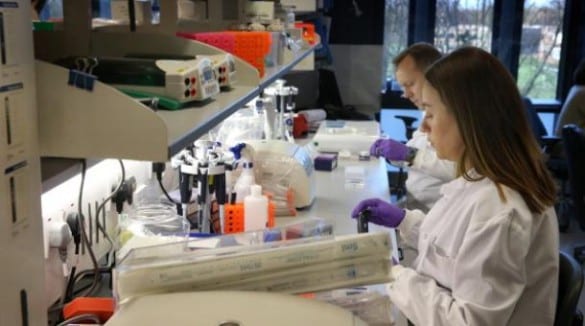 Last week we looked at the sequester’s impact on current cancer patients: cuts to cancer clinics’ reimbursements are forcing many patients to seek treatment elsewhere (if they can). In Part 2 of our series on the sequester, we look at how cuts to the National Institutes of Health, which spends billions to fund medical research, will affect future cancer patients. And future alzheimers patients. And future patients with mental health issues. And…

What is the NIH?

The NIH’s research is divided into two parts: extramural and intramural. Extramural funding makes up about 80% of the NIH’s budget and goes to over 300,000 researchers at universities and other institutions across the country. There are also about 6,000 scientists working directly for the agency’s intramural research labs, which include 27 different institutes and centers (like the National Cancer Institute, the National Institute of Mental Health, and the National Institute on Aging), as well as the world’s largest hospital devoted to entirely to clinical research.

The development of blood tests to detect HIV and hepatitis, the first AIDS drugs, and vaccines against hepatitis, influenza, and HPV all came out of the NIH’s intramural research. Extramural grants to university researchers have produced countless other medical breakthroughs.

How much is being cut?

Unlike some other health programs like Medicaid and Medicare, the National Institutes of Health will face the full impact of the sequester, losing 5% of its budget in 2013, and 8.2% annually in years going forward. In 2013, the cut works out to about $1.6 billion.

What effect will the cuts have?

1. Cutting funds to existing projects: Five percent may not sound like a lot, but researchers say that even a small cut can have a big impact on a scientific investigations:

“You can’t just get there 5 percent slower,” said Stephanie Zerwas, [a University of North Carolina researcher hoping to find the genes that place young girls at risk for developing devastating eating disorders]. “If you have a five percent cut to the number of (research subjects) you’re looking at, you are not going to be able to achieve the statistical power you need to determine whether something is significant. You might be more likely to see false positive. Or not catch something that’s really there.”

To give just one example, a group of researchers at Temple University led by Dr. Stephen Houser, were planning to test three therapies, one of which could transform the way patients recover after a heart attack. They now have to decide whether to test only two of the methods, or partially test all three:

2. Fewer new projects will be funded: As a result of the sequester, the NIH will award approximately 700 fewer new research grants this year. The Incidental Economist’s Bill Gardner, a professor at Ohio State University, explains why this is a big deal, particularly for his field, mental health (thanks to the sequester, the National Institute of Mental Health is funding almost 10% fewer new projects):

Medical research is like buying lottery tickets. The great majority of projects make small contributions to knowledge or human well-being, but every so often there is a transcendent victory. It’s impossible to know in advance which project will be a triumph. If you want to find one, you need to buy a lot of tickets.

3. Driving scientists out of research

#NIHSequesterImpact will only make this worse. I’m leaving research when I finish my PhD. No money, and no one cares.nexus.od.nih.gov/all/wp-content…

The biggest worry many organizations have is that if the sequester cuts are left in place it will drive scientists away from lifesaving research. Janis Abkowitz, president of the American Society of Hematology president, which focuses on blood disease research, tells the Washington Post:

“These cuts will have an exponential effect on the future of research and medicine: an entire generation of scientists may be turned away from careers in research and never return.”

Linda Malkas, deputy director of research at City of Hope, a clinical-research center, hospital, and medical school near Los Angeles, says the cuts will change cancer research “not just this year, but for years to come. That sounds dramatic, but it’s true. Some brilliant young scientists will just say there are easier ways to make a living than cancer research.”

Some Republicans say that the private sector will step in with increased funding, but most of the research the NIH funds (according to former NIH director Elias Zehouni, 55-60%) is for basic science, to simply understand biology. Private companies use that basic science research to develop new drugs and treatments (in what’s called applied or translational research), but they’re unlikely to do it themselves– basic science is necessary but it’s not where the money is.

“They’re waiting for people like us to take it farther along the development pathway before they’re willing to think about coming in and offering support or partnership.”

4. Driving scientists out of the U.S.: With government funding being cut in the U.S., researchers are increasingly turning to other countries who are funding biomedical research. For example:

Michael Hendricks, 40, is a neuroscientist studying the basic functioning of the nervous system in roundworms. He’s hoping his work will provide a research foundation for advances in treat of human diseases like Alzheimer’s and Parkinson’s.

With funding drying up in the U.S., he’s leaving a job at Harvard University to set up his own lab at a large research university in Canada.

“There’s a diminishing sense that the U.S. is the place to be,” he said. “There are more opportunities in China or in Singapore or increasingly in the Middle East where there are these brand new research institutions where funding is not an issue and where they have facilities that are on par with the best in the U.S.” […]

Meanwhile, without funding to continue their research, more foreign students who come to the U.S. to study and build technical skills are returning to their home countries.

“People like me going to Canada is small scale stuff,” said Hendricks. “But the many tens of thousands of foreign Ph.D. students and post docs—who were trained with U.S. taxpayer money and many of whom would probably prefer to stay in the U.S.—will leave to pursue better career opportunities in Asia and Europe.”

5. Lost economic opportunities: When NIH grants are cut, it sucks money out of local communities– this money covers the cost of hundreds of thousands of jobs at universities around the country. Worse for the economy in the long run, though, is that funding cuts make it less likely that researchers will make significant breakthroughs– the kind that could form the foundation of entire new industries.

Francis Collins, the current NIH director, looks towards other countries, and finds that as the U.S. has been cutting back, China and India are increasing funding by 20 percent a year, Brazil, South Korea and Japan by 10 percent, Germany by 8 percent. He says:

“It seems what we, alone, have adopted a strategy of cutting just at the time where everyone else has looked at our success story – and the way in which this kind of research stimulates the economy. We seem to have forgotten that.”

Previous post: How the sequester is affecting healthcare: Patients turned away from cancer clinics