Warning: Use of undefined constant wp_cumulus_widget - assumed 'wp_cumulus_widget' (this will throw an Error in a future version of PHP) in /home/customer/www/whatifpost.com/public_html/wp-content/plugins/wp-cumulus/wp-cumulus.php on line 375
 How the government shutdown is affecting America’s health
≡ Menu

How the government shutdown is affecting America’s health 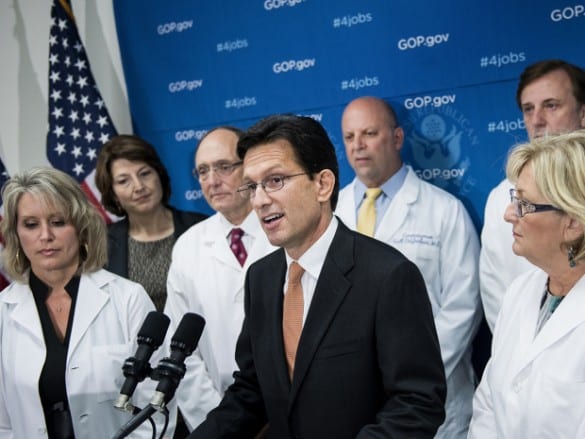 House Republicans, who used to be doctors, dress in lab coats to protest closure of NIH during the government shutdown… which they caused. Also, earlier this year, these same Reps cut NIH funding. Sigh.

This week we were pretty psyched that the big health care story would likely be good news: uninsured Americans finally enrolling in coverage under Obamacare starting October 1. Unfortunately that will have to wait a bit. With the healthcare marketplaces struggling to handle all the traffic (healthcare.gov had seven million visitors in the past 24 hours– more than Southwest Airlines gets in a month say White House officials), and some glitches that will hopefully be fixed in the next few days, the big health care story is Republicans in Congress forcing a government shutdown unless Democrats agree to defund Obamacare.

The shutdown won’t stop the new law– like Medicare and Social Security, Obamacare spending is mandatory and continues in the event of a shutdown. However, there are a bunch of other federal health-related programs that are affected.

The NIH is the biggest source of funding for medical research in the world. Existing research projects will continue to be funded during the shutdown, but the agency has had to stop processing new applications for research.

Even more troubling though, is the situation with the NIH Clinical Hospital, the nation’s largest hospital dedicated solely to medical research, where patients from all of the country go to receive experimental treatment for illnesses when conventional treatment hasn’t worked. Again, existing patients will continue to be treated (although kids won’t get to see therapy dogs), but new patients aren’t being admitted. According to NIH director Francis Thomas, 200 patients who otherwise would be admitted each week during the shutdown will be turned away– that includes 30 children, most of them cancer patients.

The Incidental Economist’s Aaron Carroll, a professor of pediatrics, is livid:

“Do you know who goes to the NIH itself for cancer care? People for whom no other options exist. They are usually the people with the worst disease, who don’t have much hope anywhere else. They go to the NIH to get cutting edge experimental treatment […] I hope [Congress] takes a few minutes to consider what the parents of these kids must feel like.

House Republicans apparently realize that denying potentially life-saving treatment to kids is bad PR, and have tried passing stand alone bills that would fund just the NIH (along with the other most visible and unpopular effects of the shutdown: veterans services, DC’s government, the national guard, and the national parks service).

Obama and the Democrats have rejected this piecemeal approach, believing that it would set a dangerous precedent. They’re not alone in this– the American Public Health Association has also rejected any bill that would fund just the NIH while ignoring other critical federal agencies. APHA’s executive director, Dr. Georges Benjamin, released a statement saying:

“Congress should instead focus its efforts on ending the government shutdown and putting an end to the senseless cuts to nondefense discretionary programs through sequestration to ensure all of our nation’s public health agencies and programs are adequately funded.”

Benjamin brings up a good point– the same Republicans that are suddenly very concerned about funding the NIH cut its funding earlier this year:

NIH lost 5 percent of its budget—or $1.7 billion—when the cuts included in the Budget Control Act went into effect last spring. It has adjusted by eliminating at least 700 research grants, and slowed down priorities such as developing a universal flu vaccine. As NIH director Dr. Francis Collins told the Huffington Post in August, “God help us if we get a worldwide pandemic.”

The Centers for Disease Control

Thanks to the shutdown, the CDC will have to halt its flu program, just as flu season is starting:

Every fall, the Centers for Disease Control and Prevention monitors the spread of flu and figures out how best to direct vaccine programs around the country. During the shutdown, however, the agency will be “unable to support the annual seasonal influenza program,” according to a memo from the Department of Health and Human Services.

And the flu might be the least of our worries:

The CDC also has to stop providing “support to state and local partners for infectious disease surveillance.” And the agency will have a “significantly reduced capacity to respond to outbreak investigations, processing of laboratory samples, and maintaining the agency’s 24/7 emergency operations center.”

The Food and Drug Administration

According to the Department of Health and Human Services:

FDA will be unable to support the majority of its food safety, nutrition, and cosmetics activities. FDA will also have to cease safety activities such as routine establishment inspections, some compliance and enforcement activities, monitoring of imports, notification programs (e.g., food contact substances, infant formula), and the majority of the laboratory research necessary to inform public health decision-making.

We should note that this doesn’t mean that all food inspection stops– the Washington Post’s Brad Plumer reports that USDA will still be able to inspect meat and poultry facilities, and the Food Safety and Inspection Service can recall workers if there’s an emergency, but if a non-meat producer is shipping food tainted with salmonella, we won’t know until after a lot of people get sick.

Like we said earlier, Medicare and Medicaid will continue to pay for enrollees’ healthcare, so they don’t have to worry about that (unless they live in DC apparently). But they might want to worry about this:

CMS would be unable to continue discretionary funding for health care fraud and abuse strike force teams resulting in the cessation of their operations. Fewer recertification and initial surveys for Medicare and Medicaid providers would be completed, putting beneficiaries at risk of quality of care deficiencies.

Remember that all of this originally happened because Republicans wanted to halt Obamacare, although lately they’ve stopped talking about that so much– now it’s unclear what they hope to get out of this. It sounds like they don’t even know anymore– according to Indiana Rep. Marlin Stutzman:

“We aren’t going to be disrespected. We have to get something out of this. And I don’t know what that even is.“

Meanwhile, as the GOP figures out a way to save face, it’s putting the country’s health at risk.

Next post: How Kathleen Sebelius should have answered Jon Stewart’s question about mandates

Previous post: Will Pennsylvania’s Medicaid expansion alternative even get approved?