Warning: Use of undefined constant wp_cumulus_widget - assumed 'wp_cumulus_widget' (this will throw an Error in a future version of PHP) in /home/customer/www/whatifpost.com/public_html/wp-content/plugins/wp-cumulus/wp-cumulus.php on line 375
 How the fiscal cliff deal does (and does not) affect health care
≡ Menu 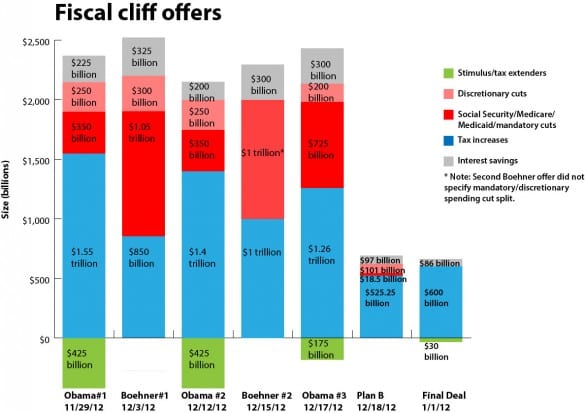 All right, so Congress has finally passed a fiscal cliff deal. The biggest news is that taxes will go up on the wealthy– although “wealthy” is now defined as anyone making more than $400,000 ($450,000 for couples). The deal also extends $30 billion worth of stimulus measures that should help the economy as it recovers, including five year extensions of the American Opportunity Tax Credit, which can be claimed for college-related expenses; the Child Tax Credit; and the Earned Income Tax Credit for low income Americans; and a one year extension on unemployment insurance

There are also a bunch of business tax breaks, benefiting everything from wind energy to Nascar track construction, a temporary farm bill fix, and an extension of the pay freeze on members of Congress. Oh, and of course there are provisions in the deal that will affect health care.

1. A doc fix that cuts Medicare payments to hospitals

One component of the fiscal cliff was a massive 26.5% automatic cut in Medicare payments to doctors, thanks to a flawed formula that Congress passed back in 1997. Since 2003, Congress has passed a series of short-term fixes to keep Medicare payments to doctors stable, and the latest fix was set to expire on January 1. (For a more in-depth explanation of the “doc-fix,” check out our earlier post here.)

The fiscal cliff deal postpones this automatic cut for another year at a cost of $30 billion. About half of that will be paid for by cuts in Medicare payments to hospitals over the next ten years (seniors will see no changes in benefits).

One section of the Affordable Care Act that didn’t get much attention, called the Community Living Assistance Services and Supports (CLASS) Act, created a new voluntary government-run, long-term care insurance program– basically a public option for long term care. However, in 2011 the White House announced it was suspending this part of the health reform law, because there was no way to implement the program so that it was both voluntary to enroll  and sustainable in the long run. That decision simply put implementation of the CLASS Act on hold– the fiscal cliff deal takes it off the books altogether. (For more info, check out our CLASS Act primer.)

You might remember that when the public option was killed during the health reform negotiations, the Senate replaced it with funding for loans to start non-profit, health insurance co-ops. The Affordable Care Act included $3.8 billion for these loans, and Health and Human Services has already loaned out half of that money to 24 nonprofits across the country. The fiscal cliff deal doesn’t take back the money that’s already been loaned out, but it does cut all but 10% of the $1.9 billion that hasn’t been spent yet. That remaining 10% will cover the administrative costs of working with the 24 plans that have already launched.

How the fiscal cliff deal will not affect healthcare

One of the ideas Republicans had suggested as part of fiscal cliff deal was raising the Medicare eligibility age from 65 to 67. As we pointed out at the time, this is a pretty bad idea– luckily it didn’t make it into the final deal.

Another way the fiscal cliff could have affected health care is through “sequestration.” That’s the name for the automatic spending cuts scheduled to take effect as part of last year’s budget deal, including a 2% cut in Medicare reimbursement rates along with pretty big cuts in defense and domestic spending. The fiscal cliff deal postpones these cuts for another two months, while the White House and Congress work out another deal.

What else isn’t in the deal

One stimulus measure– a temporary payroll tax cut– was not extended, meaning that taxes will in fact go up for middle class families as a result of the deal. Americans earning $30,000 a year will take home $50 less per month. Those earning $113,700 will lose $189.50 a month.

The deal also didn’t address the debt ceiling, which we’re scheduled to hit sometime in February. Republicans are threatening not to raise the ceiling unless President Obama and Democrats in Congress agree to big spending cuts (which of course they haven’t specified). So while at the end of 2012, failure to reach a budget deal could have gradually pushed us into a recession, now, thanks to Congressional Republicans, at the start of 2013, failing to reach a budget deal could trigger an immediate global financial crisis.