Warning: Use of undefined constant wp_cumulus_widget - assumed 'wp_cumulus_widget' (this will throw an Error in a future version of PHP) in /home/customer/www/whatifpost.com/public_html/wp-content/plugins/wp-cumulus/wp-cumulus.php on line 375
 How common are police shootings? No one knows because no one’s counting.
≡ Menu

How common are police shootings? No one knows because no one’s counting. 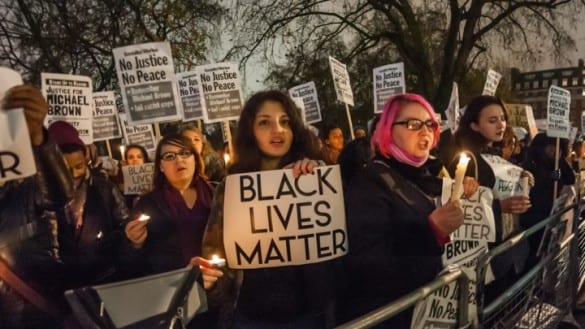 A few weeks back, when a grand jury failed to indict the police officer who shot and killed an unarmed teen in Ferguson, Missouri, sparking waves of protest, former NYC mayor Rudy Giuliani had this to say on Meet the Press:

The fact is that I find it very disappointing that you’re not discussing the fact that 93 percent of blacks in America are killed by other blacks. We are talking about the significant exception here [in the Brown case]. I’d like to see the attention paid to that that you are paying to this.

Plenty of people have already pointed out that Giuliani’s statements are both (1) offensively misleading (he neglects to mention that 84% of whites are killed by other whites); and (2) willfully ignorant of the point of the protests. Atlantic Magazine’s Ta-Nehisi Coates puts it succinctly in “The Gospel of Rudy Giuliani”:

Yes. It’s almost as if killers tend to murder people who live near them. Moreover, it seems that people actually hold officers operating under the color of law to a different standard.

But as a healthcare blog, we were interested in his dismissal of police violence as a “significant exception.” Of course other homicides happen much more frequently, but since we’re hearing a lot about police killings lately, we were curious– what are the exact figures? Are these shootings becoming more common? Are they more likely to occur in certain areas? How many people who are killed were unarmed? How much more likely are police to shoot people of color?

Turns out Giuliani wasn’t able to offer an exact figure because no one is keeping track.

To be fair, the federal government does sort of try to keep track of police shootings. The closest thing we have to an official figure comes from the FBI’s Uniform Crime Reporting (UCR) program, which shows that since 2008, roughly 400 people have been killed by the police annually. The problem is that the UCR relies on data voluntarily provided by state and local police departments, and as ProPublica explains:

Vast numbers of the country’s 17,000 police departments don’t file fatal police shooting reports at all, and many have filed reports for some years but not others. Florida departments haven’t filed reports since 1997 and New York City last reported in 2007.

Then there are issues with the data that is reported. The form only lets departments report “justified” police homicides– if a police killing is deemed unjustified, it would just be lumped in with all the other homicides. And if the justification for a police shooting is still being investigated, most departments will leave it out of the report altogether.

Two other agencies also attempt to count police shootings– the Bureau of Justice Statistics and the Centers for Disease Control– but their data is just as bad. Reuben Fischer-Baum, a journalist with Nate Silver’s FiveThirtyEight website, who took a thorough look at all these stats, concludes simply, “It’s more than 400.”

Meanwhile, The Washington Post points out that there’s even less information on officer-involved shootings that don’t result in death:

“We do not have information at the national level for police shootings that result in non-fatal injury or no injury to a civilian,” Michael Planty [one of the Justice Department’s chief statisticians] said.

Comprehensive statistics on officer-involved shootings are also not kept by any of the nation’s leading gun violence and police research groups and think tanks.

Do we have any idea how many people are killed by the police every year?

There have been some non-governmental attempts to put together a more accurate picture of police shootings. Perhaps the most thorough is the Killed by Police Facebook page, which aggregates links to news articles on police-related killings.

Still it’s hard to verify what on the list is accurate without reading the articles. FiveThirtyEight randomly sampled 146 of the reports, removed accidental deaths, incidents where the officer was off-duty, and incidents where the cause of death was hard to pin down, and found that 85% were deaths where the police were definitely directly responsible. Applying that percentage to all the reports listed on the Killed by Police, and they got about 1,000 deaths per year– more than double what the FBI report shows.

For context, that’s maybe not a surprisingly high number in comparison to the 15,000 homicides annually in the U.S.– police shootings make up about 7% of the total. But as Jerome Karabel, a professor of sociology at U.C. Berkeley, it is surprisingly high compared to other countries:

This level of police violence in the United States is an extraordinary aberration among wealthy democratic countries. In Germany in 2011, there were six police killings; in England in 2013, there were none. To be sure, the United States is a much more violent society than Germany and England; in 2013 the American murder rate was five to six times higher. But this disparity hardly explains a rate of killings that The Economist estimates is 100 times greater than in Britain.

Are people of color disproportionately targeted?

Even though we know that police killings are underreported, it’s possible to find trends in the data we do have. ProPublica analyzed the 1,217 police shootings listed in the FBI report from 2010 to 2012, and found that young black males (age 15 to 19) were 21 times more likely to be shot and killed by the police than their white counterparts.

Between a lack of complete data from the FBI and a small sample size (the overall risk of a young person of any race being killed by the police is minuscule), ProPublica warns not to put too much stock in the exact figure, but the disparity almost certainly exists:

David Klinger, a University of Missouri-St. Louis professor and expert on police use of deadly force, said racial disparities in the data could result from “measurement error,” meaning that the unreported killings could alter ProPublica’s findings.

However, he said the disparity between black and white teenage boys is so wide, “I doubt the measurement error would account for that.”

Which jurisdictions have the most police shootings?

Of course, police officers have a difficult job and sometimes have no choice but to use force. On the other hand, it’s clear from recent videos of police shootings that for at least some cops, that’s their very first instinct. Slate’s Jamelle Bouie describes the police shootings of John Crawford, Kajieme Powell, Levar Jones, and Tamir Rice, which were all caught on tape:

The common thread in all of these isn’t police violence as much as it’s the sudden use of force. The victims never have a chance to react. Instead, police enter, weapons drawn, ready to kill. And when they do kill, they almost never face criminal charges.

A lot of this has to do with the culture of individual police departments. For example, in Cleveland, where a 12 year-old with a toy gun was killed, the Justice Department had recently found a pattern of excessive police force, with officers “placing themselves, subjects, and bystanders at unwarranted risk of serious injury or death.” Meanwhile, other departments have made a conscious effort to reduce the use of force– Bouie points to Philadelphia where federal officials were brought in to review the department’s practices, and officers are now being trained to de-escalate confrontations before they turn deadly. Philly.com recently reported that, “As the new policies have been phased in, the total number of shootings to date—fatal and nonfatal—has plummeted from 48 in 2012 to 35 in 2013 and to 18 so far this year, according to the department.”

In the past, federal monitors have typically been brought in only after major public outcry— like in Los Angles after the “Rampart scandal” or in Cincinnati, where the shooting of a teen by police set off three days of rioting. National reporting on police shootings could facilitate a more proactive approach, by helping to identify which departments have the best practices and which we should be keeping an eye on. Some police departments may not even know they’re more violent than others.

As Bouie concludes his piece (and really you should read the entire thing):

Bad cops—violent cops—hurt the profession as a whole. They create mistrust, and it make it hard for good officers to do their jobs. And on the other end, a legal system that won’t prosecute bad officers or hold them accountable for errors—or even record and document police shootings—is one that generates anger and hostility. […]

For police, this is dangerous. At best, it leaves you with communities where residents refuse to cooperate with police, where they would rather tolerate crime than work with an institution that hates them and treats them as subhuman. At worst, it explodes into fire, as people reach their limits and rebel against the all-but-official decree that their lives don’t matter.

After watching nationwide protests unfold against police brutality, members of Congress did what they have seemed incapable of doing for years: something.

A bill passed by both chambers of Congress and headed to President Barack Obama’s desk will require local law enforcement agencies to report every police shooting and other death at their hands. That data will include each victim’s age, gender and race as well as details about what happened.

Next post: Our guide to getting covered under Obamacare (updated for 2015!)

Previous post: Republicans are suing the President over Obamacare– but is it a case they actually want to win?