Warning: Use of undefined constant wp_cumulus_widget - assumed 'wp_cumulus_widget' (this will throw an Error in a future version of PHP) in /home/customer/www/whatifpost.com/public_html/wp-content/plugins/wp-cumulus/wp-cumulus.php on line 375
 House could vote on reform this Sunday!
≡ Menu

House could vote on reform this Sunday! 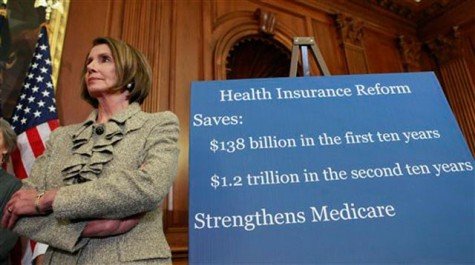 There has been a lot of big health care news in the past 48 hours.  Here’s the recap:

The Congressional Budget Office released it’s score of the final version of the bill. The score is good news for Democrats.  According to the CBO, the reform bill will:

Open Congress has a great, easy to read chart comparing the CBO score of the reconciled bill to the previous Senate and House versions.

Now that the CBO score is out, the House has released the text of the bill.  (For those that don’t have a couple hours to kill, and copies of the Internal Revenue Code of 1986 and the Social Security Act lying around, there’s a section by section summary, which explains how it amends the Senate version, here.)

House leaders promised they’d wait 72 hours after releasing the text of the bill before holding a vote.  Which means the clock is ticking, and the House could vote as soon as Sunday.

Meanwhile, there’s intense pressure on House Democrats who are still undecided.  Dennis Kucinich (D-OH), already flipped sides, and announced yesterday that he will vote for the reform bill this time around.  Kucinich who advocates a single-payer system, is the only Representative left in Congress who voted against the original bill because it didn’t go far enough in reforming the health care system (Eric Massa also voted against the original bill for similar reasons.  However, he has since resigned from Congress, because, well.. we’re sure you’ve heard all about THAT by now…)

Some of the pro-life Democrats in the House, who were threatening to vote “no” because the new version contains the Senate’s slightly less restrictive abortion rules, have said they can support this bill after all.  These include Dan Kildee (D-Mich), who before coming to Congress spent 6 years training to become a Catholic priest, Tom Perriello (D-Mich.), and Jim Oberstar (D-Minn.), the former co-chair of the House pro-life caucus.

Which means that the last holdouts are the conservative “Blue Dog” democrats.  All eyes are on them.  For example, Jason Almire (D-Penn.), who voted against health reform  in the fall, has met with President Obama twice this month, and received a phone call from Air Force One.  Tea Party activists had two planes circle through his district trailing banners urging him to vote no on health care.  Pro-reform advocates have held rallies at his offices in western Pennsylvania this week.

Still, Democrats are already extremely close to the magic number of 216 votes.  Reports are saying that the White House and House Democrats are within five votes of passing the bill.  Jonathan Haitt of The New Republic, thinks that’s a good sign:

I have always thought that the key is to get within four or five votes. Once you’re there, you’re very likely to win. Why? Because then the White House and Democratic leaders can concentrate all their attention on a few holdouts. And they can make an irresistible argument: If you don’t vote for this bill, you will be responsible for the political and moral disaster that ensues. I just don’t think anybody is willing to be the person who kills health care reform.

Look for the pressure on Representatives like Altmire to intensify even more in the coming days.  If the House does pass the bill, then it’s onto the Senate for the final vote.  The Senate is using reconciliation to pass the bill in the Senate, and Democrats have more than the 50 votes they’ll need.

The drama (if you can call it that) instead will come from how the parliamentarian interprets the arcane rules of the Senate.   Senate Republicans have promised to use every method at their disposal to block or stall the bill, and it will be up to Senate parliamentarian Alan Frumin to decide how the debate proceeds.  He’s getting so much attention these days that the AP is calling him a “Rock star in the health care debate.”

That’s all for now.  As soon as we hear of any new developments we’ll let you know.