Warning: Use of undefined constant wp_cumulus_widget - assumed 'wp_cumulus_widget' (this will throw an Error in a future version of PHP) in /home/customer/www/whatifpost.com/public_html/wp-content/plugins/wp-cumulus/wp-cumulus.php on line 375
 Hillary Clinton wants universal coverage– but what’s her plan to get there?
≡ Menu

Hillary Clinton wants universal coverage– but what’s her plan to get there? 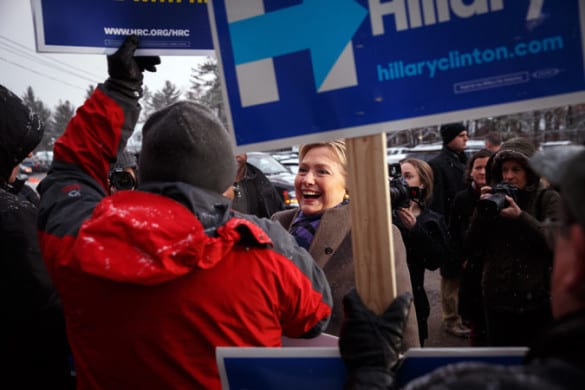 [This is the second post in a series on the health plans of the 2016 presidential candidates. Part 1, which looked at Bernie Sanders’ health plan, is here.]

Here’s what the 2016 Democratic candidates for president agree on: They agree that healthcare in America is better since the Affordable Care Act. They also agree that there are still problems that need to be fixed, and they mostly agree on what those problems are– a list that looks pretty similar to one we made a while back:

Where they differ is on how to fix them. Bernie Sanders proposes a totally new system: one single-payer plan covering everyone. As we’ve said before, it could be a great idea, potentially solving every problem on that list (and then some) all at once. Still, single-payer doesn’t automatically mean that people would be better off. For example, if we simply moved everyone into traditional Medicare, which is a single-payer plan, most people would end up with higher out-of-pocket costs, and its low reimbursement rates could force providers out of businesses. To judge any plan– single-payer or otherwise– you have to look at how it balances benefits and costs; and in Sanders’ plan those key details are a mess.

Hillary Clinton’s approach on the other hand is to build on the ACA. Clinton doesn’t provide detailed cost estimates for her proposals, but they’re all small enough changes that it’s easy to imagine how they might be paid for. In a way though, this also highlights a problem: even if all of her proposals were in place, the major issues with our health system would still remain. In other words, unlike Sanders’ plan, the numbers add up– but they don’t add up to nearly enough.

Here’s how the proposals Clinton has released so far would address the problems from that list at the top:

ON OUT OF POCKET COSTS: Three free sick visits. The ACA requires all plans to cover certain preventive care services for free, but if you need to go to the doctor when something’s wrong (or if think there might be), you could be looking at a huge deductible. And as U.S. News and World Report recently pointed out, the line between free preventive care and costly sick care can be blurry. For example, a middle-aged woman might go to the doctor for a mammogram, which under the ACA is free, but if she asks about a troubling cough or back pain during the same visit, she could be charged for that diagnosis. Free sick visits would help avoid that kind of confusion and make it easier to get potential problems diagnosed early.

Tax credits to help cover excessive out-of-pocket costs. Under Hillary’s plan, Americans with out-of-pocket health expenses above 5% of their income would be eligible for a tax credit of up to $2,500 for an individual or $5,000 for a family. In a sense, this would effectively lower the ACA’s maximum out-of-pocket cost limit from $6,850 for individuals and $13,700 for families to $4,350 and $8,700 respectively (for most people).

ON NAVIGATING THE SYSTEM: Reliable information on insurance plans. The ACA says that insurance plans have to provide up-to-date information on what drugs are covered and which providers are in-network; in practice, provider networks and drug formularies are notoriously out-of-date. Hillary says she’ll enforce these rules more vigorously, and also vaguely promises to “adopt further steps to make sure that employers, providers, and insurers provide this information through clear and accessible forms of communication.”

ON PRICE GOUGING: New cost-sharing protections. Right now, even if you go to an in-network hospital, you could end up seeing an out-of-network doctor without your knowledge. It might be because the doctor in the ER is out-of-network, or because a doctor who’s in-network consults with one that’s not (a practice known as “drive-by doctoring”)– either way it could leave you on the hook for huge surprise bills. Clinton proposes new rules saying that patients can’t be charged more than in-network rates for any care received in an in-network hospital or in a true emergency.

At the most recent Democratic debate, Clinton dismissed Sanders’ single-payer plan as unrealistic, but endorsed his goal of universal coverage, saying: “We are at 90 percent coverage. We have to get the remaining 10 percent.” Yet as Ben Mathis-Lilley at Slate points out, Clinton has yet to explain how she’d do that:

On Clinton’s campaign website, for instance, there is a discussion of the need to “expand affordable coverage” and “make progress toward universal coverage” in general terms, but no proposal on the means for doing so. There is no plan. There is no practical road map. I asked the Clinton campaign about this, and they directed to me to several progressive proposals she’s made that are in fact quite specific about how she would reduce costs for people who already have insurance. But if you can tell me how President Clinton would provide coverage to the 11 percent of Americans who don’t have it right now, I’ll send you one American dollar (and update this article).

Now to be fair (and also because we want that dollar), reducing costs could encourage more people to sign up; the most common reason uninsured Americans give for not buying coverage is that they can’t afford it. However, Clinton’s plan doesn’t go all that far in addressing costs. A $4,350 out-of-pocket limit is more manageable than $6,850, but it’s hard to see that being the difference between buying a plan or not. Similarly, a $250 monthly cap on prescription drugs is an improvement, but that still works out to $3,000 a year– more than many Americans can afford.

Also, rather than making our healthcare system less confusing, some of Clinton’s proposals add even more complexity. For example, Clinton’s tax credit for out-of-pocket costs wouldn’t be applied automatically– you’d have to remember to claim it on your taxes. Even more confusing is how the tax credit would affect those making less than 200% of the federal poverty line. If you buy a silver plan, the out-of-pocket max is just $2,250 for individuals, so say you make $15,000 per year: with the tax credit your out-of-pocket max is effectively just $750. That’s great, but you have to know that silver plans have an extra subsidy, and then know there’s a credit to claim on your taxes– yet most uninsured people aren’t aware that any subsidies are available.

That’s not to say that Clinton’s proposals wouldn’t make tangible progress toward more affordable, easier-to-navigate coverage for everyone. Also, it’s easy to picture a political environment where they’d get enough votes pass. But as an overall vision of what healthcare could look like in this country, it’s disappointing.

At the end of the day, both Clinton’s and Sanders’ plans are better than anything Republicans have proposed. The worst case (and probably most likely) scenario for any Democratic plan is that it gets blocked by a Republican-controlled Congress, leaving things as they are. The Republican candidates, on the other hand, all want to repeal Obamacare– stripping coverage from millions of Americans– and haven’t offered an alternative.

Eventually the political situation could change though. If it does, it would be nice to have at least one plan ready to go that’s both ambitious and realistic enough to actually fix the biggest problems in our healthcare system. Since there are only two Democratic candidates left in the race, that either means Clinton offering more ambitious proposals or Sanders explaining how he’d pay for his. But for now, we’re still waiting.

UPDATE (2/23/16): Well that didn’t take long. An hour after posting this we discovered that Clinton has added a bunch more proposals to her campaign website within the past few days. (For comparison, here’s what the healthcare section of her site looked like a week ago.) In addition to the things we mentioned above, Clinton now says she would:

Unlike the proposals we talked about earlier, these new ones would expand coverage to more people, moving us closer to universal coverage. Whether they’d get us significantly closer is another question though. We’ll take a closer look in an upcoming post.

Next post: Ok, Hillary does have a plan to move (closer) to universal coverage