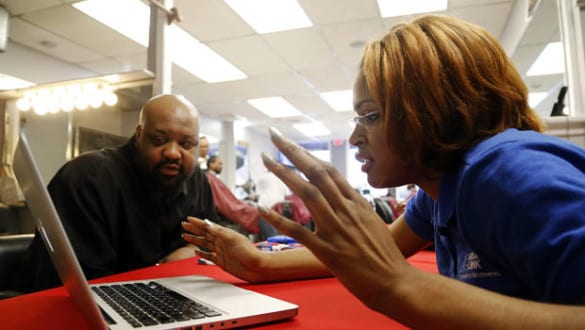 Over the next few weeks, chances are you’re going to see a news article in your local paper about how insurers are planning big rate hikes for their Obamacare plans in 2016. It’s becoming an annual summer tradition: insurers submit their proposed premiums for the following year, and local journalists forget that (1) only the biggest proposed increases get announced at first; (2) many of these increases are unlikely to get approved; and (3) all kinds of important information is missing. And so, just like last year— here’s why you should probably just ignore these articles until we get a more complete picture in a couple months.

There’s a provision in the Affordable Care Act that says insurers have to publish and provide an explanation for any requested premium increase of 10% or more. The idea is that regulators and customers should be able to see clearly which plans are jacking up prices– in some states regulators then have the power to reject these increases; in states that don’t, the hope is that the negative publicity will make insurers think twice. To make things even easier, healthcare.gov even has a tool showing which plans are proposing big rate hikes next year.

The problem, though, is that it provides a distorted picture of what’s happening to rates overall. Most plans are only proposing small increases (or possibly even decreases) in premiums, but this info is usually buried in the paperwork each company files with each state exchange. Some of these filings are “only” 40 to 50 pages long, but in Virginia, one company’s filing for just one type of insurance policy was 6,000 pages long. Information that’s easier to find tends to get reported on more, and right now only the big requested increases are easy to find.

These are only proposed increases

Last year many of the biggest proposed increases were rolled back by state regulators. To give just one example, in Connecticut an insurer proposed raising rates by 12.8% in 2015– the increase that regulators actually approved was just 3.1%. Insurance expert Richard Mayhew, who blogs at Balloon Juice, explained why insurers intentionally ask for a bigger rate increase than they think they’ll get:

From a predictive point of view, there is a modest correlation between initial ask and final approval. Insurance companies know this and they’ll ask for as much as they can get in order to anchor their end of the negotiation in the most favorable position. However, it is extremely rare for the initial request to be the same or lower than final rates.

Just like last year, pay attention to the math

Rate increases for some plans are a bigger deal than others. As The New York Times’ Margot Sanget-Katz points out:

Because customers are flocking to the cheapest plans in a given market, increases to those popular plans matter more than the increases to unpopular plans in the same market. If you bought a plan and face a big rate rise, you will face a hard choice between paying more and switching, which is why proposed increases to very popular products — as seems to be the case in Tennessee — are meaningful. But if a plan without many customers raises its prices, that’s less disruptive.

Also, the total dollar amount of a plan’s increase is important. Some plans requesting a big percentage increase, might still be cheaper than other similar plans on the exchange. Charles Gaba, writing for the website healthinsurance.org, shows how that math would work. Notice how in his example “Acme” has a much bigger percentage increase, but still ends up being cheaper:

If a plan remains the cheapest option, even after a big percentage increase, many customers may not even notice an increase in premiums, since the subsidies they receive– which are tied to the cost of the second cheapest silver plan– would likely increase too.

That said, it looks as though in some places the most popular plans really are seeking big rate increases. For example, in Tennessee, the state’s largest insurer, who covers nearly two-thirds of the Obamacare market, says it wants to increase premiums by 36% on average next year, saying underestimated the number and cost of new enrollees’ medical claims. We wouldn’t be surprised if this is a trend across the country, since the most popular plans by far were the cheapest silver-level plans. Mayhew explains that many of these plans might have been a little too cheap, either because (1) the insurer really did guess wrong about how healthy enrollees would be; or (2) it engaged in a “loss leader” strategy– setting prices too low in order to sign up a ton of customers, with the idea that many of them wouldn’t bother to switch if premiums jumped later.

Really though, even if popular plans are raising rates, that’s not necessarily a problem. The promise of the Affordable Care Act wasn’t that your premium would never increase– it was that you’d be able to shop around for the best deal, which might mean switching plans occasionally. So what really matters is what’s happening to the marketplace as a whole– are the prices of all the plans in the marketplace increasing on average? Or are cheaper plans available for those who switch?

The answer, at least for now is… we don’t know. The only plans we really have pricing information for are the small number of plans seeking the biggest rate increases. As the Kaiser Family Foundation’s Larry Levitt put it to The New York Times, “Trying to gauge the average premium hike from just the biggest increases is like measuring the average height of the public by looking at N.B.A. players.”

In other words, these big increases are probably the exceptions. For example, take Washington state. If you just look at the three insurers listed on healthcare.gov’s Rate Review site, you’d think that if they get their way, the average rate hike will be around 18%. But when Charles Gaba (this time writing for his own sight, ACASignups.net) dug a little deeper, he found that if you look at all 17 insurers on the exchange, the average rate increase they’re requesting is really just 5.4%– and there’s a good chance that state regulators will knock down some of the biggest hikes, lowering it even more.

So here’s the lesson from all of this: at least for now, if you see a scary headline about a big Obamacare rate increase, take a deep breath and ignore it.

Next post: What happens if you get Obamacare subsidies, but find out later that your income was too low to qualify?

Previous post: How a life-long Republican accidentally made the case for mandatory universal health coverage