Warning: Use of undefined constant wp_cumulus_widget - assumed 'wp_cumulus_widget' (this will throw an Error in a future version of PHP) in /home/customer/www/whatifpost.com/public_html/wp-content/plugins/wp-cumulus/wp-cumulus.php on line 375
 HealthCare.gov
≡ Menu 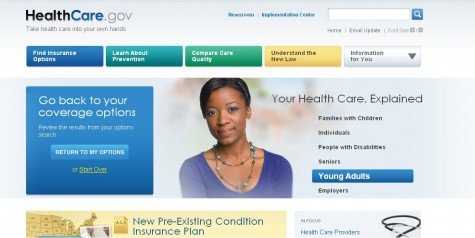 One of the first provisions of the new health care law to take effect said that the Department of Health and Human Services had to build a website for comparing insurance plans by July 1.  Well, the deadline is here, and yesterday HSS unveiled a great-looking, easy-to-use site:  www.HealthCare.gov

Maybe you are a 21-year-old woman who has just graduated from college in Ohio and haven’t found a job yet. Or you are a 49-year-old unemployed man with high blood pressure who lives in West Virginia. How would you know what insurance options you have under the new health-care law?

A Web site that the Obama administration unveiled Wednesday aims to give everyone the full range of public and private health insurance plans available to them based on their individual circumstances.

Users of the site — HealthCare.gov — will not need to divulge personal information such as their name, address or income. Instead, the site asks a series of questions including age, Zip code, job status and degree of difficulty affording health insurance, then uses a person’s answers to produce a detailed list of potential coverage options from among 5,500 private plans as well as the full array of federal and state programs such as Medicare and Medicaid.

The woman, for example, would be advised of six options, including a list of nearby clinics offering free or low-cost care. The man would have eight options, including a new state-based insurance program for people unable to get regular coverage because of pre-existing conditions.

For now, you still have to click on each insurer’s website to get pricing information.  But starting in October, HealthCare.gov will list prices for each plan and feature user-friendly charts comparing plans according to measures like deductible and co-pay levels.

There’s also helpful information explaining the new law and how your insurance options will change over the coming years, as more provisions take effect.  But for now, the immediate goal of the website, according to HSS Secretary Kathleen Sebelius, is to ensure that individuals and small businesses are aware of all the resources that are available to them.  For example, an estimated 5 million children are eligible for the Children’s Health Insurance Program (CHIP) but aren’t enrolled, often because their parents don’t know it’s an option.

HSS is still working to improve the site, but it’s already a great resource.  We highly recommend checking it out: www.HealthCare.gov