Warning: Use of undefined constant wp_cumulus_widget - assumed 'wp_cumulus_widget' (this will throw an Error in a future version of PHP) in /home/customer/www/whatifpost.com/public_html/wp-content/plugins/wp-cumulus/wp-cumulus.php on line 375
 Summer health care reading
≡ Menu 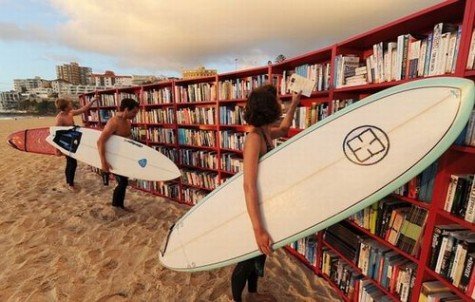 Regular readers of What If Post may have noticed that we haven’t been posting much lately. After the debt ceiling deal (which we covered here and here), Congress, the President, and most health policy experts took a summer break, so there’s been less to talk about this month. But in our beach reading, we did come across a bunch of really interesting research we want to share. (Plus, what better way to get ready for the back to school season?)

In this special summer studies edition of What If we take a look at the best ways to pay for health care, how much money doctors spend just dealing with insurance companies, who the tea party really is and more!

First up: a study in the journal Health Affairs compared U.S. and Canadian physician practices and found that U.S. doctors are spending four times as much money on administrative costs:

Physician practices, especially the small practices with just one or two physicians that are common in the United States, incur substantial costs in time and labor interacting with multiple insurance plans about claims, coverage, and billing for patient care and prescription drugs.

The best way to pay for health care? Depends how sick the patient is

Another surprising study, this one from the Journal of Health Economics, looked at what type of payment system would provide the best level of care to patients. Incidental Economist’s Austin Frakt explains how the experiment was set up:

The researchers asked medical students to choose the quantity of medical care to provide to hypothetical patients enrolled in either fee-for-service (FFS) or capitated insurance plans. Under FFS, physicians are paid for each additional unit of care. Under capitation, they receive one lump-sum payment regardless of how many units of care they provide. […] In advance of making the quantity selection, the physician has full information about how the quantity selected will affect payment, costs, and profit (or income) and how it will benefit the patient.

But what about patients who are sicker than average? For them, FFS doctors provide an almost exactly optimal level of treatment while capitation docs severely undertreat.

Ideally, then, we’d like to compensate doctors on a capitation basis for most patients, but on an FFS basis for the 5-10% of the sickest patients. Figuring out just how to do that, however, is a considerable challenge.

If McAllen, Texas rings a bell, it’s probably from an article in the New Yorker a few years ago that looked at why this little town had the highest Medicare costs in the country– $15,000, more than twice the national average. The story made a big splash with follow up coverage in other media outlets, and President Obama repeatedly cited the story in speeches and meetings while making the pitch for his health care plan.

Well now a new study from Thompson Reuters— this time looking at commercial insurance markets instead of Medicare– found that McAllen was one of the 10 cities with the lowest health spending for people under 65– about $2,950 per individual or 71.9 percent of the national average.

What gives? Why the enormous difference in the cost of care between the young, privately insured and the Medicare-covered elderly in McAllen? The author of the new study was hesitant to guess why, but Atul Gawande, author of the original New Yorker article took a stab at it:

“It could be because the patients have quite different health care needs. Or it could be because the private insurers have imposed more effective controls in those communities,” he wrote in an e-mail. “ The vast majority of health spending in McAllen in particular is for the publicly insured, but findings about the commercially insured give us insight into the whole. This report–with its findings about the relatively lower costs for children and young adults and relatively higher for the elderly–suggests both the factors I mention might be in play.”

The Washington Post’s Sarah Kliff provides the big takeaway of the two studies: “geographic variation in health spending is complicated.”

Who is the tea party really?

This might be our favorite recent study. Beginning in 2006, David E. Campbell, an associate professor of political science at Notre Dame, and Robert D. Putnam, a professor of public policy at Harvard, interviewed a representative sample of Americans about their political beliefs. They then returned to interview the same people again this summer:

As a result, we can look at what people told us, long before there was a Tea Party, to predict who would become a Tea Party supporter five years later. We can also account for multiple influences simultaneously — isolating the impact of one factor while holding others constant.

The results are fascinating. In the media, the tea party have tried to cast themselves as a new response to the big government economic policies of both parties. In reality, according to Campbell and Putnam, tea partiers are mostly the same old socially conservative staunch Republicans dressed up in tri-cornered hats:

Our analysis casts doubt on the Tea Party’s “origin story.” Early on, Tea Partiers were often described as nonpartisan political neophytes. Actually, the Tea Party’s supporters today were highly partisan Republicans long before the Tea Party was born, and were more likely than others to have contacted government officials. In fact, past Republican affiliation is the single strongest predictor of Tea Party support today.

What’s more, contrary to some accounts, the Tea Party is not a creature of the Great Recession. Many Americans have suffered in the last four years, but they are no more likely than anyone else to support the Tea Party. And while the public image of the Tea Party focuses on a desire to shrink government, concern over big government is hardly the only or even the most important predictor of Tea Party support among voters.

So what do Tea Partiers have in common? They are overwhelmingly white, but even compared to other white Republicans, they had a low regard for immigrants and blacks long before Barack Obama was president, and they still do.

More important, they were disproportionately social conservatives in 2006 — opposing abortion, for example — and still are today. Next to being a Republican, the strongest predictor of being a Tea Party supporter today was a desire, back in 2006, to see religion play a prominent role in politics. And Tea Partiers continue to hold these views: they seek “deeply religious” elected officials, approve of religious leaders’ engaging in politics and want religion brought into political debates. The Tea Party’s generals may say their overriding concern is a smaller government, but not their rank and file, who are more concerned about putting God in government.

Kaiser Family Foundation released the results of its monthly tracking poll of how the public feels about health care. Can’t say we’re shocked that overall public opinion is more or less unchanged: 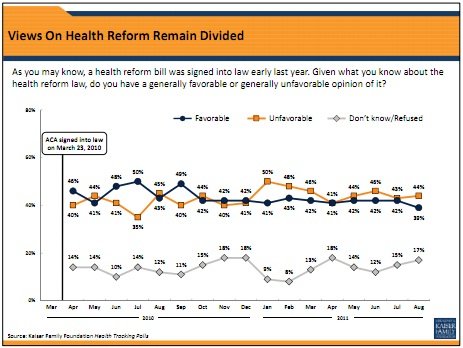 But the interesting part is that people without coverage, who would be most helped by the law, still don’t know what’s in it. Only half of the uninsured say they’re familiar with the parts of the law that would provide them coverage. Possibly because of this lack of awareness, nearly half of the uninsured also don’t expect to be affected by health reform. 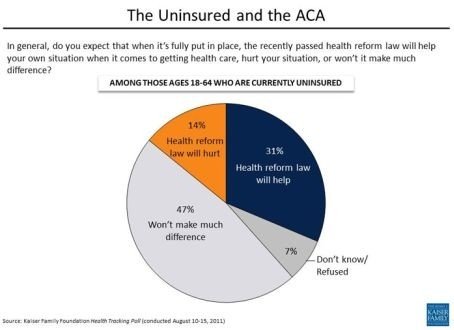 Another weird thing from the poll: the parties seem to be moving towards each other. There was a significant decrease in the percentage of Democrats who like the new law, while the reverse happened with Republicans– many more seem to be warming up to it. 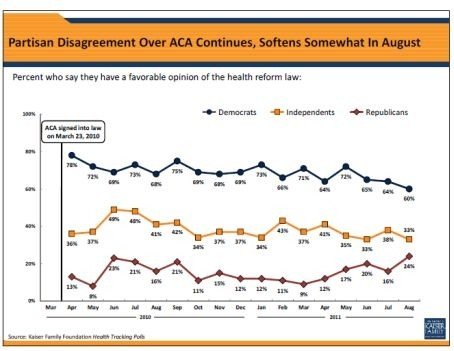 The Washington Post’s Sarah Kliff (yeah, this is the second time we’ve mentioned her– if you’re not following her and reading her stuff, you really should) believes the results mean both sides are losing the message war over health reform.

One last point from the poll: 66 percent of Americans they support the new requirement that insurance pay for the full cost of birth control and other preventive services for women under the new law. Only 24 percent oppose the decision.

That’s it for the summer studies edition. Starting next week health snapshots returns to its regular weekly schedule!

Previous post: Three charts to email to your rightwing brother in law