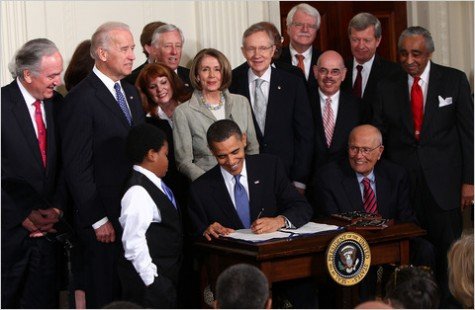 Hard to believe, but today marks the six-month anniversary of the passage of health reform.  We thought we’d take this opportunity to look at where things stand now.

New Benefits
A bunch of new benefits in the Patient Protection Act are scheduled to take effect today.  Some of these benefits apply to every insurance plan.  Other changes apply to all plans except those policies that are exempted as “grandfathered” plans. The AARP has a pretty good explanation of grandfathered plans:

Grandfathered plans were already in existence on March 23, 2010, when health care reform became law, and are protected so that people who have them and are satisfied with their current coverage can keep it. These plans lose their exemption, however, if they significantly reduce benefits or raise members’ costs. You will receive a notice from your insurer if your plan is grandfathered. [For more on grandfathered plans, see here.]

Here are the Benefits that apply to all plans:

That all changes starting now.  Insurance companies will still be able to screen for pre-existing conditions until the exchanges are up and running in 2014.  But once you get coverage, they can’t drop it when you get sick.

Benefits that apply to all non-grandfathered plans: 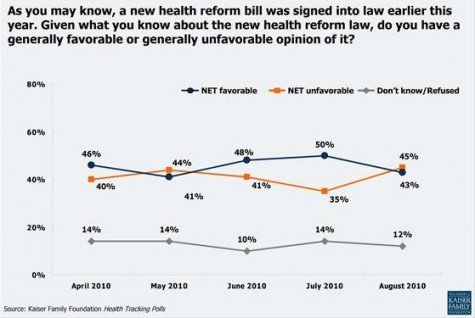 The non partisan Kaiser Family Foundation has been tracking attitudes towards the health reform law since it passed.  You can see in the graph that over the spring and early summer the new law was gaining in popularity, but in the most recent poll the public opinion was evenly split.

We’re not sure what’s caused the popularity of reform to drop, but a recent AP poll conducted by Stanford University and the Robert Wood Johnson Foundation might explain why it’s not more popular.  The poll found that a lot of people are still confused about what’s in the new law:

The survey also included a quiz to determine how much people know about the new law.   The outcome was revealing:

The poll’s questions included a true-or-false quiz on 19 items, some of which are in the law and others not. People were also asked how confident they were about their answers.  For the most part, majorities picked the right answers. But a sizable number also got things wrong. And right or wrong, people were unsure of their answers. Two-thirds or more were uncertain about their responses on eight of nine core provisions of the legislation.

Here’s another interesting point from the poll: For Republicans, having accurate knowledge of the law made no difference- they tend to oppose it regardless.  But for Democrats and independents (who make up a majority of the population) the more accurate knowledge people had of the law, the more they liked it.  From the AP article:

“Among Democrats and independents, the lack of knowledge is suppressing public approval of the bill,” said Stanford political science professor Jon Krosnick, who directed the university’s participation. “Although the president and others have done a great deal to educate people about what is in this bill, the process has not been particularly successful.”

Next post: Health Reform and Small Business: The Paperwork Problem