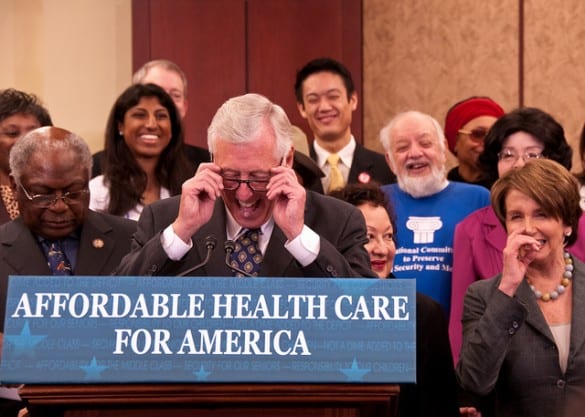 Today marks the second anniversary of President Obama signing the Patient Protection and Affordable Care Act into law. We figured it would be a great time to look at how the new law has changed health care, how the law itself has changed, and what to expect in the next year.

How the law has changed

Republicans have promised to overturn the entire thing, but so far all the changes to the new law have had broad bipartisan support. This year Congress:

But by far the biggest change to the Affordable Care Act came from the Obama administration when health Secretary Kathleen Sebilius announced that they were shelving the CLASS Act.

The CLASS Act got little coverage in the media, but it was a big deal– basically a public option for long term care coverage that would provide a cash benefit to help individuals pay for rehab for serious injuries, nursing homes, and home caregivers. The program would have been voluntary, but studies done by the Department of Health determined that there was no way to successfully implement a voluntary program. Only the people most likely to need expensive long term care would sign up, and the program would quickly run out of money.

[For a more detailed explanation of the CLASS Act and why it was suspended, check out our brief primer from last fall.]

How the Affordable Care Act has already changed our healthcare system

Even though the really big changes won’t come for another almost two years, the ACA has already had a major and lasting impact on our health care system. Here’s what the new law has done so far:

2.5 million young adults have gained coverage
Under the new law, children can stay on their parents’ insurance until they turn 26, and apparently millions of people are taking advantage of this change. As you can see in the graph, other age groups saw their coverage numbers decrease slightly over the same time period, thanks to a lousy economy and rising health care costs. Young adults were the only ones to buck the trend, meaning that their increase in coverage is a direct result of health reform. 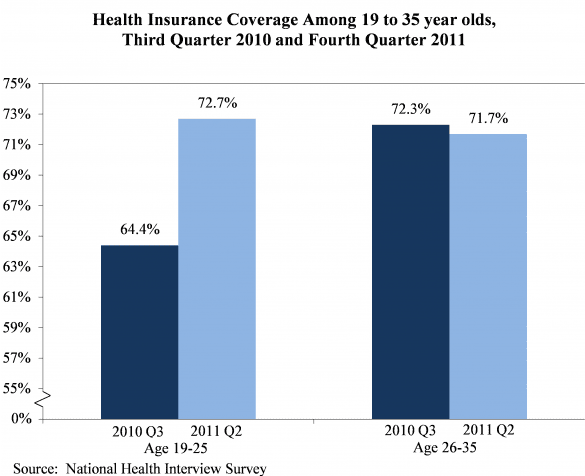 New rules have led to lower premiums
The Affordable Care Act requires insurance plans to spend at least 80% or 85% of their premiums (depending on the type of plan) on medical costs. The Government Accountability Office interviewed insurance companies and regulators about how the new requirement was affecting them:

“According to GAO, some insurers are decreasing premiums or leaving their rates unchanged in order to comply with the MLR requirements. Three companies told GAO that premiums will either fall next year or increase by a smaller amount than they would have without the MLR.”

According to the Department of Health and Human Services, the average Medicare beneficiary has saved $635 on prescription drugs since the law was enacted.

Delivery System Reform
One of the most ambitious goals of the new law was to begin shifting our health care system away from “fee-for-service”– in which doctors and hospitals get paid for every treatment they perform– a system that pushes doctors to provide as much care as possible regardless of whether it helps.

The new law contains a bunch of trial programs where, instead of getting paid for every service, they would get a flat fee, with incentives to improve the quality of care. For example, the law encourages providers to form “Accountable Care Organizations”:

The hope was to get health-care providers to band together and accept a flat fee for all the care provided to a set population of Medicare patients. That way, different providers would have an incentive to coordinate the care a given patient was getting by different specialists. Currently, individual patients can be treated by many different doctors who aren’t full aware of what the others are doing, much less working in close cooperation with them.

Health care experts say that even if the Supreme Court strikes down the new health law, these payment reforms are here to stay:

“As ‘death to Obamacare’ gets the headlines and the fate of the nation’s uninsured and most vulnerable hangs in the balance, the controversial law has already transformed the health care industry — and left most health care companies more profitable to boot. Health insurance companies, hospitals and the rest of the health care system already have made deep changes to the way they operate: adding new consumer protections to health plans, altering the way medical providers get paid and beginning to work closer together to improve health and save money. Experts say the push by President Barack Obama’s health care reform has created an unstoppable momentum. While the court could very well kill the Act’s most ambitious piece –Obama’s aim to insure the roughly 30 million Americans who have no health insurance — but they wouldn’t undo health care reform’s other goals: modernizing the health care system and extracting more value from the U.S. health care dollar.”

[For more on how these delivery system changes are reshaping American health care we highly recommend checking out Sarah Kliff’s article, “Health Reform at 2: Why American health care will never be the same” on The Washington Post site and Jeffrey Young’s article, “On Health Care, Supreme Court Essentially Powerless to Kill Many of Obama’s Big Changes” on Huffington Post.]

What to expect in the next year

Right off the bat, next week the Supreme Court will hear oral arguments on the constitutionality of health reform, and they’re expected to make a decision this summer. NPR explains what would happen if the justices rule against reform:

Very few people think the court will strike down the entire law. In the unlikely event it does, that would be it. Congress would basically have to start over from scratch.

If the Supreme Court were to find a piece unconstitutional, the most likely thing would be the individual mandate — the requirement for most Americans to either have insurance or pay a fine starting in the year 2014.

Now if that happened, the court might also invalidate just the mandate, or it might also strike down a couple of other pieces that many people — including the Obama administration — argue are “inextricably linked” to that mandate. That includes the requirement that insurance companies sell policies to people with pre-existing health conditions. Insurance companies say that without the requirement for everyone to participate, they will go broke if they have to sell policies to sick people.

And in strictly legal terms, Congress does not have to act in the wake of a Supreme Court decision. But often Supreme Court decisions end up prompting Congress to do something, either by necessity to fix a law that ends up with a big hole in it, or because the court makes a legal decision that’s so out of line with public opinion that Congress feels it has to act.

And then of course, there’s a presidential election in November. We don’t know who Republicans will nominate, but all of the remaining candidates have promised to repeal health reform if elected. On the other hand, it’s a little unclear whether a Republican president could actually do that.

In any case, next year will be crucial for the future of health reform.

Next post: Health reform in the Supreme Court, Part 1: When is a tax not a tax?

Previous post: Non-story of the week: The cost of health reform