Warning: Use of undefined constant wp_cumulus_widget - assumed 'wp_cumulus_widget' (this will throw an Error in a future version of PHP) in /home/customer/www/whatifpost.com/public_html/wp-content/plugins/wp-cumulus/wp-cumulus.php on line 375
 Health reform’s new weapon to fight obesity: menu labeling
≡ Menu 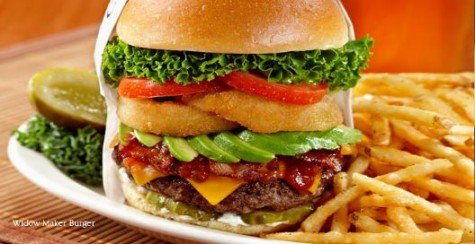 Time for a pop quiz: which do you think has more calories–

Let’s try again, double or nothing.  This one comes from Ezra Klein, at the Washington Post:

Let’s say you take your family to Claim Jumper [a Gold Rush themed restaurant chain] for a delicious dinner. You’re trying to eat a bit better lately, so you’d like to make a relatively low-calorie dining choice. Should you order the spicy jambalaya, the “widow maker” burger, the cobb salad, the whiskey-apple glazed chicken, or the homemade beef stew in a bread bowl?

Don’t worry if you got it wrong- even professional nutritionists can’t accurately estimate calorie counts based on menus.  Mary Story is a professor at the University of Minnesota and director of the Robert Wood Johnson Foundation Healthy Eating Research program.  She says:

“I personally try not to eat out. It’s so easy to gain weight, and we have no idea how many calories are in the food we are eating,” she said. “I’m a registered dietician. I’ve been working in nutrition for 25 years. If anyone should be able to [gauge calorie counts] I should. But I can’t. You have no idea what’s in the food.”

Which is why, as part of the new health reform law, starting next year restaurants with more than 20 locations will have to post calorie counts on their menus.  The hope is that arming consumers with accurate nutritional info when they eat out (and these days, nearly half the money we spend on food is on restaurants and takeout) will help fight America’s obesity epidemic.

The United States is now the fattest country on Earth, according to the Organisation for Economic Co-operation and Development. Two-thirds of adults and one third of children are overweight or obese. Obesity-related disease and conditions accounted for about $147 billion of U.S. medical expenses in 2008. The Partnership for Prevention has predicted that those costs will more than double, to around $344 billion within a decade if present trends continue. Obesity-linked conditions contribute to rising Medicare spending, too. Thin 65-year-olds cost Medicare 15 to 40 percent less during the rest of their lives than their plumper peers, according to an Academy Health report.

Does posting calories in menus work?
So far there have been two studies looking at calorie intakes in New York City, which passed its own menu labeling law back in 2008.

The first study, published in the journal Health Affairs, looked at the effect of calorie labeling only in low-income areas.  Using Newark (where there’s no calorie labeling) as a control group, researchers conducted interviews and checked receipts to see how ordering patterns changed.  They found that the calorie labeling law had no effect on meals purchased in poor neighborhoods.

A second study done by the New York City health department found slightly more positive results.  Researchers looked at the number of calories purchased at 13 chains citywide, not just in low income neighborhoods.  They found little change either way at most of them (and just over half the customers even noticed the calorie counts on the menu), but at four chains- Au Bon Pain, KFC, McDonald’s and Starbucks- customers did order fewer calories after the menu-labeling law.

The difference in populations– only low income neighborhoods in the first study vs. the entire city in the second– might explain the discrepancies:

“We looked at a population that’s much more price sensitive, so calorie information could have taken a backseat to pricing in our group,” said Brian Elbel, author of the earlier study and an assistant professor of medicine and health policy at NYU School of Medicine.

Since obesity rates tend to be higher in these neighborhoods, Dr. Elbel added, “this is where we would have liked to see an impact most.”

Health officials also found that the number of calories purchased per person at Subways around the city actually went up after calorie labeling.  The likely explanation: a continuing $5 promotional special on foot-long sandwiches that has tripled demand for them.

It appears that calorie info on menus is helping consumers reduce their calorie intake, but price is still a far bigger factor in food choices.  This is particularly true in poor neighborhoods, which unfortunately have the highest obesity rates. (And we should point out that the obesity epidemic has roughly coincided with a drop in the price of unhealthy foods like sodas, butter, while the cost of fruits and vegetables has shot up. For more info, check out our earlier post.)

Not just calories
Calorie information doesn’t help much if you don’t know how many calories you should be eating.  Also, just as important as the number of calories is what else is in your food- things like fat, sodium, cholesterol, and processed sugar.   The KFC Double Down that we mentioned earlier might have fewer calories than other fast food options, but it has way more fat, sodium, and cholesterol per calorie.

There are other issues too, like where on the menu the calorie counts will be published or what even counts as a menu.  How all this will work in practice is up to the FDA, which under the new law has until March to write up the specific guidelines for restaurants.  They’ve just released a draft proposal, which, according to NYU nutrition and public health professor Marion Nestle, fixes a number of problems she observed when New York started menu labeling.  (By the way, if you’re a restaurant professional with suggestions for the new rules, the FDA is currently seeking public comments.)

Not just restaurants?
Another big question is what will be considered a restaurant under the new law.  From the Wall Street Journal:

In preliminary guidelines released last week, the Food and Drug Administration said the scope of the law stretches beyond restaurants to encompass airlines, trains, grocery-store food courts, movie theaters and convenience stores that qualify as chains. Within grocery stores, the agency said, it is considering including salad bars, store bakeries, pizza bars and delicatessens. Stadiums aren’t listed since they aren’t chains.

Some grocery stores oppose the new regulations and airlines that don’t currently offer printed menus for in-flight meals are confused about how they would comply with the new law.

But in the end, we agree with the assessment of Lou Sheetz, executive vice president of the Sheetz convenience store chain:

“Everybody’s going to be a little bit better informed, and that’s a good thing.”