Warning: Use of undefined constant wp_cumulus_widget - assumed 'wp_cumulus_widget' (this will throw an Error in a future version of PHP) in /home/customer/www/whatifpost.com/public_html/wp-content/plugins/wp-cumulus/wp-cumulus.php on line 375
 Health reform in the Supreme Court: Why one word could determine the fate of health reform
≡ Menu

Health reform in the Supreme Court: Why one word could determine the fate of health reform 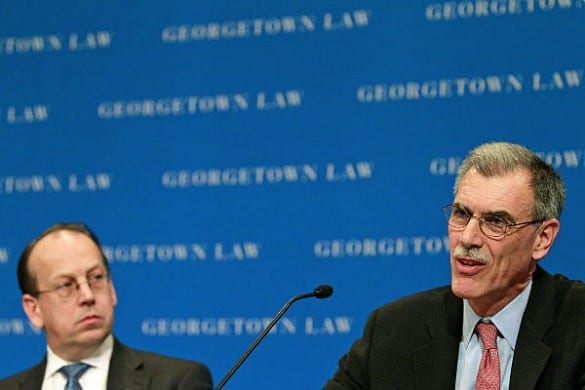 Paul Clement (left), the lawyer who argued against the individual mandate, and Solicitor General Donald Verrilli (right), who defended it

When the government defended the individual mandate before the Supreme Court, it cited two distinct powers Congress has under the Constitution:

Our earlier coverage of the mandate hearing (here and here) looked at the arguments dealing with the first power– the question of whether Congress can make people purchase insurance in order to regulate the healthcare market. But even if the Court rules that Congress can’t regulate commerce by making people buy insurance, they could still uphold the mandate if they decide it counts as a tax.

First, remember that the mandate says two things: (1) You have to have health coverage, and (2) if you don’t, you have to pay a tax penalty of $695 or 2.5% of your income (whichever is higher). Now, even the lawyers challenging the law admit that it’s totally constitutional for Congress to tax people without health coverage. Their argument is that the mandate doesn’t count as a tax, because Congress didn’t call it a “tax”– they called it a “penalty.”

In other words, health coverage for 30 million people might be struck down because Congress didn’t use the right word to describe it.

Is the mandate a tax?

The rules for the taxing power are well settled since the New Deal. The tax (1) must promote the general welfare, (2) must raise revenue; and (3) and it must not be a criminal penalty in disguise. The individual mandate passes this test with flying colors.

However, some people, like Justice Ginsburg for example, have argued that the mandate doesn’t pass the revenue test, because “if it’s successful nobody will pay the penalty and there will be no revenue to raise.”

Balkin points out that Ginsburg  is wrong for two reasons:

[1] That argument proves too much– it would also apply to taxes on contraband, drugs and guns, which the Court has previously upheld […] The mandate was estimated to raise some 4 billion dollars in revenue. In earlier cases, involving taxes on guns and drugs, the Court found that 500 dollars was sufficient.

[2] But there’s an even more important response to Ginsburg’s concern. That’s not the way the individual mandate was actually designed. The penalty was not set to ensure total compliance. It was not set to be equivalent to the most expensive health care premium available, but only to the average amount of health care premiums calculated nationally. That means that Congress expected that some people would rather pay the penalty. Congress knew it wouldn’t get 100 percent compliance, and the bill was not intended to ensure 100 percent compliance. This is like a tax on pollution, which allows some people to continue to pollute if it is worth it to them to pay the tax.

If it’s really a tax, why did Congress call it a penalty in the law?

Several of the Justices asked why, if the mandate is in fact a tax, Congress didn’t just call it that and avoid any question of whether it’s constitutional.

The answer, of course, is politics. President Obama and the Democrats were worried about Republicans attacking the mandate as a tax increase, so they went out of their way to call it a penalty instead. You can see how well that worked:

Since politicians will always avoid the t-word whenever possible, it really shouldn’t matter what Congress called it in the bill. What matters is whether the mandate fits the definition of a tax (which, as you can see from the ad, even Republicans admit) and whether Congress intended to use its taxing power under the constitution.

Solicitor General Donald Verrilli, in one of his better answers, argued that Congress did exercise its taxing power:

“On the — December 23rd, a point of constitutional order was called to, in fact, with respect to this law. The floor sponsor, Senator Baucus, defended it as an exercise of the taxing power. In his response to the point of order, the Senate voted 60 to 39 on that proposition.

The legislative history is replete with members of Congress explaining that this law is constitutional as an exercise of the taxing power. It was attacked as a tax by its opponents. So I don’t think this is a situation where you can say that Congress was avoiding any mention of the tax power.

What will the Court decide?

As always, it’s hard to say for sure based on the justices’ questions. Still, it’s incredibly disturbing that the entire 2,700 page health reform bill could fall based on a single word choice. Jonathan Cohn of The New Republic probably put it best:

Next post: Health Reform in the Supreme Court: The entire series