Warning: Use of undefined constant wp_cumulus_widget - assumed 'wp_cumulus_widget' (this will throw an Error in a future version of PHP) in /home/customer/www/whatifpost.com/public_html/wp-content/plugins/wp-cumulus/wp-cumulus.php on line 375
 Health reform in the Supreme Court Part 3: If the mandate falls, will the rest of the law go with it?
≡ Menu

Health reform in the Supreme Court Part 3: If the mandate falls, will the rest of the law go with it? 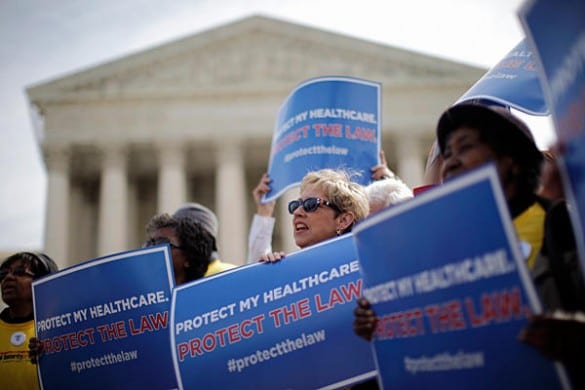 In Part 3 of the Supreme Court health reform hearings, the justices looked at an important What If (see what we did there?): What if they were to rule against the individual mandate? Should they only strike down the mandate or should they throw out other parts of the law with it?

Going into the hearing, most legal experts assumed that even if the Court ruled against the mandate, the rest of the law would stand. But by the end, it sounded like conservative  justices were at least considering striking down the entire Affordable Care Act– an extreme move, to say the least.

The question of severability

Often Congress will include a “severability clause” in major legislation, saying that if any part of the law is struck down, the rest should stand. Unfortunately, the ACA didn’t include such a clause, leaving it up to the courts to guess what Congress would have wanted to happen without the mandate.

Normally it wouldn’t be much of an issue– if Congress doesn’t say one way or another, the courts try to leave as much of the law intact as possible. Lyle Denniston of Bloomberg’s SCOTUSblog explains why:

The theory behind “severability” is one of judicial restraint: out of respect for Congress and its constitutional role as the country’s national legislator, a court that finds it must strike down something Congress has enacted is supposed to nullify no more of that law than is really necessary.

However, there are rare occasions when a provision can’t be severed from the rest of a law. To determine if an entire law should be struck down, courts use a two-part test:

If the answer to those questions are yes, or if the answers are unclear, the court will allow the rest of the law to stand. For example, a Republican-appointed lower court judge, Henry Hudson, wrote in his decision against the mandate:

“It would be virtually impossible within the present record to determine whether Congress would have passed this bill, encompassing a wide variety of topics related and unrelated to health care, without Section 1501 [the individual mandate]…Therefore, this Court will hew closely to the time-honored rule to sever with circumspection, severing any ‘problematic portions while leaving the remainder intact.’”

What each side argued

The Challengers: Strike down the entire law

Paul Clement, lawyer for the challengers, argued that without the mandate, the rest of the law can’t function:

What makes this different is that the provisions that have constitutional difficulties or are tied at the hip to those provisions that have the constitutional difficulty are the very heart of this Act. And then if you look at how they are textually interconnected to the exchanges, which are then connected to the tax credits, which are also connected to the employer mandates, which is also connected to some of the revenue offsets, which is also connected to Medicaid, if you follow that through what you end up with at the end of that process is just sort of a hollow shell. And at that point I think there is a strong argument for not — I mean, you can’t possibly think that Congress would have passed that hollow shell without the heart of the Act.

Calling the individual mandate the “heart of the Act” is a stretch– in fact, all of the provisions he mentions as being connected to the mandate would still work without it.

The Government: Leave most of the law

Deputy Solicitor General Edwin Kneedler argued that if the mandate was struck down, the Court should remove only two other provisions. The government says that the “guaranteed issue” and “community rating” provisions– which would prohibit insurers from denying coverage or charging higher premiums to people with pre-existing conditions– only work if there’s a mandate. Jonathan Cohn, writing for The New Republic, explains:

The logic here is that the mandate works in tandem with these provisions: If you’re going to stop insurers from discriminating against the sick, you have to make sure everybody gets health insurance. Otherwise, healthy people won’t buy coverage until they need it, destroying the actuarial balance that allows insurers to operate. The logic is correct. When New Jersey tried reform without a mandate, for example, healthy people fled the individual market, causing premiums to rise and, eventually, causing even more healthy people to flee.

The Court-appointed lawyer: Strike only the mandate

Since both the challengers and the government argued that at least parts of the law should fall if the mandate is struck down, the Court appointed a lawyer, H. Bartow Farr, to argue that the entire law could still stand.

Farr stated that even without the mandate, the guaranteed issue and community rating provisions would help millions of people with pre-existing conditions gain affordable coverage. And unlike New Jersey’s law, the Affordable Care Act contains other mechanisms for stabilizing the insurance pool.

For example, the law provides generous subsidies to help low income and middle class families and individuals pay for insurance. The law also authorizes annual enrollment periods, meaning people can’t just buy insurance when they show up at the hospital– they’d only be able to sign up once a year. Farr argues that these incentives, and others, will encourage healthy people to buy insurance, and thus keep premiums from spiraling out of control.

The nonpartisan Congressional Budget Office estimates that without the mandate, health reform would:

On the other hand, since fewer people would be signing up for Medicaid or taking advantage of insurance subsidies, the government would save an estimated $282 billion over ten years.

Clearly without the mandate there are some significant differences. But the numbers also show that the rest of the law would still function, just less efficiently.

(We should also point out that some health care experts, like Princeton University’s Paul Starr disagree with the CBO, because it “assumes substantial compliance with a mandate that has no enforcement behind it.” In other words, removing the mandate won’t matter all that much, because many people would simply ignore it anyways.)

What will the Supreme Court rule?

Really only one thing was clear after the hearing: the justices have no idea what Congress intended to keep if the mandate fell.

This should mean that if the Court rules against the mandate, it will do what it usually does, and what every other lower court did (with the exception of one very conservative judge in Florida, who was overturned on appeal): leave the rest of the law intact. Congress can then decide if they want to change it.

What the Supreme Court will actually rule is another thing. As NPR’s Nina Totenberg put it:

“Every time the court observers say the court would never go that far, it would never strike down the law — think again. This court is dramatically more conservative than it has been in many, many decades. It is quite prepared, quite capable of going farther than people expected.”

Next post: Health reform in the Supreme Court, Part 4: The Medicaid expansion