Warning: Use of undefined constant wp_cumulus_widget - assumed 'wp_cumulus_widget' (this will throw an Error in a future version of PHP) in /home/customer/www/whatifpost.com/public_html/wp-content/plugins/wp-cumulus/wp-cumulus.php on line 375
 Health Reform and the Enthusiasm Gap
≡ Menu

Health Reform and the Enthusiasm Gap 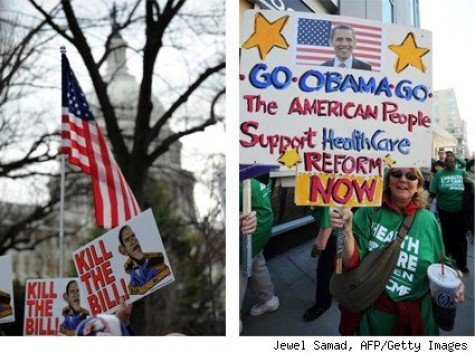 With the midterm elections coming up in just a few weeks, there’s been a lot of talk about an “enthusiasm gap” between the two parties.  Polls have been showing that Republicans are fired up about the election and much more likely to turn out at the polls in November.

Nate Silver, a statistician who blogs for FiveThirtyEight.com, says that the gap doesn’t seem to be because Democrats are dissatisfied or complacent- if anything Democrats are slightly more enthusiastic than normal for a midterm election.  Their problem, he says, is that Republicans are unusually excited:

Gallup periodically asks a question about whether voters are more enthusiastic than usual about voting in the midterms. When they did so in March, shortly after passage of the health care bill, 57 percent of Democrats said they were more excited than usual about voting in the November elections. This was, in fact, the highest figure that Gallup had ever recorded among Democrats in a midterm year (they began tracking the question in 1994). The problem for Democrats? Some 69 percent of Republicans also answered the question affirmatively. As I wrote at the time, “if the Democrats’ total was record-breaking, Republicans just blew the competition away in [Olympic sprinter] Usain Bolt-type fashion.”

Voters have calmed down a bit since the passage of health reform, but the most recent Gallup poll back in June still showed slightly excited Dems and incredibly excited Republicans compared to other recent midterms:

Following the money
Silver points out that also in terms of fundraising, Democrats don’t seem to be particularly depressed.  As of July 15 they actually received more money in individual donations than they did in 2008.

The Democrats’ fundraising problem is corporate and un-named money coming in from outside groups.  The Supreme Court’s recent ruling in the Citizens United case eased restrictions on corporate spending, and right-leaning groups have taken advantage of the new rules:

In the last week, Republican-leaning groups outspent their Democratic  counterparts on television by more than seven to one on Senate races and nearly four to one on House races across the country, according to data from the Campaign Media Analysis Group, which tracks political advertising. The gap shows few signs of abating, even with the midterm election season in full swing.

It’s getting worse as the election gets closer.  The Wall Street Journal reports that an alliance of Republican groups is launching a $50 million advertising blitz this week “representing the biggest spending blitz ever by such groups in a congressional election campaign.”  The groups involved were all formed in the wake of the Citizen’s United ruling.

Much of this money seems to be coming from health insurance companies hoping to scale back regulations in the new health care law (but thanks to the Supreme Court decision, the groups don’t have to disclose where this cash is coming from).   Just looking at traditional fundraising though, the L.A. Times reports that insurers have given three times as much money to Republican law makers and political action committees as they have to Democrats.  Compare that to 2009, when they donated money in roughly equal amounts to both parties.  And again, that doesn’t even count the money going towards these shady new outside groups.

Issues behind the gap
And so while the stories of depressed Democratic voters are probably exaggerated, thanks to an unusual amount of Republican interest (and Republican candidates armed with unprecedented amounts of corporate cash), Democrats are still facing the possibility of major losses in the November elections.

It’s worth looking at where the Republican interest is coming from.  The big issue, of course, is the economy.  The non partisan Kaiser Family Foundation (KFF), asked likely voters what one issue would be most important to their vote: unsurprisingly 38% said the economy and jobs, while only 10% said health care reform.

“Health reform has become like World War One, with fixed lines not likely to move much any time soon. Democrats have a good case to make with voters because so many of the major provisions of the law are popular with the public, especially the early deliverables being rolled out now, although their message is muted by confusion about the law which our polls show has been rising.

But Republicans have weapons too because the requirement that people buy insurance remains unpopular even though it doesn’t take effect for over three years and the law can be used as a lightning rod for voter discontent with Washington. The overall result is the rough stalemate we see on health reform in the polls with the public about evenly split on the law along traditional partisan lines.

The problem for Democrats in the upcoming elections is again intensity- many of the people who do support the new law aren’t exactly thrilled by it, while many who oppose reform see the new law as the end of the world.

Ultimately the public verdict on the law will be based much more on people’s experiences with it and the experiences of their families and friends as implementation slowly unfolds, not the political argument and spin we see today surrounding the midterm election.

Still, looking at what the law is expected to do, the reactions from both sides seem a little, well…  strange.  Based on the history of health reform and what’s actually in the law we’d expect Republicans to be way less afraid of it, and Democrats to be much more supportive.  We’ll look at what’s going on there in our next post.

Next post: Why are Republicans so upset by health reform?