Warning: Use of undefined constant wp_cumulus_widget - assumed 'wp_cumulus_widget' (this will throw an Error in a future version of PHP) in /home/customer/www/whatifpost.com/public_html/wp-content/plugins/wp-cumulus/wp-cumulus.php on line 375
 Health reform and jobs
≡ Menu

If you watched even twenty minutes of the House health reform repeal debate on CSPAN last week, you probably heard the phrase “job killing” at least a dozen times.  Republicans even wrote it into the name of the bill, which is officially titled “Repeal the Job-Killing Health Care Law Act.” But is it true?  Will the Affordable Care Act cost American jobs?

A recent report by House Republican leaders says “independent analyses have determined that the health care law will cause significant job losses for the U.S. economy.” Specifically, 650,000 lost jobs. They cite the Congressional Budget Office as the source of the number, which is interesting for a couple reasons:

What the CBO actually said is that the impact of the health care law on supply and demand for labor would be small. Most of it would come from people who no longer have to work, or can downshift to less demanding employment, because insurance will be available outside the job.

“The legislation, on net, will reduce the amount of labor used in the economy by a small amount– roughly half a percent– primarily by reducing the amount of labor that workers choose to supply,” budget office number crunchers said in a report from last year.

In other words, workers who are ready to retire, have children to watch, or are caring for elderly parents can now choose to work less and know that they will still have access to health care.  That will reduce the amount of labor in the economy– NOT employers cutting jobs.

Meanwhile, how did they Republicans get the 650,000 jobs  lost number? There are currently about 131 million jobs in the economy.  Republicans just multiplied that by 1/2%, which equals 650,000.  But tossing that number around makes no sense, according to economists interviewed by the Associated Press:

The law “reduces the amount of labor supplied, but it’s not reducing the ability of people to find jobs, which is what the job-killing slogan is intended to convey,” said economist Paul Van de Water of the Center on Budget and Policy Priorities. The center advocates for low-income people, and supports the health care law.

Another study cited by Republicans, from the National Federation of Independent Businesses (NFIB) said that reform would lead to the elimination of 1.6 million jobs, 66% of those from small business.  The Pulitzer Prize winning website Politifact looked into this claim and found:

The problem with this study is that it isn’t based on the law that passed. It was published on Jan. 26, 2009, before a finalized House or Senate bill had even been proposed.

In the NFIB study, “Small Business Effects of a National Employer Healthcare Mandate,” the authors made hypothetical assumptions based on what they thought the law might include. Specifically, the study assumed that all companies would be required to offer private health insurance to their employees, and that the employers would have to pay for at least half of the cost of the insurance premiums.

But the report’s assumptions don’t match up with the final version of the health care law. The law actually exempts companies with 50 or fewer workers from any mandate, so many of the small firms “most adversely affected” in the NFIB study are not required to offer insurance.

According to the study, firms with 19 or fewer jobs accounted for 467,182 of the 1.6 million job losses. Those companies would be exempt from the mandate, so the 1.6 million figure is at least inflated by 467,182. The next category was firms with 20 to 99 employees, estimated to shed 420,600 jobs as a result of a hypothetical employer mandate. Presumably a good percentage of those are companies with 50 or fewer employees, and again, are exempt from the health care law.

There seems to be no evidence that health reform is a “job killer.” But repealing reform might be.  Harvard economist David Cutler, who worked as a senior health care advisor to Barack Obama looked at the actual new law and estimates that repealing reform would cost jobs.  He cites several studies which show that high health insurance costs and employment are negatively related.  In other words, if employers are spending a higher percentage on health care reform, they can’t use that money to hire new workers or retain existing ones, so unemployment goes up.  Cutler’s analysis found that: 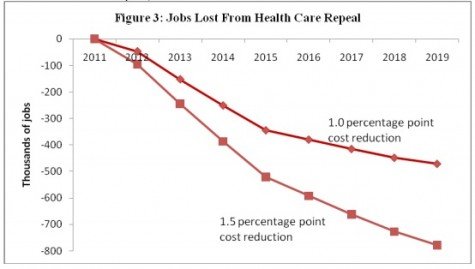 In the six months after the law was signed in March, UnitedHealth Group Inc., the country’s largest insurer, added 75,000 new customers who work for companies with fewer than 50 employees. The Minnesota company called the increase notable but declined to reveal further details. […]

Blue Cross Blue Shield of Kansas City, the largest insurer in the Kansas City, Mo., area, is reporting a 58% jump in the number of small businesses buying insurance since April, the first full month after the legislation was signed into law. […] Rowe said that 38% of the businesses it is signing up had not offered health benefits before.

“We certainly did not expect to see this in this economy,” said Gary Claxton, who oversees an annual survey of employer health plans for the nonprofit Kaiser Family Foundation. “It’s surprising.”

Even the Wall Street Journal’s economics editor recently wrote that business owners should oppose repeal because:

That’s right: the notoriously conservative Wall Street Journal editorial page is saying that the new health law will be good for business!  If Republicans are serious about jobs, maybe they’ll stop trying to push repeal.  Their new slogan can be: “Oppose the Job-Killing Repeal the Job-Killing New Health Care Law Act!”