Warning: Use of undefined constant wp_cumulus_widget - assumed 'wp_cumulus_widget' (this will throw an Error in a future version of PHP) in /home/customer/www/whatifpost.com/public_html/wp-content/plugins/wp-cumulus/wp-cumulus.php on line 375
 The Health of the Union 2015
≡ Menu 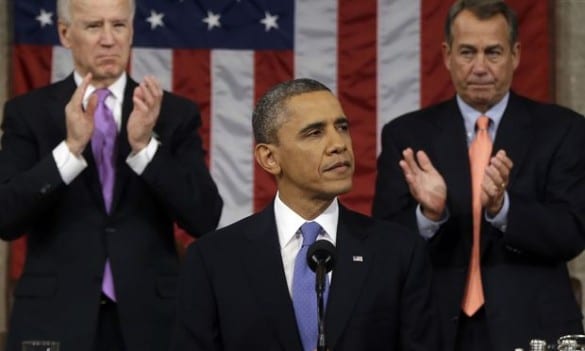 Compared to past President Obama’s past State of the Union addresses, this year’s was an unusual one for health care. The words “Affordable Care Act” weren’t spoken at all, and the only reference to the president’s signature law was a brief sentence mentioning the uninsured who gained coverage and the recent slowdown in the growth of healthcare costs. The omission of the ACA is especially odd considering that (1) so far the law has not just met, but exceeded its goals for expanding coverage and controlling costs; and (2) there’s another month left of open enrollment to buy coverage for 2015– something it seems like the president would want to mention.

On the other hand, a bunch of other health care issues did come up in the speech, including a couple that we haven’t really talked about before on this site. Here’s our annual look at health care in the State of the Union.

“And in the past year alone, about ten million uninsured Americans finally gained the security of health coverage.”

This was the only direct reference to the ACA, and it’s true– a study from The New England Journal of Medicine found that about 10.3 million previously uninsured adults gained coverage in 2014, while the Urban Institute’s Health Reform monitoring study put the number slightly higher, at 10.6 million. (By the way, these figures probably understate Obamacare’s coverage gains since they don’t include the 3 million young adults who got coverage by staying on their parents’ plans before 2014.)

And for even more evidence, a survey from Gallup shows the percentage of adults without insurance at its lowest level since they started counting back in 2008: 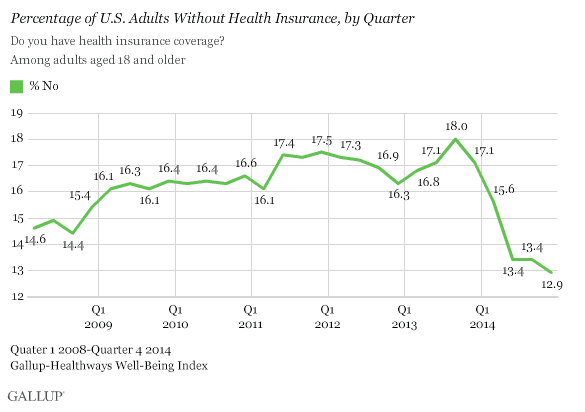 The president’s figure also leaves out the fact that millions more uninsured Americans would have coverage if every state adopted the ACA’s Medicaid expansion. A fantastic map from The New York Times shows what percentage of each county in the U.S. remains uninsured: the states with the highest numbers of uninsured are in the south and midwest, along with Texas, Florida, Pennsylvania, Maine, Idaho, and Montana– all states that opted not to expand Medicaid in 2014.

Pennsylvania is finally expanding its Medicaid program this year, but according to a study by the Kaiser Family Foundation, that still leaves nearly 4 million Americans who would be eligible in non-expansion states.

“At every step, we were told our goals were misguided or too ambitious; that we would crush jobs and explode deficits. Instead, we’ve seen the fastest economic growth in over a decade, our deficits cut by two-thirds, a stock market that has doubled, and health care inflation at its lowest rate in fifty years.”

“The latest estimates from the federal Centers for Medicare & Medicaid Services put health care spending at $2.8 trillion, or $8,915 per person, in 2012. That marked the fourth straight year, dating back to 2009, that the annual increase was less than 4 percent. Again, those are historic lows dating back to 1960.”

“Today, we’re the only advanced country on Earth that doesn’t guarantee paid sick leave or paid maternity leave to our workers. Forty-three million workers have no paid sick leave. Forty-three million. Think about that. And that forces too many parents to make the gut-wrenching choice between a paycheck and a sick kid at home. So I’ll be taking new action to help states adopt paid leave laws of their own. And since paid sick leave won where it was on the ballot last November, let’s put it to a vote right here in Washington. Send me a bill that gives every worker in America the opportunity to earn seven days of paid sick leave. It’s the right thing to do.”

Technically it’s true that the U.S. is the only advanced country that doesn’t provide paid sick leave. But if you want to get nitpicky, the website Factcheck.org points out that Canada and Japan don’t offer paid sick leave for short-term illness (like, say a five-day flu)– they only cover pay for long-term illnesses (like, say 50 days of cancer treatments).

On the other hand, we really are the only developed country that doesn’t guarantee paid maternity leave. A 2014 report from the United Nation’s International Labour Organization found: “Only two out of 185 countries and territories currently provide no statutory cash benefits during maternity leave.” Those two countries are the United States and Papua New Guinea.

“21st century businesses will rely on American science, technology, research and development. I want the country that eliminated polio and mapped the human genome to lead a new era of medicine — one that delivers the right treatment at the right time. In some patients with cystic fibrosis, this approach has reversed a disease once thought unstoppable. Tonight, I’m launching a new Precision Medicine Initiative to bring us closer to curing diseases like cancer and diabetes — and to give all of us access to the personalized information we need to keep ourselves and our families healthier.”

Precision medicine (also called “personalized medicine”) refers to medical treatments based on the specific biology of individual patients. Examples include using genetic tests to determine whether you should take extra precautions for certain illnesses and experimental new drugs tailored to your DNA. The downside of these types of personalized treatments is that, at least for now, they’re extremely expensive and time-consuming to develop. If you’re interested in learning more, the website Vox has an excellent explainer on precision medicine here.

“In West Africa, our troops, our scientists, our doctors, our nurses and healthcare workers are rolling back Ebola — saving countless lives and stopping the spread of disease. I couldn’t be prouder of them, and I thank this Congress for your bipartisan support of their efforts. But the job is not yet done — and the world needs to use this lesson to build a more effective global effort to prevent the spread of future pandemics, invest in smart development, and eradicate extreme poverty.”

Ebola does appear to be on the decline in West Africa: Mali was recently declared Ebola free, Guinea has reopened its schools, and the number of new cases in the three hardest hit countries– Liberia, Sierra Leone, and Guinea– are at their lowest levels since this summer. Meanwhile clinical trials have begun on Ebola vaccines. Tom Friedman, director of the Centers for Disease Control, says he’s confident the outbreak can be contained, provided “nothing unexpected happens.”

Friedman notes there is more work to be done to get the number of cases to zero, but health officials sound much more confident than they did back in October.

Yes, climate change is a health issue, which is one major reason why the EPA announced a plan to regulate carbon pollution back in June. At the time, critics claimed that the plan would do little to stop climate change, since other large polluters, like China, would never agree to limit their emissions. They were wrong:

The worry now is that the deal isn’t legally binding, so there’s a chance either country could back out. Still, President Obama makes it clear in the the speech that he does intend to move forward on limiting emissions.

“We still may not agree on a woman’s right to choose, but surely we can agree it’s a good thing that teen pregnancies and abortions are nearing all-time lows, and that every woman should have access to the health care she needs.”

According to the CDC, 2013 (the most recent year we have statistics for) had “the lowest number of teen births ever reported for the United States”– 10% lower than 2012, and 57% lower than 1970, the peak year for teen births. 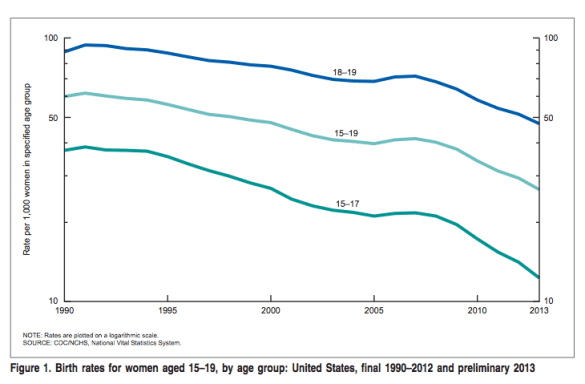 That said, America’s teen pregnancy rate is still much higher than other developed countries’: 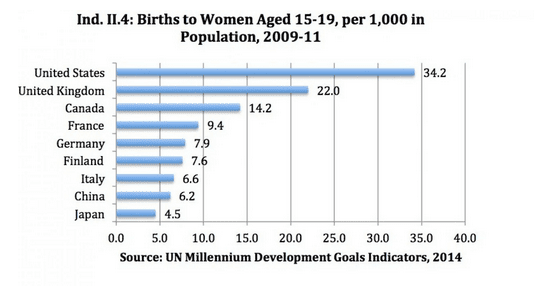 On abortion, President Obama is also correct: the Guttmacher Institute reports that in 2011 abortions were at their lowest level since 1973 (and we should note that 2011 was before many states passed new laws restricting access). 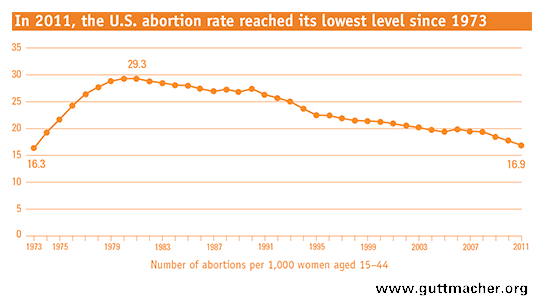 And finally, as we’ve pointed out before, the Affordable Care Act contains many provisions specifically meant to improve healthcare for women.

Next post: Republicans are changing how Congress calculates the cost of bills. Here’s why that matters.

Previous post: An Obamacare guide for filing your taxes