Warning: Use of undefined constant wp_cumulus_widget - assumed 'wp_cumulus_widget' (this will throw an Error in a future version of PHP) in /home/customer/www/whatifpost.com/public_html/wp-content/plugins/wp-cumulus/wp-cumulus.php on line 375
 Health care reform and veterans
≡ Menu 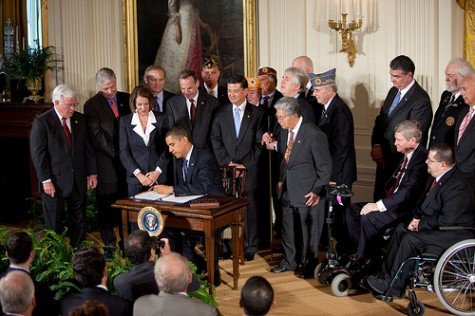 Obama’s plan for Veteran’s Health doesn’t have a fancy name (it’s mostly just an assortment of budget proposals), but according to Secretary of Veteran’s Affairs Eric Shinseki, there are two overarching goals:

The 2010 Budget
The reform plan for the VA actually began with President Obama’s 2010 federal budget, which raised total VA spending to $112.8 billion.  That was an increase of $15 billion, or 15% over the previous year.  It marked the largest dollar and percentage increase ever requested for the VA, and was actually $1.3 billion more than what even veterans service organizations had suggested.

The extra funding would allow the veterans health care system to cover an additional 266,000 Priority Group 8 veterans.  These are veterans with no service-related injuries and incomes above the VA’s previous threshold for coverage.  Income limits were put in place in 2003, when increased demand for service and smaller budgets under President Bush forced the VA to concentrate on “veterans with service connected conditions, special authority based on military service, low income, and those with special health care needs.”  A study released in 2007, found that 1 in 8 veterans under 65 has no insurance.

The new rules and funding in 2010 raised the maximum income level for eligibility in the VA health system by 10% (the actual dollar amount varies based on geographic area).

This Year
Obama’s requested budget for 2011 marks the second year of large funding increases for the VA.  The President has requested $125 billion, an 10% increase from last year, and the vast majority of the new discretionary spending will go to health care.  Here’s the plan for that money:

Expanding Coverage
It continues to gradually expand eligibility for the VA health system to new veterans.  This year an additional 99,000 vets would be eligible, and the hope is to provide access to 550,000 previously ineligible veterans by 2013.

Reducing Claims Backlog
The VA has an enormous backlog of claims for Veterans benefits.  Between 2000 and 2010 the number of claims has doubled to over 1.2 million.  President Obama’s budget proposal increases the funding for claims processing by $460 million, or 27– that money will go towards the hiring of 4,000 additional claims processors.  An additional $145 million in the budget would go towards developing a paperless claims processing system (one of the ideas for bringing the VA into the 21st century).  The ultimate goal of all this is to reduce the average disability claim’s processing time to 125 days.

Eliminating homelessness
According to the VA, on a typical night there are 131,000 homeless vets.  They represent every war and generation from the “Greatest Generation” of WWII to the latest generation of veterans from Iraq and Afghanistan.  Right now the VA operates the largest system of homeless medical treatment and assistance programs in the country.  The President’s proposal would increase funding for the VA’s homeless treatment programs by $800 million, to a total of $4.2 billion.

Working with the Department of Housing and Urban Development, the VA hopes to reduce the number of homeless veterans to 59,000 by 2012, and eventually eliminate homelessness among vets.

Targeting Mental Health, Preventing Suicides
Last year on What If Post, we reported that Army suicides had reached a 28-year high.  By the Army’s own estimate, 17% of soldiers returning from Iraq and Afghanistan suffered from Post-Traumatic Stress Disorder (PTSD), and some independent analysts have put the number even higher.  Last year, 20% of the patients seen in the VA’s health care facilities had a mental health diagnosis.  As we pointed out last year, these numbers probably underestimate the number of vets with PTSD, since:

The Department has already added an additional 6,000 mental health professionals since 2005, and the Presidents budget would provide an additional $410 million (an increase of 8.5%) for mental health spending.  The funding will allow for the VA to continue expanding its programs for PTSD, traumatic brain injuries, depression, substance abuse and other mental health problems.  It will also continue the VA’s suicide prevention program, which since 2007 has received 225,000 calls from veterans, active-duty personnel, and their families.

Reaching Rural Veterans
The VA is seeking $250 million to strengthen its programs for veterans living in rural areas.  A key part of this rural outreach is the VA’s “telehealth” program, which links patients and health care providers by telephone and internet.  This program already provides care for 35,000 veterans and allows for the daily monitoring of patients with chronic conditions who live in remote areas.

Women Veterans
The proposed budget increases the funding for gender-specific health care programs for women veterans.  Among the initiatives for female service members is increased training for providers, and a 24-hour call center for women veterans.

Next post: More on health care reform and veterans