Warning: Use of undefined constant wp_cumulus_widget - assumed 'wp_cumulus_widget' (this will throw an Error in a future version of PHP) in /home/customer/www/whatifpost.com/public_html/wp-content/plugins/wp-cumulus/wp-cumulus.php on line 375
 Harvard’s changes to its health plans have gotten a lot of attention, but for the wrong reasons
≡ Menu

Harvard’s changes to its health plans have gotten a lot of attention, but for the wrong reasons 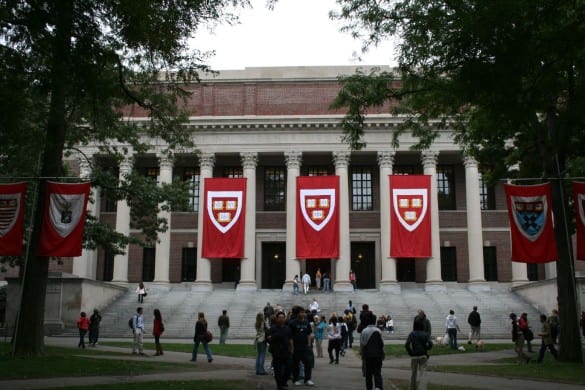 There was a piece in The New Yorker recently that looked at how psychological research shows that a headline not only determines how many people will read an article, it also “changes the way people read an article and remember it.” Headlines influence your mindset as you read, and if a headline is slightly misleading, reading the actual article may not be enough to correct that initial misconception. People tend to remember information that aligns with the headline and forget information that contradicts it.

The reaction to a recent New York Times article titled “Harvard Ideas on Healthcare, Hit Home Hard” is a perfect example. At first glance, the premise– professors are in an uproar over new deductibles and copays that are the result of policies championed by, well, Harvard professors– sounds almost satirical (we were reminded of The Onion headline, “Urban Planner Stuck in Traffic of Own Design”). Conservatives say it shows how the liberal elite will reject the new law the minute it applies to them. “Obamacare for thee and not for me,” wrote one conservative website.

However, if you read past the headline and first two paragraphs, you see that the article is really about something quite different:

The anger on campus remains focused on questions that are agitating many workplaces: How should the burden of health costs be shared by employers and employees? If employees have to bear more of the cost, will they skimp on medically necessary care, curtail the use of less valuable services, or both?

And what’s interesting about Harvard in this respect is buried in the second-to-last paragraph. The university structured its plan in an unusual way, with the hope that it can do both: reduce costs by encouraging employees to use fewer unnecessary services, while still ensuring they don’t have to skip care they actually need.

Why Harvard is changing its plan

We all know that healthcare in the United States is crazy expensive. The list of possible reasons for this is long and complicated, but in general they fall into two categories:

Fixing #2 is tricky for private insurers– they can negotiate for lower rates and cut out some providers who charge too much, but there’s a limit to what they can do. If an insurer’s network doesn’t cover certain hospitals or certain name brand drugs, it will struggle to attract customers– providers know this and charge rates accordingly. The government could step in and regulate the rates that providers and drug companies charge, but as the journalist Steven Brill has pointed out, in order to get Obamacare passed, Democrats negotiated deals with the healthcare industry that left rate regulation off the table.

And so, recent efforts to cut healthcare costs in the U.S. have focused almost exclusively on #1: reducing unnecessary care. For employers, that’s meant shifting more of the cost of care onto employees. The idea is that if employees have more “skin in the game” they’ll shop around for lower prices and avoid unnecessary tests and procedures.

Some employers, like Harvard, have avoided this trend… at least until now. This year, the university is introducing a new deductible ($250 for individuals, $750 for families); $20 copays for most doctor visits; and out-of-pocket limits of $1,500 for individuals and $4,500 for families.

According to Harvard’s healthcare enrollment guide for 2015, the university “must respond to the national trend of rising healthcare costs, including some driven by health care reform.” It provides a short list of ACA provisions that brought additional costs: extending coverage for children up to age 26; free preventive services; and, starting in 2018, a 40% tax on insurance benefits above certain thresholds, known as the “Cadillac tax.”

The first two ACA provisions mentioned took effect years ago, and nationally growth in the cost of healthcare is at its lowest level in years, so it’s been assumed that the Cadillac tax is the main culprit behind the university’s decision.

But is “liberal” Obamacare really to blame?

Conservatives of course think its hilarious that Harvard academics are flipping out over the effects of a policy championed by Harvard academics, but they’re ignoring some key details. First, the professors who pushed for the Cadillac tax are not the same professors now protesting the changes to the university’s health plan, so it’s not all that ironic. What is ironic (or at least wildly hypocritical) is that Republicans have been pushing for plans with even higher out-of-pocket costs.

Also, many conservative health economists have specifically supported the Cadillac tax (or something like it). Last summer, Avik Roy, a fellow at the Manhattan Institute and former health policy adviser to Mitt Romney, released a possible conservative replacement for Obamacare that not only keeps the Cadillac tax, but pushes it up a year. And in 2008, John McCain’s health plan would have eliminated the tax break on all health plans— effectively a more extreme version of the Cadillac tax.

But insurance expert Richard Mayhew points to something even more interesting: even Harvard’s most expensive plan is well below the threshold to trigger it. Unless health costs explode unexpectedly in coming years, they wouldn’t pay the Cadillac tax for at least another ten years. Writes Mayhew:

How many businesses institute unpopular human resources changes solely to avoid taxes half a generation or more into the future versus seeing immediate reductions in current expenditures?

My bet is Harvard was looking to minimize its health insurance costs, decided to offer a very rich but slightly less rich benefit package, and blame Obamacare and hope no one of any importance or influence does the math.

Another point of amusement in the media is that Harvard’s cloistered, ivory tower types are complaining that their “amazing insurance is getting slightly less generous,” when most Americans face far higher out-of-pocket costs. Just last week, USA Today published a lengthy story on how high deductibles are “crippling the middle class”:

The size of the average deductible more than doubled in eight years, from $584 to $1,217 for individual coverage. Add to this co-pays, co-insurance and the price of drugs or procedures not covered by plans — and it’s all too much for many Americans.

Holly Wilson of Denver, a communications company fraud investigator who has congestive heart failure and high blood pressure, recently went without her blood pressure pills for three months because she couldn’t afford them, given her $2,500 deductible. Her blood pressure shot so high, her doctor told her she risked a stroke.

And LaRita Jacobs of Seminole, Fla., who gets insurance through her husband’s job and has an annual family income of $70,000, says $7,500 a year in out-of-pocket costs kept her from dealing with an arthritis-related neck problem until it got so bad she couldn’t lift a fork. She’s now putting off shoulder surgery.

Compared to that, Harvard employees have it ridiculously easy. A chart from The Washington Post shows how the university’s new deductibles stack up compared to typical employer plans and the average silver plan on the Obamacare exchanges: 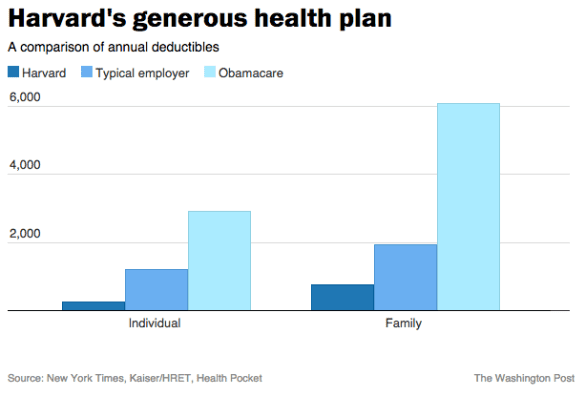 However, the people mocking Harvard’s faculty seem to have overlooked this part of the piece:

“None of us who protested was motivated by our own bottom line so much as by the principle,” Ms. Lewis said, expressing concern about the impact of the changes on lower-paid employees.

The professors quoted in the article have a point– the fact that other plans have more cost-sharing doesn’t make it a good idea. High out-of-pocket costs may dissuade people from getting unnecessary tests and procedures, but they hit those who really do require a lot of care the hardest. Professor of economics Jerry R. Green is absolutely right when he says in the piece, “It’s equivalent to taxing the sick.”

The professors are also correct that out-of-pocket costs have a disproportionate impact on those with lower incomes. The $250 individual deductible should be manageable for almost any income level, but if you’re a single parent making $30,000 a year and you or a child gets really sick, $4,500 in out-of-pocket costs annually (the new maximum on Harvard’s plan) could be a big problem. For a full professor, who makes $198,000 on average, that’s almost a rounding error.

Protesting faculty members don’t think this is enough protection, but the general principle of tying out-of-pocket costs to income is worth a closer look. If some cost-sharing is necessary to bring down healthcare costs, doing it on a sliding scale could avoid placing too heavy a burden on those who can least afford it.

In the USA Today article, Ezekiel Emanuel, a former health policy adviser to President Obama, says that rather than high deductibles we should aim for “smart deductibles.” Harvard’s tying cost-sharing to salary could be one model. Another one, suggested by Emanuel, would be high deductibles only for “discretionary services” like knee replacements– this could avoid the taxing the sick problem, although identifying what’s “discretionary” could be a challenge.

However– and here’s the real irony in all of this– we in the media have mostly ignored ideas for addressing the all too common problem of sick people struggling to pay their medical bills despite having coverage… yet poke fun at the ivory tower for being out of touch.

Next post: An Obamacare guide for filing your taxes

Previous post: What the single-payer movement can learn from Vermont