Warning: Use of undefined constant wp_cumulus_widget - assumed 'wp_cumulus_widget' (this will throw an Error in a future version of PHP) in /home/customer/www/whatifpost.com/public_html/wp-content/plugins/wp-cumulus/wp-cumulus.php on line 375
 Got questions about the ALS Ice Bucket Challenge? This might help.
≡ Menu

Got questions about the ALS Ice Bucket Challenge? This might help. 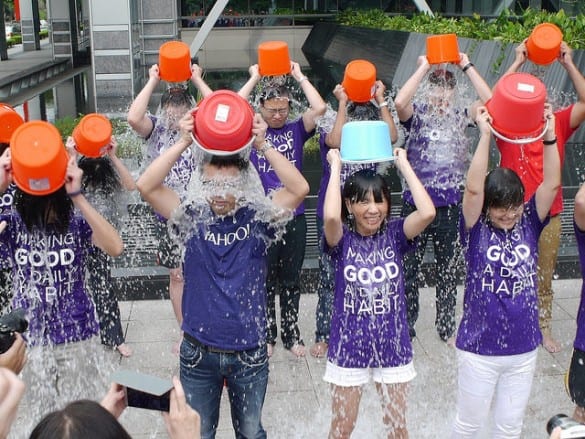 If you’re reading this you have access to the internet, which means by now you’ve seen (or at least heard about) videos of people dumping buckets of ice water on their heads to raise money and awareness about ALS. However, the videos tend to be short and don’t have much context, so if you’re curious for more information about ALS, how the challenge started, how well it’s working, and other issues that have been raised, read on.

ALS is short for “Amyotrophic Lateral Sclerosis,” also known as “Lou Gehrig’s Disease” in the U.S and “Motor Neurone Disease” in the U.K. The terminology can be a little confusing because ALS is actually one of several disorders that scientists refer to as motor neuron diseases, although it’s the most common. There are at least 12,000 people (and possibly as many as 30,000) living with ALS in the U.S., and an estimated 400,000 people have it worldwide.

It’s a “neurodegenerative” disease– specifically the neurons that control muscle movement begin to fail over time. The earliest symptom is often muscle weakness, which then spreads across the body– eventually patients become paralyzed, unable to initiate or control any voluntary movement. ALS is usually fatal within two to five years after symptoms start– usually from respiratory failure– although in very rare cases (physicist Stephen Hawking, for example) people have survived for decades with the disease.

In 5 – 10% of cases, ALS is inherited and has been linked to abnormalities in specific genes, but in most cases there is no known cause. There is no cure.

How did this whole ice bucket thing start?

It’s a little unclear exactly who did the first ice bucket challenge, but it emerged earlier this spring on social media in more or less it’s current form: someone videotapes themselves dumping ice on their head, challenges someone else, who has to do the same thing in 24 hours or donate money. Originally money was donated to the charity of a person’s choice– Chris Kennedy, a professional golfer in Florida, was the first to focus the challenge on ALS. But it really took off when Pete Frates, a former Boston College baseball player who was diagnosed with ALS in 2011, began posting about it on social media, inviting friends and celebrity athletes in the Boston sports community to participate.

How much money has the challenge raised?

As of today, the ALS Association (ALSA) reports that the organization has raised $79.7 million compared to $2.5 million for the same period last year.

Does it waste water?

A bunch of people have criticized the trend for wasting clean, fresh water, particularly in parts of the country like California that are struggling with a drought right now. If you figure that an average bucket holds about 4 or 5 gallons of water, and there are over 1.2 million ice bucket challenge videos, then that’s probably about 5 or 6 million gallons that have been used so far.

That might sound like a lot of wasted water, but consider that the average American household uses 320 gallons of water per day. The ice bucket challenge uses the same amount of water as 2 minutes in the shower, and keep in mind that people are only doing the ice bucket challenge once. If all 2.5 members of the average household participate, that amounts to about .01% of their annual water usage. It’s not nothing, but it’s close.

Another way to think about the ice bucket challenge’s water usage, is to compare it to how much water we use to produce food (often in drought susceptible areas, like California):

For 1/10th the amount of water that it takes to produce one egg, the ice bucket challenge has generated an average donation of more than $40 for ALS. Some have suggested that people should just donate the money without dumping the water, but that sort of misses the point that the “challenge” aspect has been the key to getting so many people involved.

Ok, maybe not everyone is doing it just once…

Are there other reasons to be critical of it?

Maybe. One point, made by the founder of the nonprofit Giving What We Can, is that there’s the problem of “funding cannibalism”– that is, if someone donates $100 to ALS (or really any charity), they’re less likely to donate to other causes:

Research from my own non-profit, which raises money for the most effective global poverty charities, has found that, for every $1 we raise, 50¢ would have been donated anyway […] Given our fundraising model, which asks for commitments much larger than the amount people typically donate, we have reason to think that this is a lower proportion than is typical for fundraising drives. So, because of the $3 million that the ALS Association has received [this was written early in the ice bucket campaign], I’d bet that much more than $1.5 million has been lost by other charities.

We’re a little hesitant to put too much stock in those exact numbers, because the data is all self-reported, and when asked, people tend to overestimate how much they typically give to charity. However, it is true that at least some of the money donated to any charity would go to some other worthy cause. Yet the other way of looking at Giving What We Can’s numbers– and something that’s especially true for faddish things like the ALS ice bucket challenge– is that a lot of that money would not have been donated anywhere.

John Green, an author who has raised over a million dollars for charities and recently vlogged about his experiences traveling to Ethiopia with the Gates Foundation, wrote this update to a post that was initially somewhat critical of the ice bucket challenge:

Tumblr user mockmewithgrace points out that it isn’t just a question of donating to X over Z; campaigns like the ice bucket challenge raise the total amount of money donated to charity; i.e., money that would otherwise be spent on beer instead gets donated to ALS research. This is a key point that I failed to consider above; I wrongly imagined charity as a kind of zero-sum game. And insofar as campaigns like this increase the total amount given to charity, they are I think unqualified successes.

On the other hand, there is a legitimate concern that a cause is raising money and awareness simply because it’s “a thing on the internet right now” is problematic.

ALS really is awful, there hasn’t been nearly enough money devoted to it in the past, and the ALS Association, to whom most of the money is going, is by all accounts a fantastic organization that has been ranked highly by charity watchdog groups, like Charity Navigator. However, not every viral internet fundraising and awareness campaign is aimed at such a worthy cause (for an example, see the Kony2012 campaign, which, while well-intentioned, may have done more harm than good).

So we just need to be careful. As Green wrote in his original post:

If our philanthropy is dictated only by what happens to bubble up to the surface of the Internet’s consciousness, we’re not making careful choices about how to distribute our limited resources.

Next post: Has Congress done anything to screw over ALS patients recently?

Previous post: What you should know about insurers’ proposed rates for next year