Warning: Use of undefined constant wp_cumulus_widget - assumed 'wp_cumulus_widget' (this will throw an Error in a future version of PHP) in /home/customer/www/whatifpost.com/public_html/wp-content/plugins/wp-cumulus/wp-cumulus.php on line 375
 Food Rules
≡ Menu

NPR Reporter: What if health care is overhauled and it doesn’t change the American diet in any way?

Prof. POLLAN: We’ll go broke. If we don’t get a handle on these health care costs, the new system or the old system, we’ll go broke. And that’s why I think that really food is the elephant in the room when we’re talking about health care.

-From an NPR interview with Michael Pollan, Author of Omnivore’s Dilemma, In Defense of Food, and Food Rules

Read enough about the health care crisis and eventually you’ll come across the term “cost drivers.”  Health care costs are clearly rising at an alarming rate, but what’s less clear is why- what is driving costs up?  Everyone has a theory.  Increased use of expensive, yet unproven or ineffective, medical technologies, consumers demanding more care, fee-for-service medicine (doctors getting paid for every procedure they do, regardless of whether or not it helps the patient), and the fear of malpractice lawsuits have all been explored.

What’s gotten less attention in the health care reform debate, is what Michael Pollan calls “the elephant in the room.”  More Americans are getting sick from chronic diseases, and we’re getting sick because we’re eating junk.

The High Cost of the American Diet
We’ve talked about obesity and health care reform before, but in case you missed it, here’s a quick review with some new information…

The leading cause of disease in the United States is now obesity.  Keep in mind that obesity is different from simply being a little overweight- it means being overweight to the point where there is a serious risk of health problems.  It’s based on a person’s body mass index (BMI)– a BMI over 30 is considered obese.  For a person of average height, that’s roughly 30 pounds over a healthy weight.

Since 1980, the number of obese Americans has skyrocketed.  The Centers for Disease Control and Prevention recently released data indicating that obesity rates have finally leveled off, but they’ve leveled off at extremely high levels.  A decade ago federal health officials set the goal that no more than 15% of people would be obese in 2010.  In fact, now almost 34% of American adults, and 17% of children are now obese.

How big a problem is it?  Scientists say that obesity is now a bigger threat than smoking– it causes more illness, and does as much or more to shorten healthy lifespans (smoking still kills more people every year though).  The author of one study, Roland Sturm, a senior economist at Rand Corp., says that obesity is like “aging 20 years” when measured by the onset of chronic medical problems.

But in the health care reform debate, which more than anything has centered around ways to control costs, it’s surprising how little attention the obesity epidemic has received.  In an editorial in the New York Times, Pollan cites some eye-opening statistics:

Not only are there more obese people, but the cost of treating each of them is higher.  It turns out that health care costs are greater for obese people that for smokers: 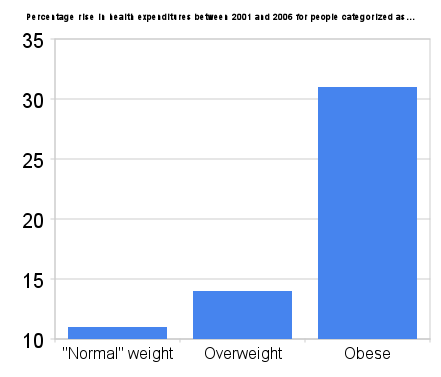 Even though obesity rates may be leveling off, the costs associated with the disease will continue to grow.  The longer that people are at unhealthy weight, the longer they’ll be at risk for chronic illness, like heart disease and diabetes.

Take diabetes for instance– it’s one of the most costly illnesses to our health care system, and 1 out of 10 health care dollars goes to treating it each year.  Type 2 diabetes is the most common form- it’s also preventable and the leading cause is obesity.  It used to be referred to “maturity onset diabetes” because doctors usually only saw it in patients over 50 years old; doctors are now starting to see it in children.

Even if obesity rates stay the same, over the next 25 years the number of Americans living with diabetes will nearly double to over 44 million people.  Meanwhile, spending on the disease will triple to $336 billion.

As Reed Tuckson of United Health Foundation put it:

“There is a tsunami of chronic preventable disease about to be unleashed into our medical-care system which is increasingly unaffordable.”

What to do?
Despite the lack of attention as a major cost driver, there are a few things in the health reform bills that would help combat obesity. Both the House and Senate bills would:

Still, these are relatively small steps.  Here are some ideas to deal with obesity by tackling a major source of the problem: our food.

1.  Look into reducing agricultural subsidies for unhealthy food
Now of course, what we eat is a personal choice- you can’t force someone to eat healthier, any more than you can force someone to stop smoking.   But the government does have a role to play in making it easier for us to eat healthier.  Shannon Brownlee, author of Overtreated, explains:

In the United States, the cheapest foods are often the unhealthiest, thanks in part to subsidies encouraging production of the very junk foods that contribute to obesity.  And the obesity epidemic actually began at around the same time as unhealthy foods got cheaper and healthier foods got more expesive. 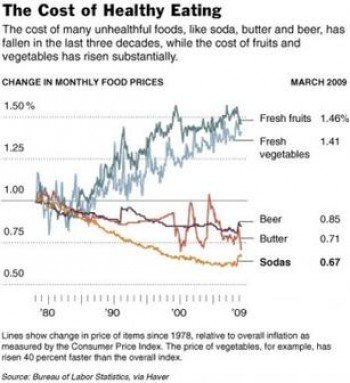 The most recent farm bill included $41.6 billion in subsidies for corn (think doritos and high fructose corn syrup), soy beans (think vegetable oil), and wheat.  Now would be a good time to look at whether those subsidies might be better spent on other fruits and vegetables.

2.  Soda tax
Some have suggested taking a similar approach to unhealthy food as we do to tobacco.  Smoking rates have dropped dramatically in recent years, thanks to increased public awareness about the dangers of tobacco use, and taxes increasing the price of cigarettes.  Health policy researchers have proposed a similar tax on soda and other sweetened drinks, and Obama has said he’s open to the idea of a soda tax.

Beverage companies have complained that their industry is being unfairly targeted, but consider this: obesity rates in the United States didn’t start to increase until about 1980.  Around the same time two other things happened: high fructose corn syrup was rapidly introduced to many foods and drinks; and soda consumption began to increase.  In the same period of time that obesity rates have doubled, soda consumption has also doubled. We’re not suggesting that soda is the only cause of the rise in obesity, but it certainly has contributed.

3.  Improve access to healthy food in communities that are particularly at risk
Communities with little access to fresh fruit and vegetables unsurprisingly have higher obesity rates.  There are a number of ways to deal with this, and many are Michael Pollan’s ideas so, so we’ll let him explain:

Making it easier and cheaper for these communities to get fresh fruit and vegetables will undoubtedly improve their health.

4.  Restrictions on food and beverage marketing to children
In a 2005 report, the Institute of medicine came to the conclusion that:

“Food and beverage marketing practices geared to children and youth are out of balance with healthful diets and contribute to an environment that puts their health at risk.”

In an attempt to avoid government regulation, some of the biggest food companies have already stopped advertising some foods on children’s shows, if the foods don’t meet certain nutritional standards.  But there are a number of loopholes.  For example, the self-imposed ban applies to the cereal Trix, but not Cocoa Puffs, which has one gram less sugar per serving.  And the companies continue to advertise all their products, regardless of nutritional content, on shows that are cater to “families” not just children.

According to the New York Times:

That qualifier amounts to a major loophole, given the media-watching habits of children. An episode of Nickelodon’s “SpongeBob SquarePants,” for instance, is viewed by an average audience of 876,000 children age 6 to 11, according to Nielsen Media Research, and falls in the category of shows that are off-limits to ads for junk food. But “American Idol” from Fox, which qualifies as a family show, attracts 2.1 million children in the age group.

Stricter regulation on advertising to children, done by an independent group, would go a long way towards making sure kids aren’t being overwhelmed with messages telling them to eat junk food.

Why aren’t these things in the health reform bill?
The soda tax and provisions to reduce subsidies for unhealthy food weren’t included in the health reform bill– probably because there were enough special interest groups trying to kill the bill; Democrats didn’t want to add beverage companies and the entire agriculture industry to the list.  And more generally, the focus of health reform has always been on reducing costs by making care more affordable when people get sick, not reducing costs by making sure less people get sick in the first place.

Health-care reform is, in practice, health-care-system-spending reform. Politicians promise that their plans will “bend the curve” and pursue “universal coverage.” They do not promise the plans will make everyone healthier, reduce infant mortality, or set targets for life expectancy.