Warning: Use of undefined constant wp_cumulus_widget - assumed 'wp_cumulus_widget' (this will throw an Error in a future version of PHP) in /home/customer/www/whatifpost.com/public_html/wp-content/plugins/wp-cumulus/wp-cumulus.php on line 375
 What you should know about insurers’ proposed rates for next year
≡ Menu

What you should know about insurers’ proposed rates for next year 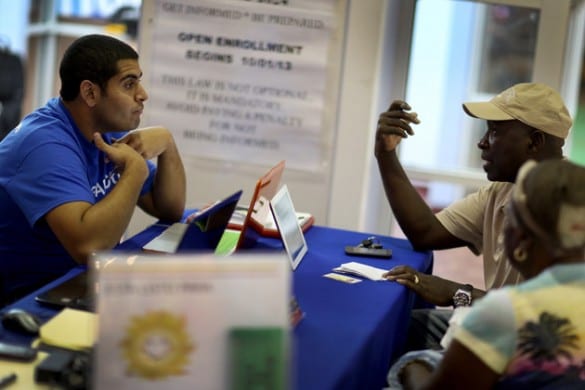 A reader in Louisiana writes us:

This was in the local paper.

Basically Blue Cross is saying that claims are up this year so they want to increase premiums on ACA policies. Have you been seeing this in other states? Is this increase in claims really unexpected?

Your insight appreciated as always!

They’re both good questions, and as insurers release their planned rates for 2015, we’re starting to get a sense of how Obamacare premiums will be changing across the country. Here’s what you should know.

Back in late-March, conservatives were pointing to an article headlined “O-Care premiums to skyrocket,” quoting an anonymous insurance official who worried that enrollees in the exchanges were older and sicker than expected. As Jonathan Cohn at The New Republic notes, “References to Obamacare premiums ‘doubling’ and even ‘tripling’ were all over the right-wing press.”

The Obama administration’s response was basically to tell everyone to calm down, because many more young people would sign up closer to the deadline… which is exactly what happened. The last minute surge of enrollments outpaced even the most optimistic estimates.

And so, far from rates “doubling” or “tripling,” the largest proposed (and the “proposed” part is important- more on that in a bit) increase we’ve seen is from CareFirst in Maryland, which asked for a hike of 30%. On the other hand, we’ve also seen a number of insurers who are planning to lower their premiums next year.

2. There’s a ton of variation in changes to insurance plan premiums

From an excellent post in National Journal by Sam Baker:

There are wild variations among different insurance plans. In Oregon alone, one plan wants to cut its premiums by 21 percent, while another wants to raise its rates by 28 percent. The extremes make for easy talking points (“Look how much premiums are going up!” “No, they’re going down!”), but they don’t reflect the experience most people will have when it’s time to pony up for plans: The average Oregon insurance premium will rise by 2.2 percent.

You can see that same variation in Maryland– where CareFirst asked for a 30% increase, another large insurer wants to cut its premiums by 12%.

3. There are both legitimate and somewhat sketchy reasons for insurers raising rates

The main reason for all the variation is that when insurers submitted plans for 2014, they were entering a totally new system and didn’t really know what the market would look like. Insurers who thought that their risk pool would be sicker are now lowering premiums to make their rates more competitive, while those who expected healthier enrollees will have to raise premiums to avoid losing money. There was also the Obama administration’s “If you like your plan, you can keep it” fix says Cohn:

As you may remember, the Obama Administration in late 2013 told state officials they could effectively expand the law’s “grandfather” provision, so that people who had ultra-cheap plans before 2014 could hold onto them. Some officials said no thanks. Others made the change. Now insurers in those states say healthy people are clinging to the old plans, which means the people buying the new ones tend to be in worse health.

So to answer our reader’s question, it is possible that Blue Cross in Louisiana guessed too low when they set premiums and really did see more claims than they expected. However, there’s another possible reason behind some of the big rate increases that insurers don’t want to mention. For some insurers, the strategy might have been to set prices super low at first, sign up a ton of customers, and then raise rates this year. The idea is that most customers won’t shop around, or will stick with their plan because switching is a hassle.

We should also point out that insurers don’t have a ton of claims data to work with yet– remember open enrollment ended just a few months ago– so there’s still a lot of guesswork in all of this.

4. Proposed increases are just that: proposals

Even though an insurer might ask for a big rate increase, that doesn’t mean it’s going to get it. Under Obamacare’s rate review provision, any time an insurer wants to increase premiums by more than 10%, it has to submit its proposal to the state and federal government for review, which is publicized. If the requested increase is still found to be “unreasonable,” some states have the power to deny it. (Not every state though– states had to pass laws giving their insurance commissioners the authority to deny rate increases, and some, like Louisiana, chose not to, because you know, Obamacare.)

In states that do have the power to reject proposed rates, some insurers are intentionally asking for bigger increases than they’re likely to get, in order to give themselves a more favorable position in negotiations. That may be why on the Republican senators’ list of “hefty rate increases,” nearly all are from states where insurance commissioners can (and most likely will) lower the final premiums.

So take Maryland for example. Last year, the state found that in most cases insurers were asking for too much, and didn’t approve their proposed rates. It slashed one company’s proposed rate for a silver plan by more than $200, from $696 to $470, so it’s highly unlikely that CareFirst’s big 30% increase request for this year will be approved as is.

5. The overall trend is positive so far– but pay attention to the math

The big question is what’s gonna happen to an average person’s Obamacare premiums next year, but there are a bunch of ways to calculate that.

1. Average plan price. This is the easiest way– you look at premiums for every plan in a state, add ‘em all up, and divide by the number of plans. Then you can compare that price with whatever it was last year. That’s the approach that Avalere Health consulting group took– it looked at proposals for silver plan premiums in nine different states, and found that the average premium was rising from $324 to $350, or just 8%.

2. Weighted average. Simply calculating the average plan price has its drawbacks. As Charles Gaba of the website ACAsignups.net explains:

Consider 2 companies, one asking for a 1% increase and the other asking for a 20% increase. The unweighted average is 10.5%, but that doesn’t mean much if the 2nd company has 95,000 enrollees and the first company only has 5,000.

It probably makes more sense then to do a weighted average. That’s where plans that have more enrollees count more towards the average premium than those with relatively few enrollees.

An analysis by PriceWaterhouseCoopers (more on their methodology here) found that the weighted average increase nationally is just 7.5%. (To put that number in perspective, before Obamacare, premiums on the individual market were increasing by 15% annually.) You can see the results for individual states on this map: 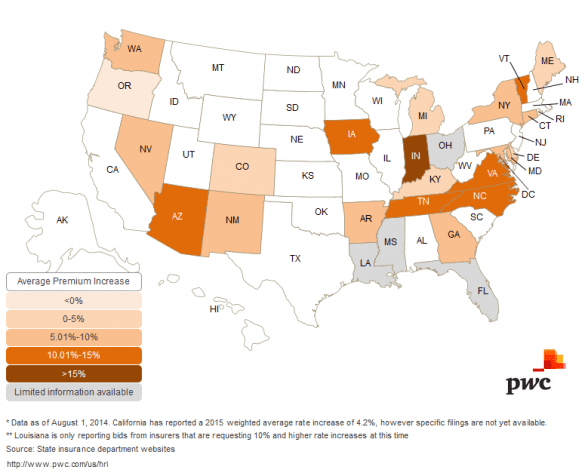 [There’s an interactive version where you can click on individual states for more details on their website.]

3. Benchmark plans. Weighted average alone might not be the best way to look at how premiums are changing either. For example, Florida is reporting that the weighted average plan rate will increase by 13.2% in 2015, but as Politico reports, that’s not the whole story:

An administration official painted a different picture by looking at the changes to the benchmark plans, or the second-cheapest silver plans on which subsidies are based. The average benchmark plan premium in each county will go down by 4 percent in Florida, weighted by population, according to White House math, and some big metro areas like Miami, Orlando and Palm Beach will have bigger declines. In total, 75 percent of Floridians live in areas where the benchmark premium will be less in 2015 than 2014, the White House contends.

Remember that the promise of the Affordable Care Act wasn’t that your insurance rate would never change–  it’s that you’d be able to shop around for the best deal without worrying about getting rejected based on your health status. So it probably also makes sense to compare the benchmark silver plans in a given area from last year to this year. Unfortunately, there’s little data on that right now.

Regardless of how you calculate it though, it’s still too early to say what will happen to average premiums next year anyways. Many states haven’t released price info yet, and for those that have, the final rates will almost certainly be lower. What we can say for certain though is that the predictions of doom from conservatives– rates doubling or tripling leading to an Obamacare death spiral with insurers abandoning the exchanges– just aren’t happening.

UPDATE: Over at the Association of Health Care Journalists blog, there’s a fantastic (and short) article on how to understand the 2015 Obamacare rate changes. It’s aimed at journalists who cover healthcare, but really anyone who’s interested in this issue will find it useful.